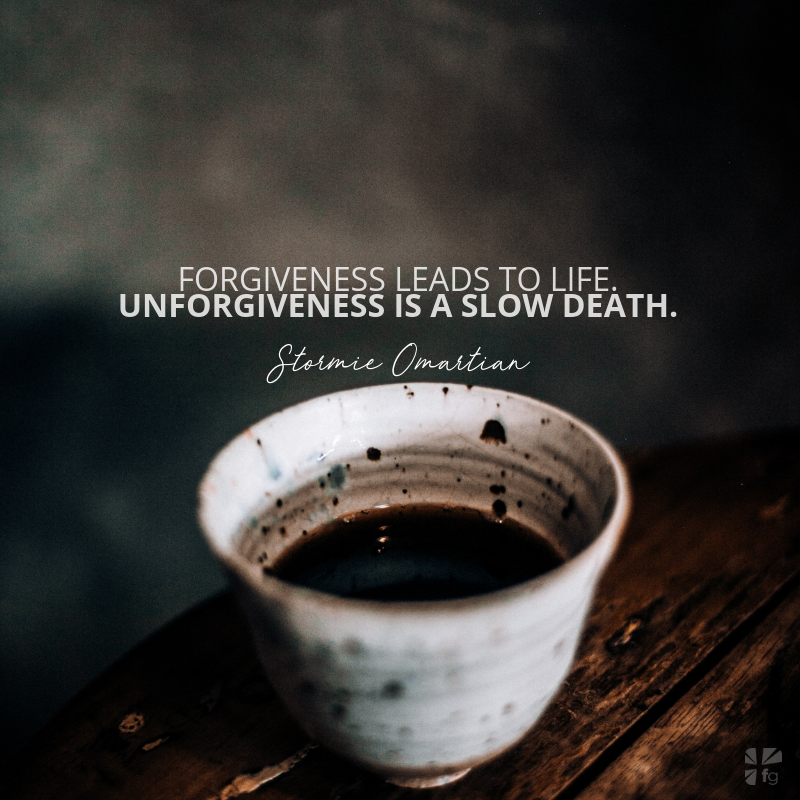 I struggled with forgiving my mother for years. Even after I became an adult she continued to be abusive, and I had to forgive her on a daily basis. Sometimes I stayed away from her and just let my dad deal with her by himself. Unfortunately she turned her anger toward him. When he became ill with a lung infection, instead of trying to help him, she would prepare her own meals and eat them in front of him without offering him anything. She said if he was hungry he could get up and get his own food.

When I found out all of this, I was very upset with her. What a turn of events. I had spent all those years trying to forgive her for being cruel to me, and now I had to forgive her for the way she treated my dad. There certainly didn’t seem to be any way to change the situation. We’d tried to get my father to hospitalize my mother, but when he came to sign the papers, he couldn’t do it. He still hoped that someday she would return to being the person he thought he had married.

Lord, I prayed, I know my mother is mentally ill and doesn’t really know what she is doing. But there is still something in me that thinks she does and that makes me mad. I again ask You to give me a forgiving heart toward her.

The Lord answered that prayer time and again as each new offense brought more reasons to forgive. I know that I never could have heard God’s leading for my life if my heart and mind had been clouded with unforgiveness.

Forgiveness leads to life. Unforgiveness is a slow death.

Not forgiving someone doesn’t jeopardize your salvation and keep you out of Heaven, but it does mean you won’t enjoy all that God has for you. And you may find yourself wandering around outside the center of God’s will.

The first step to forgiving is to receive God’s forgiveness and let its reality penetrate the deepest part of your being. When we realize how much we have been forgiven, it’s easier to understand that we have no right to pass judgment on one another. Being forgiven and released from everything we’ve ever done wrong is such a miraculous gift, how could we refuse to obey God when He asks us to forgive others as He has forgiven us? Easy! We focus our thoughts on the person who has wronged us rather than on the God who makes all things right.

Forgiveness is a choice that we make.

We base our decision not on what we feel like doing but on what we know is right. I did not feel like forgiving my mother. Instead I chose to forgive her because God’s Word says,

That verse also says that we shouldn’t judge if we don’t want to be judged ourselves.

Forgiving Yourself and God

While forgiving others is crucial, forgiveness is also needed in two other areas. One area is forgiving yourself. So many of us think, I should be achieving this; I should be this kind of person; I should have done more than I have by this time in my life. I certainly was burdened by these kinds of thoughts.

God is the only one who is perfect. We have to be able to say, “Self, I forgive you for not being perfect, and I thank You, God, that You are right now making me into all that You created me to be.”

Some of us have to forgive ourselves for the mistakes we have made. Before I came to know the Lord, I wasted my life doing drugs, dabbling in the occult, and getting involved in unhealthy relationships. When I was finally able to forgive myself, I realized that God could use even those experiences for His glory. I am now able to speak into the lives of women who have committed these same errors. They see that what God has helped me to overcome is possible for them too.

Besides forgiving others and yourself, you must also check to see if you need to forgive God. If you’ve been mad at Him, say so.

“God, I’ve been mad at You ever since my brother was killed in that accident.”

“God, I’ve been mad at You since my baby died.”

“God, I’ve been mad at You ever since I didn’t get that job I prayed for.”

Be honest. You won’t crush God’s ego. Release the hurt and let yourself cry. Tears are freeing and healing. Say, “Lord, I confess my hurt and my anger, and my hardness of heart toward You. I no longer hold that against You.”

Forgiveness is ongoing because once you’ve dealt with the past, constant infractions occur in the present. None of us get by without having our pride wounded or being manipulated, offended, or hurt by someone. Each time that happens it leaves a scar on the soul if not confessed and dealt with before the Lord. Besides that, unforgiveness also separates you from people you love. They sense a spirit of unforgiveness, even if they can’t identify it, and it makes them uncomfortable and distant.

You may be thinking, I don’t have to worry about this because I have no unforgiveness toward anyone. But forgiveness also has to do with not being critical of others. It has to do with keeping in mind that people are often the way they are because of how life has shaped them. I began to truly forgive my mother when I realized how difficult her childhood had been and what problems she had faced as she grew to adulthood. We all need to remember that God is the only one who knows the whole story, and therefore we never have the right to judge. Being chained in unforgiveness keeps you from the healing, joy, and restoration that are there for you. Being released into the future God has for you means letting go of all that has happened in the past.

Lord, I know that You have forgiven me for my sins of _______. I thank You for Your unconditional love and grace. I am truly repentant and wish to overcome these tendencies. Now, Father, help me forgive myself. Erase my guilt and create a new heart within me.

Help me see things from Your perspective. I know You are a good God and have my best interests in mind at all times. Forgive me for holding this against You. Heal me of my disappointment.

Lord, _________ has hurt me in this way: _________. I do not understand why this has happened, but I know that You want me to forgive (him/her). Help me walk in (his/her) shoes and understand what would make (him/her) do or say this. Help me be completely released from all un- forgiveness.

And whenever you stand praying, if you have anything against anyone, forgive him, that your Father in heaven may also forgive you your trespasses. — Mark 11:25

Let all bitterness, wrath, anger, clamor, and evil speaking be put away from you, with all malice. And be kind to one another, tenderhearted, forgiving one another, even as God in Christ forgave you. — Ephesians 4:31–32

He who loves his brother abides in the light, and there is no cause for stumbling in him. But he who hates his brother is in darkness and walks in darkness, and does not know where he is going, because the darkness has blinded his eyes. — 1 John 2:10-11

Forgiveness isn’t automatic! But, since we want wholeness in Jesus Christ, we’ve got to pray our way through hurt, offense, and anger. Who do you need to forgive today? Come share with us on our blog. Let’s pray together to be freed!