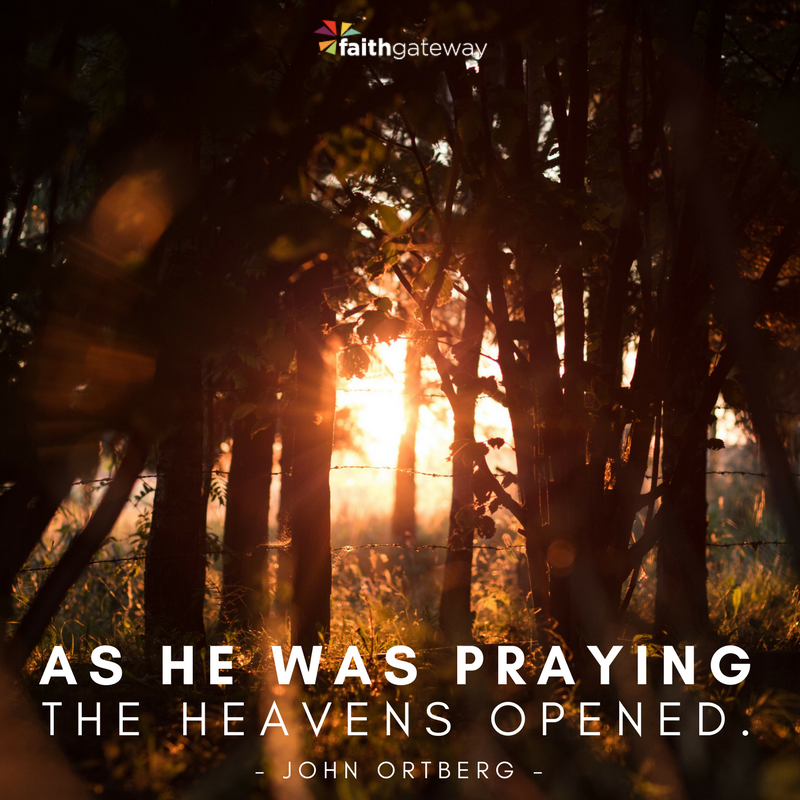 Jesus prayed. We are told that when He was baptized,

as He was praying, the heavens opened

and the Spirit came upon Him. The flow of the Spirit is closely connected to prayer, and Jesus immediately went into forty days of fasting and prayer.

Jesus prayed when His life was crowded and draining. After He began His public ministry, privacy became difficult.

The news about Him spread all the more, so that crowds of people came to hear Him and to be healed… But Jesus often withdrew to lonely places and prayed.

Jesus prayed when He faced important choices. When it was time to select His closest friends, He sought guidance.

One of those days Jesus went out into the mountainside to pray, and spent the night praying to God. When morning came, He called His disciples to Him and chose twelve… [as] apostles…

Jesus prayed when he was sad or frightened. During Jesus’ ministry His cousin, John the Baptist, was arrested and eventually executed.

When Jesus heard what had happened, He withdrew… privately to a solitary place

to be alone with His Father.

Jesus prayed when He needed strength for His work. One morning,

while it was still dark, Jesus got up, left the house and went off to a solitary place where He prayed.

When Simon Peter came looking for Him, Jesus said,

Let us go somewhere else — to the nearby villages — so I can preach there also. That is why I have come.

Jesus prayed when He was worried about people He loved. When He was about to die, Jesus knew that His disciples would fail. He told Simon Peter,

Satan has asked to sift all of you as wheat. But I have prayed for you, Simon, that your faith may not fail. And when you have turned back, strengthen your brothers.

Jesus prayed when He faced an insurmountable problem. “Jesus went out as usual to the Mount of Olives, and his disciples followed him.” He said, “Pray that you will not fall into temptation.” Then “He withdrew about a stone’s throw beyond them, knelt down, and prayed,

Father, if you are willing, take this cup from Me; yet not My will, but Yours be done.

When Jesus prayed, things happened. One time He took Peter, James, and John with Him up on a mountain to pray, and

as He was praying, the appearance of His face changed, and His clothes became as bright as a flash of lightning.

I often find myself feeling guilty when I read those descriptions of Jesus at prayer, but I am not sure guilt helps us pray much more over the long haul. So consider this question: Do you think Jesus prayed a lot because He wanted to pray, or because He thought he should pray?

If you ever feel guilty about your praying, know that someone who is better at it than you is already at work. Scripture says, “God’s Spirit is right alongside us helping us along. If we don’t know how or what to pray, it doesn’t matter. He does our praying in and for us, making prayer out of our wordless sighs, our aching groans. He knows us far better than we know ourselves … and keeps us present before God.”

I think Jesus wanted to pray. I think that for us to pray much, or deeply, we need to move from what we think we should do to what we want to do. But that won’t happen if we simply tell ourselves that we have to pray more. So let us put “shoulds” aside for a moment.

How can we begin to pray in a way that will help us want to pray?

Almost twenty years ago, I felt frustrated at my own lack of prayer. So I found a kind of prayer coach, who advised me to spend a few moments after praying just jotting down what had gone on while I was praying. The single most frequent observation for me was that while I was praying I was aware of being very tired.

“Did you tell the Lord about this?” my coach asked. “No.” “Do you think it would be a good idea to talk to Him about this?” “Yes.” I began to learn that although I was trying to set aside time to pray, I had a hard time being fully present. We all know what it is to be with another person when their mind is a million miles away. I began to think that is how God felt when I was praying. After a period of frustration, my prayer coach had the suggestion I mentioned earlier; to go outside alone and simply invite Jesus to come with me.

The next day I went to the ocean, took my shoes off, started to run, and invited Jesus to come along. I found the strangest thing. When I thought I was supposed to be talking to Him, I found it effortful and difficult. Now that all I had to do was invite him, I couldn’t stop thinking about Him. My mind kept reflecting on His being with me. I found myself wanting to point out the pelicans and the waves to Him. People and concerns would pop into my mind, and I would find myself telling Jesus about them.

Are you spending time alone with God? If prayer feels like something you should do rather than something you want to do, why not try John’s approach — invite Jesus to come with you! Come share your comments with us on our blog. We want to hear about your private times with Jesus!