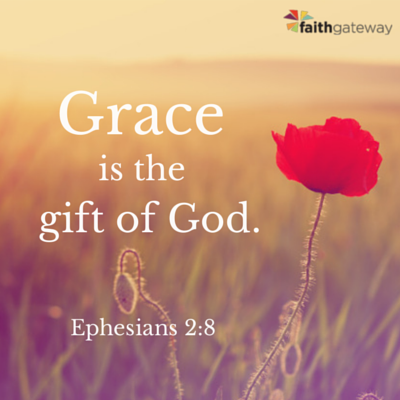 What a miserable man I am! Who will save me from this body that brings me death? I thank God for saving me through Jesus Christ our Lord! – Romans 7:24-25

When I was ten years old, I had a puppy named Tina. You would have loved her. She was the perfect pet. An irresistible, pug-nosed Pekingese pup. One ear fell over, and the other ear stood straight up. She never tired of playing and yet never got in the way.

Her mother died when she was born so the rearing of the puppy fell to me. I fed her milk from a doll bottle and used to sneak out at night to see if she was warm. I’ll never forget the night I took her to bed with me only to have her mess on my pillow. We made quite a pair. My first brush with parenthood.

One day I went into the backyard to give Tina her dinner. I looked around and spotted her in a corner near the fence. She had cornered a butterfly (as much as a butterfly can be cornered) and was playfully yelping and jumping in the air trying to catch the butterfly in her mouth. Amused, I watched her for a few minutes and then called to her.

What happened next surprised me. Tina stopped her playing and looked at me. But instead of immediately scampering in my direction, she sat back on her haunches. Then she tilted her head back toward the butterfly, looked back at me, then back to the butterfly, and then back to me. For the first time in her life, she had to make a decision. Her “want to” longed to pursue the butterfly which tauntingly awaited her in midair. Her “should” knew she was supposed to obey her master. A classic struggle of the will: a war between the “want” and the “should.” The same question that has faced every adult now faced my little puppy.

And do you know what she did? She chased the butterfly!

Scurrying and barking, she ignored my call and chased that silly thing until it flew over the fence.

That is when the guilt hit.

She stopped at the fence for a long time, sitting back on her hind legs looking up in the air where the butterfly had made its exit. Slowly, the excitement of the chase was overshadowed by the guilt of disobedience. She turned painfully and walked back to encounter her owner. (To be honest, I was a little miffed.) Her head was ducked as she regretfully trudged across the yard. For the first time in her life, she felt guilty. She had violated her “should” and had given in to her “want.” My heart melted, however, and I called her name again. Sensing forgiveness, Tina darted into my hands. (I always was a softy.)

Now, I may be overdoing it a bit. I don’t know if a dog can really feel guilty or not. But I do know a human can. And whether the sin is as slight as chasing a butterfly or as serious as sleeping with another man’s wife, the effects are the same. Guilt creeps in on cat’s paws and steals whatever joy might have flickered in our eyes.

Confidence is replaced by doubt, and honesty is elbowed out by rationalization.

Just as the pleasure of indulgence ceases, the hunger for relief begins. Our vision is shortsighted, and our myopic life now has but one purpose—to find release for our guilt. Or as Paul questioned for all of us, “What a wretched man I am! Who will rescue me from this body of death?” (Romans 7:24).

That’s not a new question. One hardly opens the Bible before he encounters humanity coping, or more frequently, failing to cope, with guilt. Adam and Eve’s rebellion led to shame and hiding. Cain’s jealousy led to murder and banishment. And before long, the entire human race was afflicted. Evil abounded and the people grew wicked. The heart of man grew so cold that he no longer sought relief for his callused conscience. And, in what has to be the most fearful Scripture in the Bible, God says that He was sorry that He had made man on earth (Genesis 6:6). All of this from man’s inability to cope with sin.

If only we had a guilt-kidney that would pass on our failures or a built-in eraser that would help us live with ourselves. But we don’t. In fact, that is precisely the problem.

When Adam was created, he was created without the ability to cope with guilt. Why? Because he was not made to make mistakes. But when he did, he had no way to deal with it. When God pursued him to help him, Adam covered his nakedness and hid in shame. Man by himself cannot deal with his own guilt. He must have help from the outside. In order to forgive himself, he must have forgiveness from the One he has offended. Yet man is unworthy to ask God for forgiveness.

That, then, is the whole reason for the cross.

The cross did what sacrificed lambs could not do. It erased our sins, not for a year, but for eternity. The cross did what man could not do. It granted us the right to talk with, love, and even live with God. You can’t do that by yourself. I don’t care how many worship services you attend or good deeds you do, your goodness is insufficient. You can’t be good enough to deserve forgiveness. No one bats a thousand. No one bowls three hundred. No one.

Not you, not me, not anyone. That’s why we have guilt in the world.

That’s why we need a Savior.

You can’t forgive me for my sins nor can I forgive you for yours. Two kids in a mud puddle can’t clean each other.

What my little puppy needed was exactly what you and I need – a Master who would extend His hands and say, “Come on, that’s okay.” We don’t need a master who will judge us on our performance, or we’ll fall woefully short. Trying to make it to heaven on our own goodness is like trying to get to the moon on a moon beam; nice idea, but try it and see what happens.

You need a Savior.

Regardless of how many times we’ve heard about the grace of God, we often struggle to accept that His grace is a no-strings-attached offer. Have you ever hesitated to accept God’s offer of forgiveness because of shame or guilt? Join the conversation on our blog! We would love to hear from you! ~ Devotionals Daily