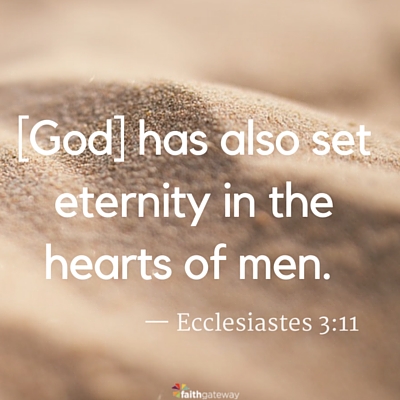 Why do most people believe in some kind of life after death, even if they aren’t particularly religious or don’t think about it very much?

God has put within each of us an inner sense that life on earth is not all there is. The Bible answers this so clearly:

[God] has also set eternity in the hearts of men. — Ecclesiastes 3:11

People may suppress this truth or deny it, but our conscience still speaks. The “still small voice” of God tells us – down deep – that it is still true (1 Kings 19:12). We must never ignore that inner voice – but rather, check what we believe it is saying alongside Scripture, where He reveals these truths.

The apostle Paul wrote about this danger of denying God’s truth:

What may be known about God is plain to them, because God has made it plain to them. For since the creation of the world God’s invisible qualities – His eternal power and divine nature – have been clearly seen… so that men are without excuse. — Romans 1:19–20

The reason we have this inner conviction that death is not the end — and that Heaven exists — is because we were created in the image of God.

We aren’t simply physical beings; we also have a soul (or spirit), and we bear within us the likeness of our Creator. That likeness has been marred and distorted by sin – but it is still there. And just as God is eternal, so we sense in our hearts that we too must be eternal. The Bible says that God lives forever (Isaiah 57:15). Just as God lives forever, we who are made in His likeness will also live forever.

My prayer is that you will exercise your God-given right to search the Scripture and to seek the One who died for you. Don’t give up on God. Instead, give up running from God – He hasn’t given up on you.

How do we know there is life after death?

We know there is life after death because God promised it, our souls bear witness to it, and most of all, Jesus Christ confirmed it by His life, death, and resurrection. So just look at Jesus.

By His resurrection, the Bible says, Jesus Christ destroyed death and has brought life and immortality to light through the gospel (2 Timothy 1:10).

Every phase of Jesus’ life was miraculous. He set aside His deity, came down to earth, and put on the garment of human suffering. He healed the sick, raised the dead, fed the hungry, quenched the thirsty, and comforted the dispirited with hope for tomorrow. In His compassion for us, He gave up His life to save wandering souls in a confused and dying world. Then He rose again and rejoiced to walk among us as the resurrected Savior, guaranteeing eternal life to all who follow Him.

Look at Jesus. He lived in Heaven and on earth. He died on earth and returned to life again, which was witnessed by more than five hundred people (see 1 Corinthians 15:3–8) before returning to Heaven. He lives in the hearts of those who trust in Him. Our confidence in life after death comes from these very truths.

Someone who visited the Billy Graham Library noticed all the crosses displayed and said to her host, “Where is Jesus? Why isn’t He on the cross?” Her host smiled and said, “We do not worship a crucifix. Jesus died on the cross, but He did not stay on the cross… He lives!”

The reason life does not end with the grave is because eternity is ahead of us. God’s Son conquered death and lives to bring newness of life to all who call on His name (Romans 10:9). This is the hope of the ages!

Listen to the words of the highest authority:

I, Jesus, have sent my angel to give you this testimony… ‘Come!’… Whoever is thirsty, let him come; and whoever wishes, let him take the free gift of the water of life. — Revelation 22:16–17

Gaze at the empty cross and you will see the victorious life over death in Jesus Christ, for in Him “death has been swallowed up in victory” (1 Corinthians 15:54). If you do not know Him, will you call on Him today?

What does the resurrection of Jesus have to do with Heaven?

Believing in Heaven has no value if we don’t believe in the resurrection of the One who created Heaven and opened its gates to all who will enter.

Many people find it easier to believe in Heaven because they’ve heard about someone’s alleged vision, yet they’ll doubt that Jesus Christ was raised from the dead and lives in Heaven today. God’s Word is our true guide, for it alone points us to the resurrection of Jesus Christ from the dead. Jesus said to Nicodemus,

I have spoken to you of earthly things and you do not believe; how then will you believe if I speak of heavenly things? No one has ever gone into heaven except the one who came from heaven – the Son of Man. — John 3:12–13

Why is Jesus’ resurrection so important? Not only does it prove He was the Son of God and that there is life after death, but it assures us that death – our final enemy – has been defeated. The Bible summarizes this great truth in these words:

For the wages of sin is death, but the gift of God is eternal life in Christ Jesus our Lord. — Romans 6:23

A remarkable illustration in Scripture is the resurrection of Jesus’ friend Lazarus which took place in Bethany where Jesus was also anointed before His death. The Lord gives evidence of His power over the grave of others – and His own grave as well. After Lazarus had been in the grave four days, Jesus demonstrated His resurrection power by raising Lazarus from the dead. When He arrived at the tomb, He called with a loud voice: Lazarus, come forth! and Lazarus emerged from the grave and stood before the crowd (John 11:43). This proved Jesus’ power over death – also the truth of His promise to us:

Heaven comes to life for us because of Christ’s resurrection power. If you will sincerely search for Him, you will find new life in Christ. The resurrection is the fulfillment of the Word of God, and that fact authenticates Heaven!

What other questions about Heaven do you have? What are your favorite Bible passages that relate to Heaven? Share your thoughts and comments on our blog below! We’d love to hear from you. ~ Devotionals Daily