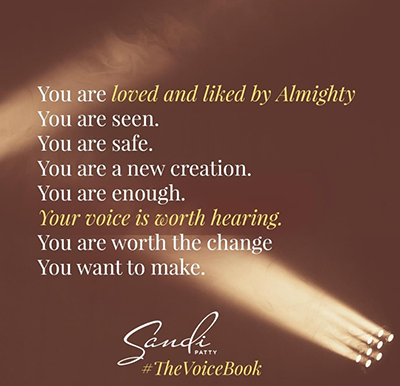 My dear friend Carolyn is a wise woman. We have been friends for many years. She’d been one of those faithful friends who stood by me when I decided to speak the truth about the sin and mistakes in my life. I wanted to be right and clean before the Lord and was submitting myself under the covering of my church to walk through the biblical restoration process. I had gone to those I needed to go to — including John, and Don’s wife, Michelle, to ask forgiveness. I was doing everything I knew to do.

Carolyn (who has since become a licensed professional life coach) and I were talking one day, and I was sharing with her the depth of my feelings of regret and disappointment in myself. “I feel such shame for so many of my choices,” I said. “I can’t escape the worry and concern for my kids and how I hurt my family.”

Carolyn said, “Sandi, you are carrying things that I thought you said had been laid at the cross.”

“I know. I know. But I don’t for one second take this lightly. I feel the weight of it with me all the time. God has forgiven me for my sin, I know. But sin has consequences, and the consequences of my sins haven’t gone away. That doesn’t mean I’m not forgiven. I am forgiven and I know it, but look at the price my kids and Don’s kids are paying — and will continue to pay. I want to walk in the light and in the truth of forgiveness, but the shame just clings to me.”

“Where are we going?”

“You’ll see,” she said. We took my car, and I followed her directions as I drove. We ended up at Lowe’s — of all places — and we walked directly to the garden and patio section. She walked over to the big square cement stones (the kind you make a pathway with) and said, “Okay, pick one.”

“Pick one what?” I asked. “Pick one of these stones. Make sure it’s heavy. We’re gonna buy it.” I attempted to pick one up, and boy, it was heavy. It was sixteen inches square and weighed about twenty-five pounds. I had no idea what we were going to do with it, but I carried it to the cash register and paid for it. Clearly, Carolyn had something in mind.

The nice young man at the register asked if I needed help get- ting it to the car, but before I could say, “Why, yes, I do. Thank you very much,” Carolyn piped in. “No, we’re fine. She can carry it.”

So I picked up that slab of cement and began walking to the car. It seemed to get heavier the farther I carried it. When I got to the car, I realized that my keys were in my purse.

“I’ve got to put this slab down to get my keys,” I said, looking around for a good place to set it on the ground.

“Well, the rules are,” she said (and I was thinking, Rules?), “you can’t put the stone down. You have to carry it with you everywhere you go.” So with some shuffling and anchoring my hip on the car door, I finally got my keys out. Now, of course, I had to drive. Fortunately, I learned there was one exception to the rule — I didn’t have to drive with the stone. (That just wouldn’t be smart.)

When we got back to my place, Carolyn asked, “What do you have to do next?”

“Well, I need to put in some laundry and get dinner started because the kids will be coming home from school soon.”

She said, “Okay, here’s the deal. Wherever you go and whatever you are doing throughout the day, you have to carry the stone with you.”

“I’m supposed to carry this stone with me?”

“You don’t get to comment or ask questions. Just do it.”

At first, I thought she was just playfully fooling around. Then I realized that she was quite serious. I was irritated at that point, but my respect for Carolyn outweighed my irritation, and I decided to follow her instructions.

Here are a few things that happened as the day wore on.

Because I was carrying the stone, I couldn’t hug the kids very well when they got home from school.

“Ask your Auntie Carolyn.” Because Carolyn was still there, making sure that I followed her instructions.

It took me so much longer to do the simplest of tasks — like start chili for supper. One arm was always holding the stone, so I had only one hand to work with. Then my arms got tired, and I got mad that I had to carry this stupid stone in the first place. After dinner I had to go to some school meeting, where I was completely and utterly embarrassed that I had to hold my precious stone for everyone to see, but there was no hiding it.

A Slab of Shame

I quickly (as I’m sure you have as well) surmised the point of this little exercise. It’s exhausting carrying around our slabs of shame. And tiring and humiliating and frustrating and inconvenient. It’s hard to do life when you’re constantly having to deal with a giant cement slab.

Finally, later in the evening, Carolyn said, “Why don’t you just put it down?”

I wanted to smack her. Now my pride was invested, and I wasn’t going to quit holding on to this stupid stone. I had to prove to her (and everyone) that I could hold it, that I could function while I carried it. And then she said again, “Why don’t you just put it down?”

Come to Me, all you who are weary and burdened, and I will give you rest. Take My yoke upon you and learn from me, for I am gentle and humble in heart, and you will find rest for your souls.

It was as if the Lord was saying to me, Sandi, why don’t you just lay down your shame? Bring it to Me. I know how weary you are. I know you are heavy with heartache and shame. You no longer need to carry that burden. Lay it down by giving it to Me.

“Oh, but God,” I prayed, “I don’t want anyone to think that by letting go of my shame, I am taking my choices lightly. I sinned. I had an affair. I got a divorce. I hurt people. I extinguished relationships. I need to pay. I’m a bad girl. It was all my fault.”

Suddenly I heard all of the voices of “me” over the years. The six-year-old girl, the “Fatty Patty,” the thick cheerleader, the girl who dumped her date on prom night, the girl who had an affair, the girl who filed for divorce. And then I heard again in my spirit,

Just lay it down. Give it to Me.

A verse came to my heart in that moment:

If we confess our sins, He is faithful and just and will forgive us our sins and purify us from all unrighteousness. — 1 John 1:9

Lay it down. Just lay it down, that still, small voice said.

I began to cry. “I want to put it down,” I said to Carolyn, “but now I’ve gotten used to it. I am tired of carrying it, though.”

“Then let me help you put it down,” she said, and I agreed. And with tears in our eyes, she helped me put down the slab. We just put it down, and I walked away. Well, it wasn’t exactly that easy because I had to find a place to discard it. Which is effort in itself. After all, you can’t just leave a slab in the hallway of your home. People would start tripping over it. Right? But we found a place to set it somewhere between the laundry room and the kitchen, gently, as if that slab had become an altar of surrender. The next day, I moved it to the back seat of my car, and for many weeks I carried it there as a powerful reminder that my slab of shame was no longer mine to carry but had been left at the foot of the cross.

Excerpted with permission from The Voice by Sandi Patty, copyright Sandi Patty.

What slab of shame are you carrying around? Is it heavy yet? Are you weary and burdened? Why not take it to Jesus and lay it down today? Why not confessed that sin and ask forgiveness from any people you need to ask forgiveness? Then, you don’t have to carry it around anymore. Come share your thoughts on getting rid of the burden of shame. We want to hear from you! ~ Devotionals Daily