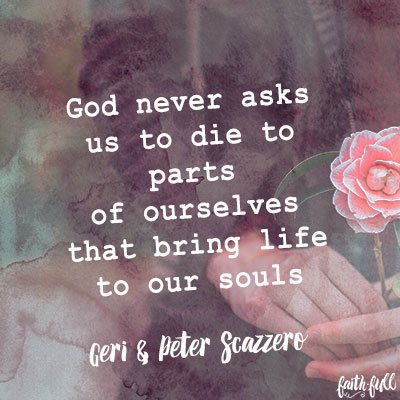 In my early Christian experience, I learned that a “good and loving Christian” embodied certain qualities. These messages were modeled and encouraged by the Christian subculture in which I was being formed spiritually.

I wanted to be a good, loving Christian no matter the cost. And I mistakenly believed that good, loving Christians were people characterized by five things: they never said no, they had an active social calendar, they juggled many things without complaining, they got things done, and they put others’ needs before their own.

They Never Say No

I did not understand the powerful, biblical principle of limits as a gift from the hand of God.1

God places boundaries around every living thing, including human beings. We are not created to be twenty-four-hour-seven-day-a- week machines. Our bodies and minds need sleep and rest. We have limits specific to our age, personality, marital status, children, gifts, education, family of origin, and economic status.

Yet I assumed that if a need crossed my path, then it was God’s will that I should meet it. This was obviously the right thing to do. I felt guilty if I didn’t.

Friend: “Geri, Can you give me a ride home?”

Geri: “Sure!”(Even though this will take me way out of my way and I am worn out.)

Church Member: “Geri, will you teach this Sunday school class? I was up late last night with my three-year-old and I’m not feeling well.”

Geri: “Sure!” (Even though I too am exhausted by my own small children.)

Pete: “Geri, can we have company for dinner?”
Geri: “Sure!” (Even though I prefer to be by ourselves.)

No matter what the request or need, no matter how depleted or empty I felt, I believed that a good and loving Christian would rarely say no.

They Have an Active Social Calendar

My active social life gave me a false sense of goodness and lovability. I mistakenly thought, “I’m a good Christian person if I have a lot of invitations.” The more social engagements I attended, the better I felt about myself.

Eventually, these invitations became a terrible burden because I felt compelled to say yes to all of them. How many birthday parties, showers, graduations, weddings, luncheons, dinners, and church events can one finite human being attend? Despite my need for solitude, I surrendered my calendar to the social obligations of our church, my large extended family, and our four young girls. It was a recipe for disaster.

They Juggle Many Things without Complaining

I felt this was the real test of my spirituality. Taking another Scripture out of context, I told myself that I can do all things through Christ who gives me strength [cf. Philippians 4:13] — and do them without complaining!

Actually, I ended up complaining a lot, but not clearly or directly. I never admitted, “Our lives are overwhelming, and I don’t want to live like this.” Instead, I whined and avoided people I was upset with. I typically complained to a third party instead of going to the person directly.

My juggling acts eventually overwhelmed me. I wanted out but felt powerless to do anything about it. I tried to pass my frustration to someone else, usually Pete. Is it any wonder I slipped in and out of depression?

They Get Things Done

Somehow I picked up the belief that the busier I was, the more spiritual and godly I must be. If I was unselfish and sacrificial with my time, then I must be a loving person. The apostle Paul seemed to get a lot done. So did Jesus. So did most of the so-called mature Christian women I knew at the time. I once had a Christian leader tell me he was going to work as much as possible until he died. “I’ll have plenty of time to rest in heaven,” he remarked. “For now, I’ll work as long and as hard as I can.”

I did get a lot done. The problem was I was also tired, resentful, and angry.

They Put Others’ Needs before Their Own

The guide for my Christian life was summarized in the acronym JOY:

I had always put others’ needs before my own, whether they were my husband’s or my children’s. I tried, unsuccessfully, to live out my narrow misunderstanding of Paul’s command in Philippians 2:3–4:

In humility value others above yourselves, not looking to your own interests but each of you to the interests of the others.

The problem was that it wasn’t working. I only grew more miserable as the demands of JOY slowly drained the authentic joy of Christ from my soul.

In the early years of my faith, most of my spiritual formation focused primarily on depravity and sin. The good seeds of God hidden beneath my unique person as an image-bearer of God were rarely mentioned. The human heart was considered deceitful only and never to be trusted.

Granted, every part of our being is flawed and disfigured by sin. Nonetheless, because of God’s image in us, goodness also dwells within every human being. That includes the religiously arrogant, criminals, the homeless, you, and me. Henri Nouwen describes it well:

For a very long time I considered low self-esteem to be some kind of virtue. I had been warned so often against pride and conceit that I came to consider it a good thing to deprecate myself. But now I realize that the real sin is to deny God’s first love for me, to ignore my original goodness. Because without claiming that first love and that original goodness for myself, I lose touch with my true self and embark on the destructive search among the wrong people and in the wrong places for what can only be found in the house of my Father.2

An unbalanced biblical theology fails to hold these twin tensions together, resulting in all sorts of confusion about dying to the right and to the wrong things.

Dying to the Wrong Things

As a result of these misguided beliefs, I died to the wrong things. I believed that putting others’ needs before my own was what it meant to die to self.

I wrongly died to a host of gifts God was inviting me to receive.

I mistakenly died to my delight and love for the out- doors — hiking, lakes, oceans, mountains. I love camping, yet with the intensity of serving Christ and Pete’s distaste for camping, I died to my love of nature … for seventeen years. While we have one lovely tree in our backyard, it is a long way from the great outdoors! As I routinely declined summer vacations at my parents’ beach house, my soul shriveled and my resentments grew. Even though I live in urban Queens, God never asked me to die to my love for beauty and the outdoors, even though getting there required a lot of work.

I mistakenly died to my need for silence and solitude. Solo parenting in the early years almost killed me. For years we lived next to a major highway and were forced to endure the sound of speeding cars all night long. With the constant noise and all the people coming in and going out of our home, there was little room for the silence and solitude I longed for.

I mistakenly died to my extended family. I missed significant family events because of church. I missed several women’s weekends when my cousins, sisters, and aunts went away together. I missed weddings and other weekend events. I didn’t value myself enough to ask Pete to rearrange his life so I could participate in these events. I mistakenly believed I was missing these events because of my commitment to Christ. Like a martyr, I meekly surrendered to my situation.

I mistakenly died to intentional personal growth. I did not develop my leadership gifts or pursue a graduate degree. I took a backseat, a supporting role — not out of a calling from God, but because of gender-based expectations of church culture and my family of origin.

And finally, Pete and I both mistakenly died to a great marriage. We did not know what we were missing. It takes time — lots of it — to grow and nurture a mature, intimate, mutually satisfying marriage. We received no training on what it meant to cultivate a great marriage, and there were few, if any, models for us to follow. We simply poured ourselves into loving others at the church and squandered the God-given joys of the first eight years of our marriage.

Have you mistakenly died to anything Christ has not asked you to die to? Pete and I regularly use The Prayer of Examen to help us discern if we are dying to the wrong things. We take a few minutes of silence, asking ourselves: “When did I feel most alive this past week? When did I feel the most life draining out of me?”3

Dying to the Right Things

God never asks us to die to parts of ourselves that bring life to our souls.

David, for example, was never asked to give up his love for music and writing poetry. As a busy king under enormous pressure, he could easily have not spent time composing psalms. We benefit, to this day, from his decision to keep writing.

But we are to die to the sinful parts of who we are — defensiveness, arrogance, hypocrisy, a judgmental spirit, finding our worth and value apart from him — as well as the more obvious sins such as gossip, lying, stealing, coveting, and so on. David did have to die to his lying, his concern about what others thought, and his placement of trust in his military power rather than God.4

For example, I needed to die to defensiveness and social shame, to a critical spirit, to the need to be right, to my fears of vulnerability and weakness, and to people’s approval. For most of my life, the thought of openly admitting my mistakes and vulnerabilities felt worse than death.

I remember crying on our living room couch with Pete as I wrestled with allowing myself to appear weak before others. It was terrifying, like being a trapeze artist flying high above the ground with no net underneath. Then, in the midst of my terror, I heard God’s still, small voice: “Geri, there is a net underneath you. It is the gospel. Christ died for you. You are so loved. You can be weak. You have nothing left to prove.”

The illusions about what it meant to be a good, loving Christian crumbled before me. Now I could begin to die to the right things — my self-protectiveness and fears of rejection. It was like being born again, yet again.

Excerpted with permission from The Emotionally Healthy Woman by Geri & Peter Scazzero, copyright Peter and Geri Scazzero. Published by Zondervan.

There are endless selfish and wrong things that we must die to in order to love God and love others. But, maybe we’ve lumped several other God-ordained things in the “die to” pile that don’t belong there! What are you dying to today? Dying to the right things, and not the wrong things, is essential to a life of faith. Come join the conversation on our blog! We want to hear from you! ~ Laurie McClure, Faith.Full