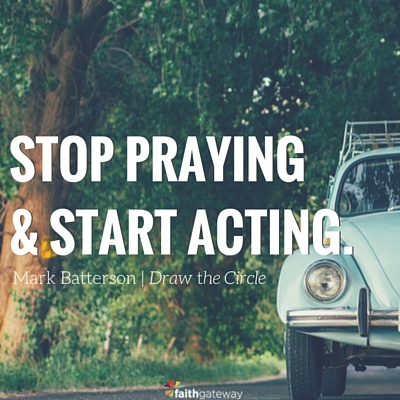 One of the defining moments in my prayer life happened a decade ago. I was in a small group with a friend who worked for InterVarsity Christian Fellowship at Georgetown University. Jeremy was working on a shoestring budget, and their campus ministry needed a computer. He shared the request at the end of our meeting, and I agreed to pray for it, but when I started praying for it, I felt that the Lord wanted me to stop praying. It was like the Holy Spirit said, “Why are you asking Me? You’re the one with the extra computer!” I quit praying in mid-sentence. I told Jeremy we didn’t need to pray about it because I had an extra computer he could have.

I wonder how many of our prayer requests are within our own power to answer? Yet we ask God to do what we can do ourselves. And then we wonder why God doesn’t respond. Maybe it’s because God won’t do for us what we can do for ourselves. God isn’t honored by prayers that are within the realm of human possibility; God is honored when we ask Him to do what is humanly impossible. That way, God gets all the glory!

There are some things we don’t need to pray about:

God has already spoken on those subjects.

There comes a moment when praying becomes a form of spiritual procrastination. It’s time to stop praying and start acting.

Quit praying about the program and fill out an application. Quit praying for the friend you hurt and make a phone call. Don’t just complain to God about your coworker; circle them in prayer. Don’t just pray for missionaries; write a check.

One of my heroes is Peter Marshall, the former chaplain of the United States Senate. His prayers at the opening of Senate sessions are timeless. Peter Marshall believed in an action-oriented approach to Scripture.

I wonder what would happen if we all agreed to read one of the Gospels, until we came to a place that told us to do something, then went out to do it, and only after we had done it… began reading again?…

We know perfectly well… but we don’t want to do it.

Please don’t misinterpret what I’m saying. Pray about everything. Then pray some more. But at some point, we have to quit praying and start acting.

One of the great mistakes we make is asking God to do for us what God wants us to do for Him. We confuse roles. For example, we try to convict those around us of sin. But that is the Holy Spirit’s responsibility, not ours. In the same sense, God won’t do for us what we can do ourselves. And many of us get stuck spiritually right there.

When Christianity turns into a noun, it becomes a turnoff. Christianity was always intended to be a verb — more specifically, an action verb. The title of the book of Acts says it all, doesn’t it? It’s not the book of Ideas or Words. It’s the book of Acts. And if we said less and did more, I believe we would have the same kind of impact the first-century church had. And while we’re on the subject, we should be more known for what we’re for than what we’re against.

Excerpted with permission from Draw the Circle by Mark Batterson, copyright Zondervan.

What thing popped immediately into your head when you understood what Mark meant by “Quit Praying”? Is there something you should be doing? Please share your comments on our blog today!