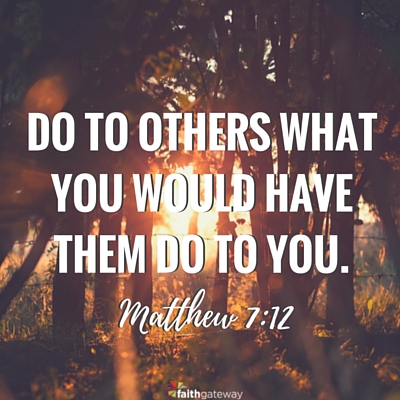 Darla took out her crayons and scrawled a letter to her heavenly Father:

Did you really mean, “Do unto others as they do unto you”? Because if you did, then I’m going to fix my brother!1

Little Darla isn’t the first person to creatively rewrite the Golden Rule. Politicians in Chicago have their own rendering: “Do unto others before they do unto you.” And everybody in the business world knows the famous corporate version: “Whoever owns the gold gets to make the rules.”

But those, of course, are corruptions of the Golden Rule that Jesus articulated in one of the most widely quoted Bible verses in the world. In what has been called the Mount Everest of ethics, the uppermost peak of the greatest sermon in history, Jesus said in the Sermon on the Mount,

So in everything, do to others what you would have them do to you, for this sums up the Law and the Prophets. — Matthew 7:12

He was explaining that if you want the Cliffs Notes summary of the Bible’s entire teaching on how to relate to others, this absolutely outlandish and revolutionary statement is it.

What’s more, He wasn’t saying that we should abide by this rule only when we feel like it, through random acts of kindness expressed on a whim, but that this should become a day-in, day-out lifestyle of compassion and caring.

No other religious leader had ever taught this before, which might surprise you because it’s commonly said that virtually every religious system in the world has its own golden rule. While it’s true many do, the difference is that every other religion I’ve seen had a weaker version that was expressed in a negative form. For instance:

And two decades before Jesus was born, a young student came up to the great Jewish Rabbi Hillel. “I’m ready to convert to Judaism,” he said, “on one condition — that you teach me the whole Law while I stand on one leg.” In other words, “Spare me all the complexities and intricacies, the nuances and the details — if you can’t boil down to a few words how we should deal with others, then I’m not interested.” So while the student was performing his impromptu flamingo imitation, Hillel replied, “What is hateful to yourself, do to no other; that is the whole Law, and the rest is commentary. Go and learn.”

As far as they go, those maxims might be helpful. But there’s a big difference between their negative approach and how Jesus intentionally crafted the Golden Rule. For instance, in some religious traditions the negative version is essentially based on selfish reciprocity — I won’t hurt you because I hope, in return, that you won’t hurt me. That’s just protecting your own self-interest, and there’s nothing especially admirable about that.

But by contrast the basis of the Golden Rule is selfless generosity.

Jesus was telling us to be caring toward others not to get something in return but regardless of whether the other person pays back the favor or not.

And here’s another significant difference: under the negative versions, a person could merely live a passive, detached, and uninvolved life by simply not doing harm to others. However, the Golden Rule calls on us to go on the compassion offensive by grabbing the initiative and deliberately choosing a policy of being kind toward other people. As Christian scholar D. A. Carson wrote,

The negative form would teach behavior like this: If you do not enjoy being robbed, don’t rob others. If you do not like being cursed, don’t curse others… If you do not care to be clubbed over the head, don’t club others over the head. However, the positive form teaches behavior like this: If you enjoy being loved, love others. If you like to receive things, give to others. If you like being appreciated, appreciate others. The positive form is thus far more searching than its negative counterpart. Here there is no permission to withdraw into a world where I offend no one, but accomplish no positive good, either.2

Someone once explained the difference this way: if you own a car, the negative rule would tell you, “Just don’t run anybody over. Don’t get drunk and cross the centerline.” The Golden Rule would include that admonition but would go even farther by saying, “When people need a ride, offer it to them. If the widow down the block needs to go to the grocery store, make yourself available. If a stranger is trying to get home, give him a lift. Make an effort to go on the lookout for ways you can serve people in a manner that you would want them to serve you.”

It’s this sweeping and countercultural quality that makes the Golden Rule so incredibly outrageous. In fact, just imagine what the world would be like if everyone were to live by it. The terror alert would go down to the safe “green” level. We wouldn’t have to lock our doors at night. We could send our kids to the park without worrying about them. Sales of automobile antitheft devices would plummet. We could shake hands on a business deal and feel supremely confident that we wouldn’t be double-crossed. There would be no office politics, no hurtful gossip, no racism, no drive-by shootings, no hate crimes, no suicide bombings or beheadings in the Mideast, no starvation or genocide in Africa, no corruption or double-dealing in Washington, D.C. Nobody would cut you off on the expressway, and during the winter all the people who own snowblowers would gladly clear everybody else’s driveways. We would live in a world of forgiveness, compassion, peace, goodwill — and even unfailing good manners!

Yet the world isn’t like that. And the problem isn’t that the Golden Rule is too esoteric or complicated to understand. “We do not do unto others as we would wish them to do unto us, because the whole time we are thinking only about ourselves, and we never transfer our thought to the other person,” said theologian D. Martyn Lloyd-Jones.

That’s the condition of the world because of sin: we’re primarily selfish people who are preoccupied with our own well-being.

Whenever most people go out of their way to help someone else, they have mixed motives. They always want to know what they’ll get out of the deal. It’s like the story of some children whose cat had recently delivered a litter of kittens. The youngsters peered into the cardboard box and watched in delight as the tiny kittens snuggled together.

“Aw, isn’t that cute?” exclaimed a little girl. “They love each other so much that they’re trying to keep each other warm.”

In contrast, here’s what the Golden Rule is all about: trying to keep somebody else warm, even if it means that we get cold in the process. As idyllic as it would be to live in a world where the Golden Rule was universally followed, we know that’s not going to happen. Despite the efforts of some people to promote National Random Acts of Kindness Week (a concept, ironically, championed by a congressman who was later convicted of the unkindly acts of extortion and tax evasion), one study showed that Americans are becoming more cynical and less compassionate.

Some people lose their good intentions in the face of everyday pressures and realities, as did the California motorist whose car had a license plate that included the word “Peace.” Police said that after she tailgated a slow-moving pickup truck on a two-lane canyon road, she pulled alongside the other vehicle, swatted at it with an aluminum baseball bat, and then threw a can of air freshener at it as she roared past. “She said she was in a hurry and was getting frustrated,” said the state trooper who ticketed her. When he asked about her license plate, “She told me she got it because she thought there was so much violence going on in today’s society.”

The Bible tells us that people naturally tend to balk at submitting to God’s laws and teachings, including the Golden Rule (Romans 8:7). And yet as Christ followers supernaturally empowered by the Holy Spirit, we can help change a little corner of our world if we put the rule into action.

How do we do that? As I’ve attempted to implement the Golden Rule in my own day-to-day living — admittedly, not always successfully — I’ve found that I frequently need to recalibrate my perspective. In a world that all too frequently revolves around me, I’ve got to purposefully reorient my attitude on a regular basis if I’m ever going to follow this outlandish teaching of Jesus.

“Do to others what you would have them do to you”. What an outrageous command! And yet, Jesus said that that’s the way we’re to relate with one another. Even when we don’t want to! Whom can you bless today by treating them the way you want to be treated? Let’s practice The Golden Rule today. Come share your thoughts with us on our blog. We want to hear from you! ~ Devotionals Daily