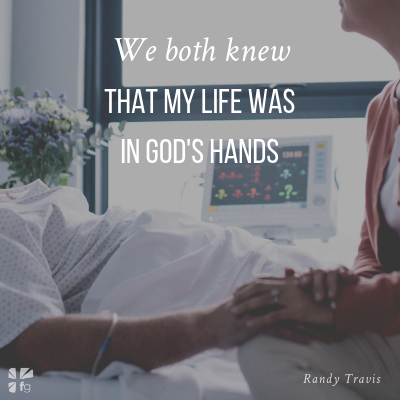 Editor’s Note: Randy Travis experienced tremendous success as a country and gospel singer. But in 2009, his seemingly charmed life began a downward spiral. His marriage dissolved, he discovered that his finances had unraveled, and his struggles with anger led to alcohol abuse, public embarrassment, and even police arrest in 2012. Then, just as he was putting his life back together, Randy suffered a devastating viral cardiomyopathy that led to a massive stroke which he was not expected to survive. Today’s excerpt from his new book Forever and Ever, Amen gives a brief glimpse into Randy’s story of a miraculous return from the brink of death and a redemption that can only come from above.

It was a sound I had become much too familiar with — the constant whirr of the machine that was keeping my collapsed lungs breathing, the incessant beep, beep, beep sound of the heart monitor. This was the soundtrack to the constant swirl of pensive doctors and nurses flitting in and out of my hospital room, poking one of my arms and then the other, taking more blood, running another test.

You should always be careful what you say in a hospital room when a patient is unconscious or in a coma. Don’t ever utter a negative statement about his or her condition because the person in the coma might well be able to hear you.

I know that is true. Because when I was in that state someone said the unthinkable:

“He can’t survive this.”

This wasn’t the first time my fiancée, Mary Davis, had heard such dire predictions. The doctors had given me less than a 1 percent chance of survival since I’d first entered the hospital in Texas more than six weeks earlier, unable to breathe, with a virus in my heart that had led to a massive stroke and emergency surgery in which a large portion of my skull was removed to relieve the pressure in my brain. That portion of my skull was now secured in a pouch made of my own skin and sewn into my abdomen so the skull tissue could be kept alive until it was safe to reposition it on my head.

The stroke had taken away my ability to speak clearly, and it had paralyzed my right side, so I could barely move. After three weeks in the hospital in Texas, we had transferred to a rehabilitation center in Nashville, where my lungs had collapsed, I had contracted a staph infection, and my body was now septic. At times, I was semiconscious at best and breathing with the help of a machine. I had spent more than six weeks in and out of a coma. A tracheotomy tube stabbed through my throat, and my head was covered with what looked like a 1920s football helmet.

By this point, the doctors had basically given up any hope of my survival, and they probably thought they were being compassionate by encouraging Mary to pull the plug.

Mary leaned in close to me at my bedside, where she had spent every day for the past two months. She pressed her hand into mine. “Honey, you have to let me know if you want to keep fighting,” Mary said.

I wanted to shout as loudly as I had ever bellowed, yet no words formed, no sound came out of my mouth. But a single tear trickled from my eye and down my face as I mustered every ounce of energy I had. I squeezed Mary’s hand.

Mary stood straight up, turned, and faced the doctors. “It’s not our choice…” She stopped short, the words caught in her throat. She couldn’t bring herself to say, “…to decide whether Randy Travis lives or dies,” but everyone in the room understood. She squared her shoulders and looked straight at the doctors. “I suggest that everybody get on board, and let’s do everything we can to save him.”

We both knew that my life was in God’s hands. Like me, Mary believed that God had plans for my life and that our faith would get us through. We just weren’t quite sure how.

But I had braved numerous storms in my life and had frequently faced overwhelming odds, times when others had advised me to give up. I hadn’t quit then — and I wasn’t about to quit now.

Just before Garth Brooks placed the medallion around my neck and pronounced me as the newest member of the Country Music Hall of Fame, he sang “Three Wooden Crosses” and honored me in his comments to the crowd. “Name me any artist from any genre in the history of all music,” Garth said, “who took a format and turned it one hundred eighty degrees back to where it came from and made it bigger than it has ever been before.”

Again, the audience burst out in applause.

With Garth on my right side and Mary on my left, I listened carefully and gratefully as Mary thanked everyone for me. “Randy stared death in the face,” Mary said, “but death blinked. Today God’s proof of a miracle stands before you…” She paused, momentarily overcome with emotion. “Okay,” she said, trying to regain her composure. From beside her I said, “Okay,” as well, and the crowd laughed, breaking the tension.

As I stood by her side, Mary said, “We smile every morning, and there are some nights that we cry, when we go to bed in frustration. We pray differently now, and we trust faithfully, and we fight on.”

She continued, “Every day we sing. It’s a special thing to hear Randy Travis sing, wouldn’t you agree?”

“Sometimes we sing the greatest redemption song of all time,” Mary said. “And it fills us with thankfulness. That song is ‘Amazing Grace.’ ”

Then in a heartfelt moment for all of us, Mary did something totally unexpected by everyone in the Hall — everyone but me, that is. Mary paused momentarily and then said, “Ladies and gentlemen, heroes and friends, tonight I want to give back to you the voice of Randy Travis.” Mary choked up a bit as she said, “If you would all join in with Randy singing ‘Amazing Grace.’ ”

I took the microphone and said, “Okay,” again with a nervous laugh.

Standing onstage behind me, Garth slipped up to my side. “Garth will help you,” Mary reassured me.

I was grateful for Garth’s presence, but I started the song strong all by myself. Meanwhile, Garth stood to my right, facing me. He teared up, tilted his head back, and closed his eyes. He joined me in singing but let me take the lead, “Amazing grace! How sweet the sound, that saved a wretch like me…”

No one at the ceremony other than Mary had known that I was going to sing — or that I could sing. Although I couldn’t pronounce all the words perfectly, the audience didn’t seem to mind. They spontaneously joined right in with me, and tears filled many eyes, Mary’s included. Charlie Daniels pulled out a handkerchief about the size of a tablecloth and started wiping his eyes and blowing his nose! Not far from him, the Oak Ridge Boys were all crying as well. Tears streamed down the faces of Raleigh and Cavanaugh too.

I made it through all four verses without prompting. Mary and I had been practicing for weeks so I could sing the entire song — a first since suffering the stroke more than three years earlier. At the close of the song, the crowd erupted in applause again, the entire audience appearing to rise to its feet in one motion. I was so blessed and honored. What valleys has God brought you through? What valley are you in now? How does Randy’s story of redemption inspire you? We’d love to hear from you in the comments!

To get the rest of the story from Randy Travis, get the book today… 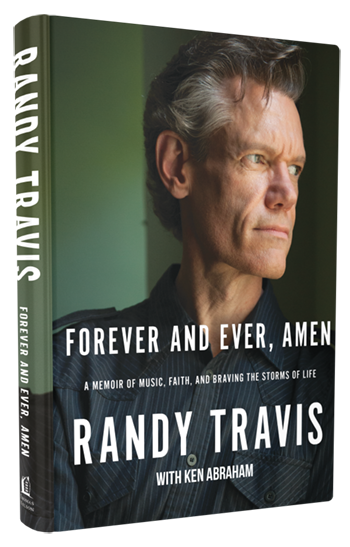