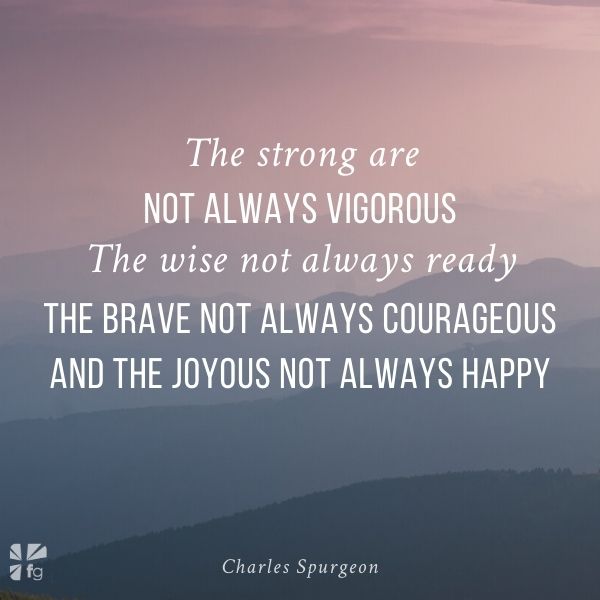 While many men who suffer from depression feel that somehow, and in some way, they are weak or deficient, I have found it most encouraging to reflect on great men who have suffered from depression. Many men from Scripture, including kings David and Solomon fell prey to it.

While for a period of my childhood Roy Rogers was my idol, the real male heroes of my life are not the John Wayne, Clint Eastwood, or Arnold Schwarzenegger-types. Nor do Indiana Jones, Robocop, or any Terminators of movie fame ring my bells. My heroes are men like John Wesley, Charles Spurgeon, John Calvin, and Martin Luther. You can also add men like Abraham Lincoln, Winston Churchill, Martin Luther King, and Nelson Mandela.

What is interesting about these men is that, besides being famous, they all knew about depression firsthand. And I mean serious depression. These men, despite their bouts with melancholy, achieved great things for God. Not only were they able to transcend bouts with depression, but they were able, like the apostle Paul, to turn their “affliction” into a force that drove them to compensate for their “down” times. What is really amazing is that they were able to survive major depressions at a time when there were absolutely no forms of treatment available. They were alone in their battles. In fact, until a mere fifty years ago, you were lucky not to end up in a mental institution if you had a severe depression.

Of the more recent great men who have suffered from depression, Sir Winston Churchill has always stood out for me. Always the underdog and an almost total failure by the time he was in his sixties, he found his moment of destiny in history had come when he was chosen to help the British Empire withstand the onslaughts of Hitler’s Nazism. His father and five of the seven dukes of Marlborough, his ancestors, suffered from depression, a clear sign of its genetic causes. All his life he suffered spells of depression, sinking into brooding depths of melancholy — he called it his “black dog.” Every day he chiseled his way through his duties praying for the relief that never came.

What is even more amazing and encouraging to me is how some of the great saints of God have suffered from depression. Is it possible that it was their very pain that made them what they became? They were by no means weak men. Luther’s great spirit was often in the seventh heaven of exultation, and as frequently on the borders of despair. According to Charles Spurgeon, the great British preacher of the latter part of the last century, even Luther’s very deathbed was not free from turmoil as he sobbed himself into his last sleep “like a great wearied child.”

Spurgeon, of all these great men of God, was the only one who seemed to understand the true nature of depression. One of his lectures to the young men at Spurgeon’s College, the seminary he founded, contains the following words of wisdom:

As it is recorded that David, in the heat of battle, waxed faint, so may it be written of all the servants of the Lord. Fits of depression come over the most of us. Usually cheerful as we may be, we must at intervals be cast down. The strong are not always vigorous, the wise not always ready, the brave not always courageous, and the joyous not always happy.

A man of extraordinary humor with a laugh that could single him out in an enormous crowd, Spurgeon knew from personal experience the depths of despair. He knew that some suffered from depression while others didn’t and had a sneaking suspicion that there were reasons for this. Depression was not God’s judgment for sin, nor was He was turning His back on a believer. It happened when one neglected oneself, when one was sick, when one was stressed out, when one didn’t get enough rest and sleep, when one was occupied in a sedentary lifestyle, when one was a “leader of men”—and sometimes for no discernible reason at all. “Causeless depression,” he said, “is not to be reasoned with… You might as well fight with the mist as with this shapeless, indefinable, yet all beclouding hopelessness.” And all this came just from very carefully observing himself. It is about as accurate a description of the causes of depression as I have ever seen or could come up with myself!

I share this account of great men who have suffered from severe depression as an encouragement to those men who may feel that their depression is a sign of a totally wasted life. It is not! You keep company with some of the greatest human beings that have ever lived!

Should Men Be Concerned About Depression?

My answer is simple and emphatic: yes. In any given year, according to the National Institute of Mental Health, three to four million men in the United States alone suffer from clinical depression. And the number is rising by the month.

While the risk of abandoning life is very high when you are depressed (I have seen too many suicides not to be acutely aware of how dangerous depression can be), suicide is not the only outcome risk of depression. As someone has said, “Those who don’t put a gun to their heads are liable to die in other untimely ways.” For instance, researchers at the John Hopkins School of Hygiene and Public Health have found that depression is a big factor in fatal heart attacks. It also increases blood pressure and cholesterol. The reason? We now realize that depression is a significant cause of stress. A recent study from Ohio State University suggests that depression increases men’s, but not women’s, risk of dying from heart disease.

But health and life are not the only reasons why men should be concerned about depression. When a husband or father is so incapacitated by depression that he will not own and get treatment for it, a whole family is cut down. When that husband or father is a Christian, his family’s spiritual well-being is often also placed in jeopardy, let alone his own. To put it bluntly, a man who is depressed, for whatever reason, who refuses to get treatment or attend to his depression, is not only harming his own life, but also the lives of those who love and want to care for him. If only you could hear the stories of despair, hopelessness, and abandonment I hear from wives, perhaps you might try a little harder to get help. Those nearest and dearest to you don’t deserve to be treated this way.

There is one more reason why men, all men, should be concerned about depression. There is so much nonsense in the beliefs of men, particularly nonsense about the nature and treatment of depression, that it is as if men, particularly Christian men, are still living in the dark ages. I’m serious. With so much information now available to all of us about how devastating depression can be, how can the truth just be ignored? True, depression is undiagnosed in more than two-thirds of the men who suffer from it, so the mental health professionals who ignore male depression have to bear some of the blame. But our Christian subculture is guilty of perpetuating some of the most archaic and distorted attitudes toward depression, distortions that cause a lot of unnecessary suffering.

Depression is a lot more common in men than statistics tend to show. Even when it is accurately diagnosed, the treatment will often be ineffective for several reasons: the wrong medication is being used, the dosage is incorrect, or the sufferer doesn’t follow through on the treatment (called “non-compliance” — the bane of every treating professional’s life). Often a particular type of psychotherapy is needed rather than medication, although some professionals are not adequately trained to discern this. It is no wonder, therefore, that many depressed men stand on the sideline and insist that this game is not for them! Treatment appears, to many of them, to be a hopeless endeavor, so they don’t even try!

Men should also be concerned about their own beliefs and feelings about depression because these will affect (I was going to say “infect,” which is equally true) the men around them, including their own sons. For most men, depression is something not discussed or talked about, and this silence surrounding depression actually perpetuates depression. I am talking about Christian men as much as I am about non-Christian. Many believe that if you live a “God-directed life,” you will never become depressed. Too many devout and deeply committed men have suffered through the centuries from depression for this to be true!

Fortunately, the prospect for recovery is better than it has ever been in history. While in times past depression was a devastatingly powerful disorder, it now need not be feared. This is the hope that I want to engender in my readers. Gone are the days when depression was a terrible thing to behold or experience. We can welcome a new hope for those who are depressed, born out of the discoveries we are now making. I see all healing discoveries that help to alleviate human suffering as “gifts from God.” After all, it is the brain He has provided us with that has made these discoveries possible. All that remains is for us to receive these gifts of healing, open the prison gates of our depression, and let ourselves free. We do not lack for help. What we lack is the courage to receive that help.

How have you or others encountered the “black dog” of depression? How does it bring you hope to know that so many great men of history have encountered bouts of depression in their lives? We’d love to hear your thoughts in the comments!