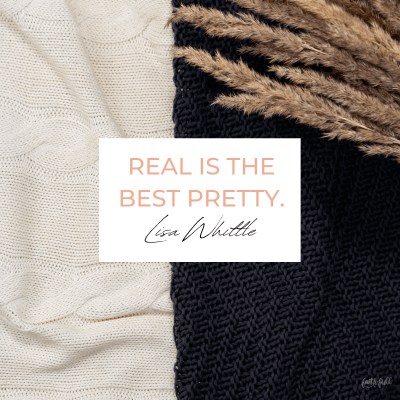 Their joy will be in doing what’s right and being themselves, and not in being affirmed by. — Galatians 6:4 TPT

I didn’t know until I was older that Jesus wasn’t a mirror image of that tall, dark, and handsome man with the well-groomed facial hair who hung on our family room wall in a gold-framed picture for years when I was growing up. It’s a picture my mind grapples with even today — the idea that He likely wasn’t good-looking enough to be TV’s next bachelor.

The Bible doesn’t tell us exactly what Jesus looked like when He walked this earth, but scholars have done their best to piece it together. Scripture we do have that supports His everyday-man look (“he had no form or majesty that we should look at him, and no beauty that we should desire him,” Isaiah 53:2 ESV) helps us conclude He wasn’t the world’s standard of physically attractive. It’s hard for us not to imagine the tall, good-looking Jesus walking around, with people swooning at the mere sight. But it’s not the case. Based on skeletal remains of first-century Jews, archaeologists have deduced that the average build of a male during the time of Jesus’ public ministry was five foot one, 110 pounds. I hate to break the news if you didn’t already realize it:

Jesus wasn’t pretty.1 Not in the worldly sense, that is, based on good looks.

Everything about His coming to earth was purposeful and specific, so this, too, must have been part of God’s sovereign plan.

Perhaps if He had been attractive, we would make this the reason He drew so many people to Him or use it to explain the dedication of His followers. Perhaps then we would have felt as if He had a leg up on us regular people, who have flaws, things we believe require a filter, and it would have distanced us from Him.

Jesus drew people in because He was real, and that is the real attractiveness. Our true appeal will always be our truth lived out.

To live a Jesus-over-everything life, we go to the core of why we follow Him to begin with: who He is, what He stood for, what drives His heart. While He walked this earth, He never tried to be anyone He wasn’t. He never changed His truth to fit in. The strategy of heaven in God coming to earth in the form of His Son was not to gain popularity but to save souls from themselves. The cross wasn’t pretty. It was brutal, humbling, and holy. It was real. What it does to change us, still today, is just as real.

We don’t need to make ourselves look any better or keep up with some standard of attractiveness the world sets. This is the cause of so much of our wounding. My fashion consultant speaker/friend Shari, calls these beauty wounds, and I can think of plenty of mine, self-inflicted and otherwise. Trying to be skinny all my life has about killed me. Wishing I had fuller lips and prettier legs is something on which I’ve spent too much mental energy. Comments made by high school boys that I’ve never forgotten — even another woman who was supposed to be my friend but made a point to let me know we couldn’t share clothes because she was smaller — these are marks that bore deep below the skin and stayed.

What we all need is to change our definition of what is truly worthy and attractive — being who we are and who we were meant to be, flaws and all. This evergreen message of identity is one we will always preach because humans will forever need it. But it’s time to grow out of our obsession with ourselves and pursue identity with God, who created us, who cannot contradict His very nature to be exactly who He is. Self-focus has broken us in our reluctance to lift our gaze.

Jesus may not have been physically beautiful, but there is none more beautiful we could ever know. In His example we find our own guidebook for the attractive life we seek.

For we do not have a High Priest who cannot sympathize with our weaknesses, but was in all points tempted as we are, yet without sin. — Hebrews 4:15 NKJV

Father, if it is Your will, take this cup away from Me; nevertheless not My will, but Yours, be done. — Luke 22:42 NKJV

And Jesus increased in wisdom and stature, and in favor with God and man. — Luke 2:52 NKJV

Let this mind be in you which was also in Christ Jesus, who, being in the form of God, did not consider it robbery to be equal with God, but made Himself of no reputation, taking the form of a bondservant, and coming in the likeness of men. And being found in appearance as a man, He humbled Himself and became obedient to the point of death, even the death of the cross. — Philippians 2:5-8 NKJV

For there is one God and one Mediator between God and men, the Man Christ Jesus, who gave Himself a ransom for all, to be testified in due time, for which I was appointed a preacher and an apostle — I am speaking the truth in Christ and not lying — a teacher of the Gentiles in faith and truth. — 1 Timothy 2:5-7 NKJV

Who, in the days of His flesh, when He had offered up prayers and supplications, with vehement cries and tears to Him who was able to save Him from death, and was heard because of His godly fear, though He was a Son, yet He learned obedience by the things which He suffered. — Hebrews 5:7-8 NKJV

This hope we have as an anchor of the soul, both sure and steadfast, and which enters the Presence behind the veil, where the forerunner has entered for us, even Jesus, having become High Priest forever according to the order of Melchizedek. — Hebrews 6:19–20 NKJV

Inasmuch then as the children have partaken of flesh and blood, He Himself likewise shared in the same, that through death He might destroy him who had the power of death, that is, the devil, and release those who through fear of death were all their lifetime subject to bondage. For indeed He does not give aid to angels, but He does give aid to the seed of Abraham. Therefore, in all things He had to be made like His brethren, that He might be a merciful and faithful High Priest in things pertaining to God, to make propitiation for the sins of the people. For in that He Himself has suffered, being tempted, He is able to aid those who are tempted. — Hebrews 2:14-17 NKJV

All of these beautiful, true things about Jesus are what make Him real. They are what make Him trustworthy and worth following. They are why Jesus deserves to be first in the priority order of things and why being real is so important for us, that we would follow in the footsteps of the greatest role model we will ever know. We won’t ever measure up to Jesus. But we are called to walk in His example. And that means choosing not to be pretty and dress ourselves up but to come real.

For to this you were called, because Christ also suffered for us, leaving us an example, that you should follow His steps:

“Who committed no sin, nor was deceit found in His mouth”; who, when He was reviled, did not revile in return; when He suffered, He did not threaten, but committed Himself to Him who judges righteously; who Himself bore our sins in His own body on the tree, that we, having died to sins, might live for righteousness—by whose stripes you were healed. — 1 Peter 2:21-24 NKJV

I wish someone had told me when I was a young woman that I could be real with the way I felt about my body and learn to love the size it was instead of trying so many damaging ways to keep it impossibly small.

I wish someone had told me I could be real about how hurt I was over church people gossiping about my family when my dad lost his church and was all over the news, instead of my developing a hard shell to make me tough so I didn’t have to feel things.

I wish someone had told me I could be the real, feisty me and that it was good, not bad or too much for people to handle because that’s what I believed all those years, despite my mother’s love and approval (thankful for a good one), constantly trying to stifle a personality God gave me. When I was growing up, the church I knew wasn’t as open as it is today to assertively gifted women.

Most of all I wish I had understood what scholar N. T. Wright said: “The authenticity that really matters is living in accordance with the genuine human being God is calling you to become.”2 I didn’t know how to be me because I misunderstood the process of becoming. Too often the unfinished us is blind to what the Spirit-shaped us can be over time. Lies have felt true, damning, and permanent. We aren’t weak for falling for them. We are human. But we need to put the truth of Jesus over them now.

I don’t want you to go on believing any untrue things, like I have, so let me say it to you:

real is the best pretty because it doesn’t ask you to lie.

Besides the fact that Jesus created us to be the real us, things get complicated when we try to live our life making it all look pretty; it’s exhausting and discouraging to the rest of us who need someone, like Luke, to be real — about how hard the cancer is — about how adoptions aren’t all roses even though we adore those babies, about how sometimes we don’t want to put a bow on the end of our doubt or lament.

It is hard as humans not to want to put our best faces forward, but it’s far harder to spend a lifetime (or any amount of time) in pursuit of being loved and wanted for how we appear. I have lived long enough to learn this the hard way: if the goal in life is to be liked and accepted by everyone, welcome to a life of exhaustion. There might be nothing more detrimental to a soul (think: a deadly over) than daily overanalyzing how we appear to others and overworking to control it. Choosing real over pretty is choosing to free our souls from the grip of an overfocus on self — something that is the root cause of most of our distresses.

It also frees us to do what God created us to do — be who He created us to be, and this is our number-one lifework. Chasing pretty — curating a life appealing to everyone else —  is at odds with why we are even here. I suspect this is why a lot of us stay wildly unfulfilled. We feel cornered into a contrived, half-baked, or even false persona we must keep up. What an exhausting way to live. It is the life of complication. Being real is a gift we give to others, yes, but it is also a gift we give ourselves. It releases us to be simple. We get to be who we are.

Excerpted with permission from Jesus Over Everything by Lisa Whittle, copyright Lisa Whittle.

The world shouts so loudly about physical beauty that it can be easy to hear Jesus’ whisper, “Be the gift of yourself.” Does this speak to you? God created us with intention! Come share your thoughts on being real over pretty on our blog. We want to hear from you! ~ Laurie McClure, Faith.Full