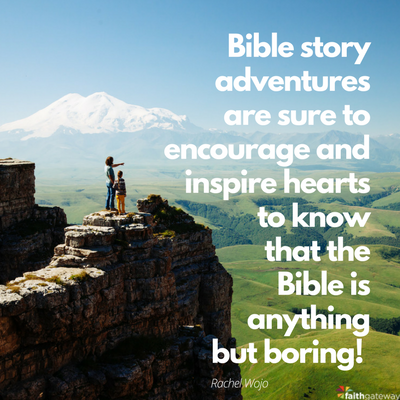 I’ll never forget the day my Sunday School teacher pulled back two large strips of red Jell-O by cellophane paper to allow my little fingers to walk through the “Red Sea.” She had a wonderful way of making it known to first graders that the Bible was anything but boring. Indeed, many stories included so much excitement and adventure that our little six-year-old imaginations were captivated!. If your young one has an especially adventurous spirit, you’ll want to check out these three Bible adventure stories in the new book, My Bible Adventure through God’s Word.

Everyone loves a good underdog story, right? But the Bible adventure story of David and Goliath goes beyond the best underdog story you’ve ever read. Imagine pre-teen David trying to stand up in Saul’s very large man’s armor! He most likely couldn’t even move the armor, much less take down the enemy while wearing it. Yet, he walked into the valley where the giant Goliath mocked God and His people, fully prepared to fight the battle. Assured that his shepherding experiences of fighting a lion and a bear were only a part of the unique training God had provided him, David addressed Goliath’s problem immediately.

You come to me with sword and spear, but I come to you in the name of the Lord.

David knew that God was bigger than any enemy he would ever face. With one simple, yet strategic move of the sling, David defeated Goliath while all the army of Israel looked on.  The battle truly was the Lord’s!

In a day when everyone was bowing to the king in place of God, three brave men chose to stand for the Lord. Although they were given more than one opportunity to escape punishment, they refused to blend in with the crowd and refused to worship anyone but the God of Heaven. The result was that they angered the king and disobeyed his laws. Therefore, they were subject to being thrown in the fiery furnace. The fierce courage of the three friends shines above the furnace, which was stoked to 7 times hotter than ever. The fire was so very hot that the men who threw in the three friends died during their assigned mission. The details of this Bible story adventure capture one’s attention and awe, as the king himself is confused about what takes place. “Didn’t I order three men to be thrown into the fire?” “Yes, sire.” “Then why do I see a fourth one who looks like the Son of God?!” Imagine Jesus standing right in the middle of the fire with the three Hebrews, protecting them and loving them right in their most courageous, self-sacrificing moment! Now that’s an adventure!

While giant-slaying and fire-walking sounds like loads of fun, understanding that bravery is also revealed through the simplest decisions is important for all children. In the New Testament, a little boy sets off on a bit of an adventure for a day. He had heard the Master Teacher would be passing close by and how he longed to hear Jesus teach. Seeing the spark of interest in his eye, his mama packed a wonderful lunch of five loaves and two small fish for him. Several times, throughout the morning as he walked, and then as he sat on the rocks, ears perched to hear every single word spoken, he could smell the wonderful lunch. While his stomach growled, he was waiting for the right moment to eat. Suddenly, he could hardly believe what his ears were hearing. Jesus was asking if anyone had any food. Oh, but all he had was barely enough for him. There were crowds and crowds of people. Surely Jesus didn’t really need the lunch his mother had so preciously prepared. But something in the boy’s soul knew that he should speak up. While his body felt small and insignificant, he knew he was supposed to give his lunch to Jesus. This boy’s fearless decision to surrender all he had, without regard to the size, provides us with a most glorious, adventurous miracle of the Bible. Jesus multiplied his small lunch thousands and thousands of times over. I wish I could have seen his face as he explained the leftovers he may have brought home to his mother which were greater than the original lunch she prepared! How cool would it be to watch his mother’s face as she stared in total amazement at her brave boy?

No matter your child’s individual interests, this wonderful collection of Bible story adventures is sure to encourage and inspire their hearts to know that the Bible is anything but boring! Check out 49 more Bible stories that your young one will grow to know and cherish in My Bible Adventure through God’s Word.

What adventure stories from the Bible do you most love sharing with your children?  We’d love to hear from you!