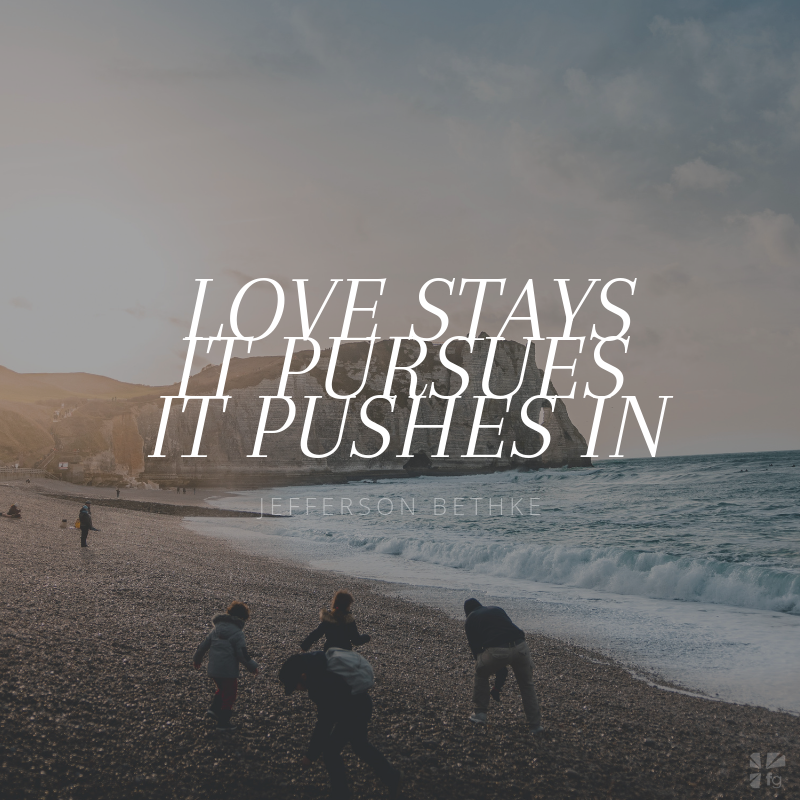 We are trained to make enemies. From birth it’s always “us versus them.”

Let’s be honest: sometimes Christians are the worst.

As if the world dying outside really cares.

Now, I’m not saying some of these clarifications and differences aren’t necessary. In the book of John, Jesus prays we would be “one.” (John 17:21) The only way to become one is to engage in healthy discussion on topics we disagree on. But we can’t honestly think any non-Christian will want to come into the family of God if we are just as — if not more — divisive than the rest of the world. Sometimes how we dialogue in today’s culture is just as important as why we dialogue.

Women? Gays? Muslims? Let’s make them our enemies. Yes, I know this doesn’t represent everyone. Yes, I know religion doesn’t do this all the time. But throughout history, it is clear that when it does happen, it can almost always be traced back to people who think their standing with God comes from their own righteousness. The minute you think you have gotten on God’s good side by your own behavior, you are naturally prone to demonize those who haven’t.

Religious people see “them” as the problem; Jesus-followers see “us” as the problem. When Jesus told the first disciples to love their enemies, (Matthew 5:44) He didn’t add, “as long as they look like you, talk like you, and act like you.” Loving an enemy means loving “them.”

I remember the moment this first hit home for me. I was having lunch with my mom. As we started to eat, I felt the tension.

I was a Christian now, and my mom was openly gay. Wasn’t I supposed to hate her? Wasn’t I told “not to associate” with her? Doesn’t she know homosexuals will not inherit the kingdom of God?

Instead I made a decision to listen. She was my mom. I listened as she poured out her thoughts, emotions, and feelings that had been pent up for years. I heard how she had been burned by certain religious communities — brutal stories of so-called Christians offering grace and redemption to all those around her, as long as the sin was socially acceptable. The sad part is, I couldn’t disagree. I’d seen the same thing.

For some reason the church had made homosexuality a varsity sin. Religious people are very particular and selective on this issue. They quote “Do not be deceived: neither the sexually immoral, nor idolaters, nor adulterers, nor men who practice homosexuality, nor thieves, nor the greedy, nor drunkards, nor revilers, nor swindlers will inherit the kingdom of God. And such were some of you. But you were washed, you were sanctified, you were justified in the name of the Lord Jesus Christ and by the Spirit of our God.” (1 Corinthians 6:9-11)

I don’t see homosexuality getting any prominence in this list, do you? In fact, the apostle Paul is attempting to broad stroke everyone, highlighting the fact that

none of us are good enough.

I don’t know about you, but I’m not scoring too well on this list. But how does that verse end? The Corinthians were undoubtedly filthy themselves and were not representing Christ well. Some of them were probably still engaging in these behaviors, which is why Paul was writing them the letter, but he still says, “But you were washed, you were sanctified, you were justified in the name of the Lord Jesus Christ and by the Spirit of our God.”

That is a scandalous statement!

If you are a Christian and are going to talk about 1 Corinthians 6:9–10, then you better include verse 11. It’s only when we understand that in Jesus we are cleansed, washed, and renewed that we see our sin fall by the wayside. We are greedy, filthy, idolatry-loving, glory-hungry thieves. And when we trust Jesus, He washes us. He redeems us — all of us.

And when we’re sitting across the table from someone whom we’ve been told to hate, the least we can do is listen and love her as Jesus loves us.

Regarding homosexuality specifically, I can’t begin to tell you the internal wrestling I’ve had with this issue. I have a personal stake in it. It’s part of one of the closest people to me. So if I can be honest, I’ve gone back and forth a ton on this issue. Is it okay? Is it wrong? Why or why not?

Everything in me wanted to be convinced it was okay. Everything in me looked for verses to see it sanctioned by God. But through years of wrestling, hours of Bible study, and tons of prayer, I didn’t come to that conclusion.

Because that’s what love is. It stays. It pursues. It pushes in.

In order for our society to continue to flourish, it is imperative that we learn how to have healthy, honoring, and engaging discussions on this issue. Everything outside of His creative order is a distortion, and when we follow that fractured path, we are implying we are our own gods and know better than He does. The issue isn’t primarily homosexuality, idolatry, drunkenness, greed, or right or wrong.

The issue is, are we going to trust that God knows best or that our thoughts, wills, and emotions know best?

The truth is we are all going to limp across the finish line to some degree. Of course there is victory in Jesus, and of course we are more than conquerors through Christ as the apostle Paul says; but even Paul had a thorn in the flesh. (Romans 8:37, 2 Corinthians 12:7)

The issue isn’t whether someone is good or bad, but whether he is repentant or unrepentant.

Who is God of her life? Who’s in control? What or who are they pursuing? Are they looking to Him or trusting in self? Because I trust that if Jesus’ grace has radically collided with a heart, I believe that person will begin to align themselves with Jesus’ image, looking more like Him every day.

But let’s also realize that we do have hope and victory and are called to take sin very seriously, doing anything and everything to run from it and to Jesus.

The writer of Hebrews makes it clear by saying we should “also lay aside every weight, and sin which clings so closely, and… run with endurance the race that is set before us, looking to Jesus, the founder and perfecter of our faith.” (Hebrews 12:1-2)

Even he admits there are things that weigh us down. Our sin sticks to us. But still… He says run with endurance. Keep our eyes on Him, and we will make it because it depends on Him, not us. But let us never get prideful. Let us never think this race is reserved for the elite, or the “good,” or the well qualified. It’s reserved for the lowly, the rejected, the marginalized.

One of my favorite stories in the Bible is the story of the woman at the well (John 4:1-24). She is the first person to whom Jesus reveals himself to be the Messiah. Jesus doesn’t choose to share this information first with a politician or a king or anyone of seeming importance, but with a Samaritan woman.

Samaritans were seen as half-breed Jews. They were looked down upon by the Jews. On top of this she was a woman, which in that culture meant she was a second-class citizen. Even worse, Jesus highlights her promiscuity. Jesus doesn’t condemn this woman, but rather graciously shows how He is the “living water” that can quench her insatiable thirst.

So Jesus, God himself, showed immense grace and gave great privilege to a half-breed, second-class, adulterous, and promiscuous woman. God is always a fan of going to the marginalized so His saving power isn’t credited to human wisdom but to His grace. Jesus completely shattered the social, gender, and economic paradigms. New Testament Christians were most known by their love for their neighbors, but today we are most known for our segregation of the lowly.

This issue really comes down to idolatry, which is the act of placing anything or anyone above Jesus as the ultimate source of worth, satisfaction, and identity.

The problem with idolatry, though, is that whatever you idolize, you then demonize the opposite.

Want to know what you probably idolize? Ask what you demonize.

But when you idolize Jesus, then you demonize demons — which makes a lot of sense to me. When Jesus and His righteousness are ultimate, then you actually see evil as the source of evil, rather than politics, money, or gender. Sure, you can disagree. Sure, you can have dialogue; but when something is your god, you’ll go to great lengths to defend it.

While I don’t agree with most of his viewpoints, Bill Maher said something that completely makes sense.

“New rule: If you’re a Christian who supports killing your enemies and torture, you have to come up with a new name for yourself…”

If we say we love Jesus, let’s start acting like followers. The world is waiting, and they can tell the difference.

Why is it so hard to love “them”? If idolatry is “the act of placing anything or anyone above Jesus as the ultimate source of worth, satisfaction, and identity”, ask yourself this question: Where do you find your worth, satisfaction, and identity? If you were truly to follow Jesus, what would be different in your life? Join the conversation on our blog! We would love to hear from you!