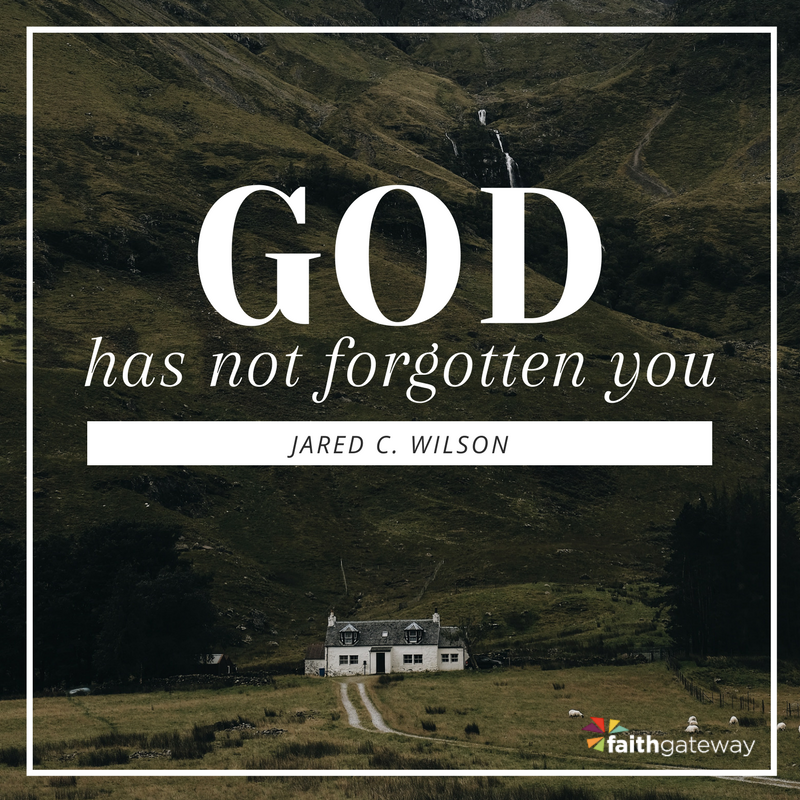 But God remembered Noah and all the beasts and all the livestock that were with him in the ark. And God made a wind blow over the earth, and the waters subsided. — Genesis 8:1

The chapter and verse numbers in the Scriptures are not inspired, of course, but there is something about Genesis 8:1 — specifically in the phrase “But God remembered Noah” — that makes a nice correlation to Romans 8:1. In all of the apparent chaos, in the torrent, the danger, the death and destruction, there is therefore now no condemnation for those whom God is pleased to remember.

But Noah was remembering God too. How could he not? All other supports were gone, literally wiped away and overwhelmed by the earth-consuming deluge from heaven. Noah and his family weren’t steering that boat, far as we know. And as big as it was, it was nevertheless compared to the sea-covered planet a mere speck in the vast expanse of the raging torrent, like a cork bobbing about in the Pacific Ocean.

When the storms are rising in your life, aren’t you closest to God then? Or do you fail to remember God even then and give in to despair and hopelessness and joylessness?

But we see in Genesis 8 that Noah remembered the God that remembered him. He remembered God primarily in 3 ways.

It took him probably 98 years or so to build the ark. All along he had to be trusting in God’s timing, no? The temptation had to have arrived within hour one — “Did God really say… ?” Certainly it did not abate hour after hour, day after day, year after year, decade after decade. But Noah walked each step with God, trusting in His timing. And after the thing was built, they went into the ark and were in there 7 days before the floods came! Those 7 days might’ve felt longer than 7 years.

As we pray and hope and struggle and fear, we have to remember that God’s timing is not our timing, that His timing is perfect. That when He says “No” to something or “Wait”, He has reasons based in his love for us, even if we don’t understand them.

The first deep acquaintance with grief came for my wife and I upon the miscarriage of our second baby. It was the Fourth of July weekend of 2002. We had both lost loved ones before then, but until then we had never been so personally affected.

I remember the first signs that something was wrong, causes enough to head to the doctor for answers. I remember most vividly sitting in a dim ultrasound room, while the technician ran the sonogram probe over my wife’s belly. The technician had an assistant with her, and they talked in very hush tones. They said nothing to us that I recall. They discussed what they were seeing. And what they weren’t seeing. They were keeping us in the dark until the doctor could speak to us, and that is exactly how we felt — like a darkness was overcoming us.

Of course, they finally told us the news. Miscarriage.

We named our baby Angel and we mourned for a long time. A year later we were pregnant again and due on — get this — July 4, 2003. The pregnancy had been difficult. Stress and other factors complicated our baby’s growth and caused Becky lots of discomfort and anxiety. After the miscarriage, we were pretty scared about how things might turn out, but our second daughter was carried all the way to term. I remember her birth, however, and while she came much more quickly than our first child, there was a complication. The doctor was concerned about her position, about the position of the umbilical cord. When our baby was delivered, she did not cry. The silence was unnerving.

I remember the nurse bringing our little baby over to the bassinet. The nurse looked concerned. I had been videotaping the event, but I put the camera down. I could tell something was wrong. Our baby was having trouble breathing. The more frantic the nurse looked, the more frightened I got. After multiple attempts to clear her throat and lungs, however, finally, climatically, our daughter let out the most beautiful wail I’ve ever heard.

We named her Grace. She was born on July 5th, one year plus one day from the day we first mourned Angel.

We don’t know why God decided to take Angel from us. And if we had our preference, we would have all 3 of our children here with us, alive and healthy. But God did a special thing with the timing for his own reasons, that we would come to trust Him more deeply, to be refined by His Spirit in our grief. See if we were writing the story, we would have had Grace born exactly a year later, on July 4. That due date seemed just perfect. But God said, “No. One year and one day.” And so we learn that Grace has her own timing.

And God’s grace has its own timing.

A curious thing here. Why did he send out a raven first, then a dove?

At the end of forty days Noah opened the window of the ark that he had made and sent forth a raven. It went to and fro until the waters were dried up from the earth. — Genesis 8:6-7

Kent Hughes writes, “Noah released the raven first because as an unclean bird it was expendable, since it was good for neither food nor sacrifice.” (We learn this in Leviticus 11:15 and Deuteronomy 14:15.) We learn a valuable lesson in Noah’s ordering of release of the birds for testing. The first thing he was willing to give up was something God considered unclean and unsuitable.

Is there not a valuable lesson for us in that? So often we protect things in our lives that God has actually called us to let go of. They may not even be things at all — our pride, our comfort, our schedules, our dreams — anything that gets in the way of trusting God and doing what He has called us to do.

Maybe you’re caught in a habit or in a relationship that you know doesn’t honor God, and it’s a huge area of compromise for you in your spiritual life. But you’re not willing to give it up. Why? Because you’ve come to treasure this habit or this pattern of behavior or this inappropriate relationship more than you treasure God. You’ve placed your priorities over God’s.

But Noah was ready to lose first what was lose-able in God’s eyes.

One thing Noah had to be trusting was that God wasn’t saving him and his family for some post-apocalyptic wasteland. Why would He preserve him and the animals simply to float around on the ark forever? If that’s what God called him to do, we have good reason to believe Noah would be willing to do that, but he was trusting God to have a plan for restoration. He trusted that as high as the waters got, as dangerous as they seemed, as angry as God was about the sin that provoked him to such subsuming wrath, in the end, God planned to bring him out unscathed, ready to resume the mandate given to His children to be fruitful and multiply.

God’s plan for His beloved is not annihilation but restoration.

Genesis 8:1, then, is a promise that as things get worse, God does not get further away, but actually more near. If He takes much away, it is only because He wants us to treasure Him only, and if we will treasure Him only, how will He not also in the end give us all things besides? (Romans 8:32)

Look to the Cross. It is the proof you need that God has remembered you and given you all that you need. His timing, His priorities, and His purposes are all revealed in Christ’s death and resurrection. He has not forgotten you. Remember that.

Are you in a storm right now? Are things you treasured being ripped away? God’s grace has its own timing. He has not abandoned you nor forgotten you. He has remembered you and He’s the God of restoration. Hold onto Him! Come share your thoughts with us on our blog. We want to hear your story! ~ Devotionals Daily