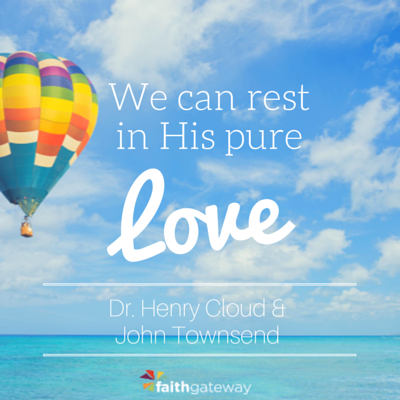 God expects His boundaries to be respected. When He makes choices, or says no to us, that is His right, His freedom. If we are to have a real relationship with Him, we need to respect that freedom.

When we try and put Him into binds where He “has to do something,” we are testing His freedom. When we are angry with Him for what He does not do, we are not allowing Him the freedom to be who He is.

We do the same thing with God. We feel entitled to God’s favor, as if He has to do what we want Him to.

How do you feel when someone asks you for a favor but does not give you a free choice? This childish entitlement gets many people dissatisfied with God the same way that they are dissatisfied with others in their lives. They hate the freedom of others.

God is free from us. When He does something for us, He does it out of choice. He is not “under compulsion” or guilt or manipulation. He does things, like dying for us, because He wants to.

We can rest in His pure love; He has no hidden resentment in what He does.

His freedom allows Him to love.

Many Bible characters ran into God’s freedom and learned to embrace it. Embracing His freedom and respecting His boundaries, they always deepened their relationship with God. Job had to come to accept the freedom of God to not rescue Him when he wanted. Job expressed his anger and dissatisfaction with God, and God rewarded His honesty. But Job did not “make God bad,” in his own mind. In all of his complaining, he did not end his relationship with God. He didn’t understand God, but he allowed God to be Himself and did not withdraw his love from Him, even when he was very angry with Him. This is a real relationship.

In the same way, Paul accepted the boundaries of God. When he planned trips that didn’t work out, Paul accepted the sovereignty of God. He asked God repeatedly for a certain kind of healing that God would not give him. God said, “No. I do not choose to love you in the way that you want right now. I choose to love you with My Presence.” Paul did not reject God for setting that boundary.

Jesus was perfected through His suffering (Hebrews 5:7-10). In the Garden of Gethsemane, He asked that His cup of suffering pass from Him, but God said no. Jesus accepted God’s wishes, submitted to them, and through that “became the source of eternal salvation for all who obey Him” (Hebrews 5:9). If Jesus had not respected God’s boundaries and God’s no, we would all be lost.

He does not want us to make Him the bad guy when He makes a choice. We do not like others trying to manipulate or control us with guilt, and neither does He.

Then again, God does not want us to be passive in our relationship with Him either. Sometimes, through dialogue, He changes His mind. We can influence Him because ours is a real relationship of the kind Abraham had with God (Genesis 18:16-33). God said that He would destroy Sodom, yet Abraham talked Him out of it if he could find ten righteous people.

When we make our feelings and wishes known, God responds. [tweet this]

We do not often think of God this way, but the Bible is clear. It is as though God says, “If it really means that much to you, it’s okay with Me.” One of the most astounding teachings of the Bible is that we can influence God. It wouldn’t be a real relationship if we couldn’t.

Like a real friend, or a real father, He says, “Let me hear your side of things and I will consider them. They matter to Me. Maybe you can convince Me to change My mind.”

Consider Jesus’ parables about prayer. In one story a judge who “neither feared God nor cared about men,” for some time refused to grant a widow her request for justice. But because the widow kept bothering him, he changed his mind and granted her wish (Luke 18:1-8). Jesus told them this parable so “that they should always pray and not give up” (Luke 18:1). In another story, a neighbor who persistently asks for bread is granted the request because of his continuing boldness (Luke 11:5-9). Other people Jesus decided to heal after they persisted in asking for healing.

God wants us to respect His boundaries; He doesn’t want us to withdraw our love when He says no. But He has nothing at all against our trying to persuade Him to change His mind. In fact, He asks for us to be tenacious. Often he says, “Wait,” seeing how much we really want something. Other times, it seems He changes his mind as a result of our relationship with Him. Either way, we respect His wishes and stay in relationship.

Excerpted with permission from Boundaries: When To Say Yes, How To Say No, To Take Control Of Your Life by Henry Cloud, John Townsend, copyright Zondervan.

Have you ever been mad at God or called God bad when He said no to something you really wanted or thought you needed? On the other hand, have you ever looked back at some of the things you asked for with incredible relief and gratitude that God said no? What about the truth that we can influence God’s decisions and even change His mind by talking with Him? Is that a surprise to you? Come join the conversation on our blog! We’d love to hear your comments on respecting God’s boundaries. ~ Devotionals Daily