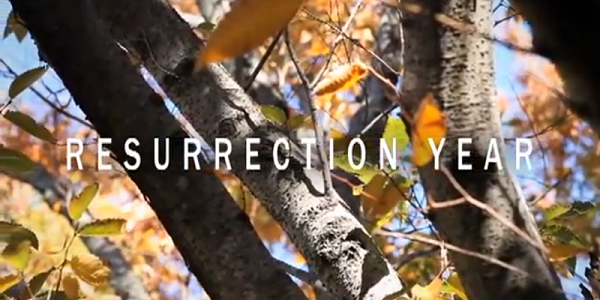 Expectation. Expectation. Expectation. Disappointment. After ten years of tear-soaked prayers, repeatedly dashed hopes, and multiple failed rounds of IVF, Sheridan Voysey and his wife come to a heart-breaking conclusion—their dream of having a child is over. Empty and confused from a decade of disappointment, they leave their jobs, pack their bags, and embark on a journey in search of restoration. Voysey chronicles their return to life in Resurrection Year. From the streets of Rome to the Basilicas of Paris, from the Alps of Switzerland to their new home in Oxford, they begin the healing process while wrestling with their doubts about God’s goodness. One part spiritual memoir and one part love story, Resurrection Year is an honest, heart-felt book about recovering from broken dreams and reconciling with a God who is sometimes silent but never absent.

The water is calm today in Five Dock Bay, its surface a shim­mering sheet of cellophane. Cotton-ball clouds dot the deep blue sky and seagulls swoop as children toss chips in the air. Merryn and I walk along The Esplanade, near the jetty just past Taplin Park—still in the wilderness, our final IVF days ahead of us.

‘There has to come a point,’ I say gently, ‘when we call an end to the journey.’

‘I know,’ Merryn says, resignedly. ‘I can’t keep doing this either.’

I breathe a prayer of thanks that we’re of one mind. Some couples try ten or twenty rounds of IVF in the frantic hope that the next attempt will succeed. Perhaps they have more emo­tional stamina than us.

‘I think this should be our last round,’ she says.

We turn onto Victoria Place and follow it to ‘the rock’—the nickname we’ve given our favorite spot on the peninsula. Look left from this cliff ledge and you look back on the Bay, with its bobbing sails and placid waters; look right and speed boats are racing up Parramatta River, leaving white foam trails stretching back to Sydney Harbour. Fishermen cast lines, kayakers paddle the shoreline and when the sun sets the sky turns red and the western vista becomes a silhouette.

We sit on the rock, watching the water-lovers frolic. ‘If this really is our last chance to have a baby and it doesn’t happen,’ Merryn says, ‘I need something else.’

I’ve been watching a ferry pull up to the Chiswick pier but now turn to her.

‘Our five years in Sydney have been all about having a fam­ily,’ she says. ‘If that doesn’t happen the thought of life going on as usual is just . . . it’s just too depressing. I have to have some­thing to look forward to—a consolation prize. Otherwise I feel like I have nothing.’

I slip my arm around her shoulders, ready to the rescue. ‘What would you like to do, love?’ I ask. ‘What would be a nice consolation prize for you?’

‘If we don’t have a baby next year, could we move to Europe?’

A wilderness experience is what our journey had been.

I’d drawn the imagery, of course, from that momentous bib­lical story where the Jews set out for the Promised Land after their liberation from slavery. What started as an adventure for them had soon become an ordeal, with an eleven-day trek becoming forty years of wandering.

But as I sit this morning surveying Abingdon Road, a coffee in my hand before another day of writing, I’m intrigued by this little phrase. The wilderness. I reach for the big book on my left with the well-worn pages, and read through the story again.

The wilderness, I find, reflecting on those scriptures, is a place of rich significance. At its best it is the place where we encounter God and discover his will for our lives—like the Jews as they saw God in a pillar of cloud and fire and heard his thundering commands on Mt Sinai. At its worst it is the place of unfaithfulness and judgment—where the people bowed to golden calves and walked in circles instead of forward. And between these two themes lie a variety of others that mirror our everyday experience.

A place of trial.

A place of doubt.

A place of restlessness.

I feel like I’ll always be condemned to being restless and dis­content, wanting to be somewhere else without knowing where that somewhere else is . . .

A place of provision.

A place of discovery.

I am a child of God whether applauded or forgotten . . .

A place of change.

The wilderness is a place of trial, of doubt, of restless dis­content; a place of provision, of discovery, of change. And as I rustle through those well-worn pages one more time, there is something else about the wilderness I find.

It is a place of transition.

Because the wilderness is the ground between what was and what will be—the place between slavery and freedom, between immaturity and wisdom, between God’s promise and its ful­fillment, between who we were and who we are to be. In the wilderness we become people we could never have become, before moving into the next phase of our lives.

After forty years in the wilderness, the Jews entered the Promised Land.

After forty days in the wilderness, Jesus launched his world-changing mission.

And this gives me hope as I look out over Abingdon Road.

After the wilderness comes a new beginning.