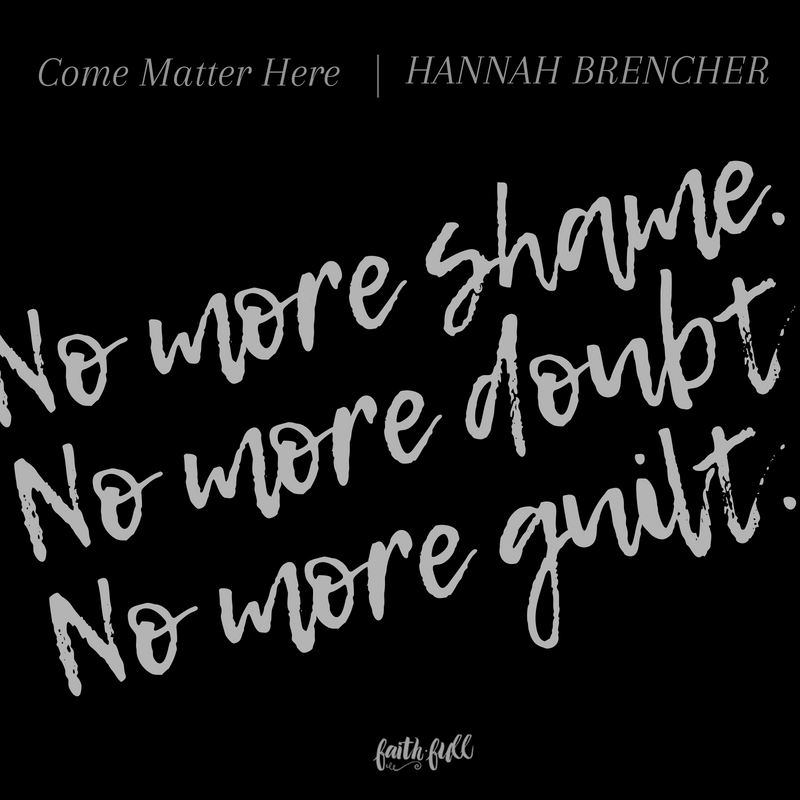 As I read [the Gospels of Matthew, Mark, Luke, and John repeatedly] that month, I kept thinking back to one of the most beautiful depictions of the Gospel ever given to me by my friend Caroline. It was a few years ago, before I lived in Georgia. She and I were sitting at a high-top table in a dive bar in Connecticut listening to obscure, unheard-of bands play. She was there to cheer on a friend, so she invited me to come along.

Caroline is no-nonsense. She’s an engineer, and I found a deeper level of faith when I met her because I thought to myself, This girl has no time for stuff that is silly or not real. I think sometimes people make faith seem so elementary and almost ridiculous that you wonder why you’re giving so much of your life to it. Then you meet someone like Caroline, who doesn’t mess around and really doesn’t have time to mess around, and she believes so adamantly that it makes you want to believe even more.

So Caroline was sitting there, wearing a sweatshirt with Minnie Mouse on the front, and nearly out of nowhere she just blurted out, “If the Gospel is what we say it is, then it can be summed up in three words: It is finished. That’s it. That’s all. Show is over. No more shame. No more doubt. No more guilt. If I believe that the Gospel is really Jesus finishing it all for us, then I am just called to dance in the aftermath of what He did.”

I think Caroline was right. The gospel is this astonishing story line where we were once people who had cause to be filled with fear, doubt, anxiety, and death. We were swimming in it, and it was brutal. And then this Man comes along and His name is Jesus. He walks differently; He doesn’t have those chains we put on ourselves. And then, in unforgettable fashion, He dies for us. He dies for the things we did wrong in the past and what we will surely mess up in the future.

And what’s really supposed to happen when you put your trust in Jesus is you’re supposed to live in the context of a different story.

You’re supposed to move out of the apartment where Fear and Doubt are your anxious landlords, and you are supposed to figure out how to live in this new place where Joy and Peace are your roommates.

We are supposed to let the fear and the doubt and the shame go. We are supposed to walk in a new way. We are supposed to be so thankful for this gift God gave us, this exchange, that all we can really do to express our gratitude is choose to dance in the aftermath of what Jesus did for us. I say “supposed to” because I think some of us could do a much better job focusing on that story line. I know a lot of people who believe in the story of Jesus but have more fear than people who don’t believe in anything at all. I want something different. I want a reason to dance.

It makes me think of the story I heard about how the movie Frozen came to be. In the original script, Elsa — the main character — was meant to be a villain. They say her character originally looked edgy, like Amy Winehouse. Two songwriters for the film — Kristen Anderson-Lopez and Robert Lopez — were spinning their wheels day after day, coming up with songs that kept ending up on the editing room floor. They were trying to create a catchy villain song, but the tune that stuck, the tune that surprised everyone in the room when they heard it for the first time, was the song “Let It Go” — the powerful ballad about letting go of fear and walking into a new life.

Codirector of the film Jennifer Lee said in the New York Times, “The minute we heard the song the first time, I knew that I had to rewrite the whole movie.”1 A song that was only meant to be a side thought on the soundtrack ended up informing and rescripting the whole plot so Elsa could become this troubled character who was redeemed by the love of her sister.

I’m willing to bet that none of the people sitting in the boardroom on the day the song “Let It Go” was played for the first time went home that night and listened to all the reject songs. There wasn’t a need to go back to the songs that weren’t as good. They had the hit. They had the story that changed the entire story.

I think the Gospels are the song that rewrites the whole story. If we believe the story of Jesus in those four books, if we take it for what it is and believe it’s the best story out there for us, then it’s meant to rewrite our whole entire story from start to finish. It’s meant to change us as characters, remake us into characters who are no longer crippled by fear and doubt but dancing in the aftermath of a bigger story.

I want to rest inside this. I want to know it’s true every single day of my life. I’d be lying if I didn’t say there are still days when I doubt or give fear too much breath. But there’s a simple prayer for that, one prayed by the father of a suffering boy, that I borrow often: God,

If I could add on to the father’s prayer in that moment, if he would just pass me the prayer microphone, I would say, “Help me to believe there is a better story out there than the one I try to live out on my own. I don’t want a story where fear is the focal point, the main character with the most lines. I want a story about love. I want a story where love saves and redeems and makes me whole. Help me invest in this story and believe it with all I’ve got so I can feel freedom, so I can feel like the story changes me and I’m better because of it.”

This isn’t a selfish prayer. It’s a real prayer. In his 1,027th sermon (because someone counted for the man), Charles Spurgeon said, “Never be content with hearing a sermon unless you can understand it, and if there is a truth that is above you, strain after it, strive to know it.”2 I think the worst thing we could possibly do is accept something just because someone told us to or because everyone else in the room is nodding their heads. We have to feel it in our bones. It must change us. We need to know it as our truth, and I think that only comes from digging deeper and asking all our questions.

Dear God, meet me. There are times when I cannot feel You, when all I can pray is, “God, help me with this unbelief.” As I sit with my Bible, amplify the pages and the stories within them. Reveal yourself to me in crazy ways when I walk outside today. Take these small hours I can offer You and help me climb to new levels in my faith.

It is finished. No more shame. No more condemnation. No more doubt. Jesus finished it for us. Today, we can “let it go”! That’s such good news, isn’t it? How about a dance? Come share your thoughts with us on our blog. We want to hear from you about dancing in the freedom He paid for! ~ Laurie McClure, Faith.Full