HE IS RISEN: Alive and Victorious!

“Which person, alive or dead, would you choose to talk with over coffee, and why?”

The question came from a group of ladies whose church conference I would be speaking at in a few months. They thought it would be fun to include some trivia in the program. The first couple of questions were easy. Chocolate or chips? Chocolate! Favorite animated movie? Finding Nemo. But I had to think about that third question for a bit, and I ended up settling on Mary Magdalene. She especially understood the power and reality of evil, and so her joy in Christ’s victory over sin, suffering, and death must have run deep. It would be an honor to see her example of faith, love, and worship up close.

The gospel writers tell us that Mary Magdalene was possessed by seven demons (Mark 16:9; Luke 8:2), and in Scripture the number seven denotes “completion.” Apparently this poor woman had been totally possessed by evil until the day she came face-to-Face with Jesus Christ and He set her free.

Then she watched her Lord and Savior suffer — battered and bleeding, carrying His cross up a hill where He would be brutally executed. She saw His lifeblood drip onto the very ground He had spoken into existence. After Christ had taken His last breath, Mary followed Nicodemus and Joseph as they carried Jesus’ body to a garden tomb. Early the next morning, when it was still dark, she went back to that tomb — and the stone had been rolled away. Mary ran to Peter and John and told them that Christ’s body was missing. The two men went and saw it for themselves: the tomb was empty! After Peter and John left, Mary looked inside the tomb a second time and saw two angels. They asked her, “Dear woman, why are you crying?” (John 20:13).

In light of all that had happened the previous two days — and really, throughout much of her life — that question might have seemed odd. Mary could have given a long list of reasons to be crying. And if Jesus’ body had still been there on that Easter Sunday morning, then we all would have a reason to cry.

Many people have studied the lives of great leaders, but only those of us whose allegiance is to Christ alone serve a risen, victorious Savior. He conquered sin and death, and we who name Him Savior and Lord will do the same. Like Mary, we now have reason to rejoice instead of cry. Whatever you are facing right now, remember the empty tomb: Jesus is alive, and because of that, we win in the end!

Our Lord is not in the tomb — He is alive!

Five Minutes in the Word 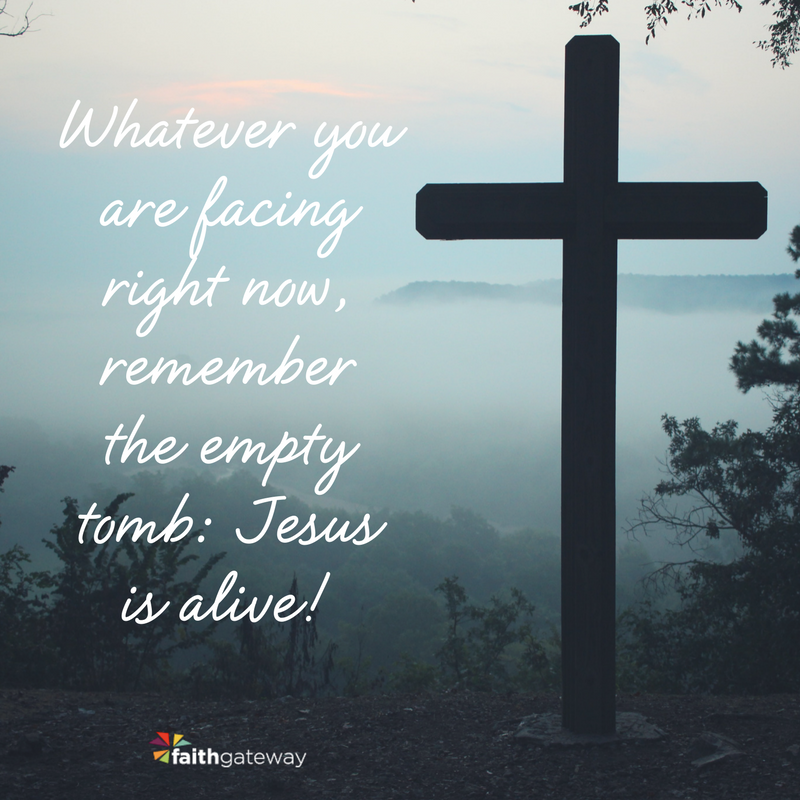 I have told you all this so that you may have peace in me. Here on earth you will have many trials and sorrows. But take heart, because I have overcome the world. — John 16:33

He isn’t here! He is risen from the dead, just as He said would happen. Come, see where His body was lying. — Matthew 28:6

During the forty days after He suffered and died, He appeared to the apostles from time to time, and He proved to them in many ways that He was actually alive. And He talked to them about the Kingdom of God. — Acts 1:3

Excerpted with permission from 5 Minutes with Jesus by Sheila Walsh, copyright Sheila Walsh.

HE IS RISEN! Happy Easter from all of us at Devotionals Daily! May your heart, mind, and soul be filled with the awe and joy of our risen Lord today! Come share your thoughts with us on our blog. We want to hear from you! ~ Devotionals Daily