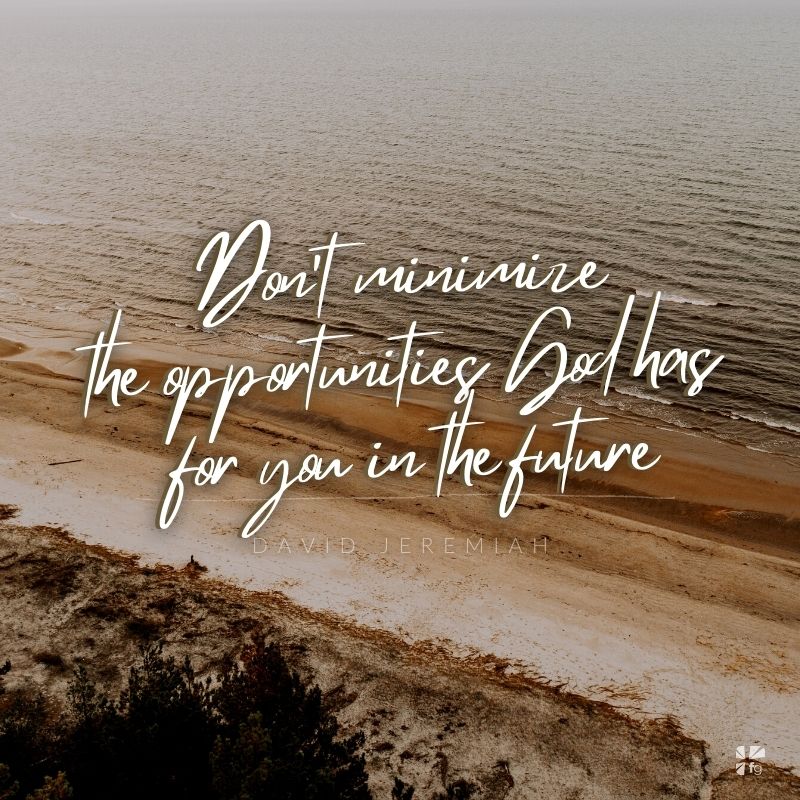 In the work God has given me through the years, I’ve had to make a lot of difficult decisions. Left to myself, I might have erred too often on the side of safety and security. But there’s a man in the Bible who inspires me to keep stepping out and taking risks with wholehearted confidence in the Lord. I’m convinced you’ll be able to go forward — unafraid to take risks — if you can embody his spirit.

That man is Caleb. Do you know him? Many people don’t know a great deal about Caleb because he only occupies thirty verses in the Bible. But what verses they are! What a man of faith! In this chapter, I want to show you how this Old Testament hero left a legacy of courage for you — a powerful example of risk-taking, future-grabbing grace.

In the book of Numbers, Moses sent twelve men — Joshua, Caleb, and ten others — as an advance party to reconnoiter the promised land. These men left the safety of their encampment, forded the Jordan River, and slipped into Canaan. Their mission: to make notes of the land, observe the enemy, study the fortifications, estimate the population, and bring back enough intelligence to aid Moses in planning the coming invasion of the land God had promised the Israelites. The Bible tells the story this way:

So they went up and explored the land from the wilderness of Zin… Going north, they passed through the Negev and arrived at Hebron, where Ahiman, Sheshai, and Talmai — all descendants of Anak — lived. — Numbers 13:21-22 NLT

The city of Hebron had been the ancestral home of Abraham, Isaac, and Jacob, but now it was inhabited by an evil tribe of huge warriors known as the descendants of Anak. The sight of these warriors terrified some of the spies.

The scouts quickly harvested some pomegranates and figs from the orchards of Canaan, and two of them lugged back an enormous cluster of grapes, carrying it on a pole between them. Imagine the excitement when the spies returned to Kadesh Barnea! Their mission had taken forty days, during which no one knew if they had survived or perished. Day after day, sentries at Israel’s parameters watched for them. Now they were back — all of them safe and sound.

But they were not united.

How to Live Life in the Safe Zone

In professional football, NFL coaches study the smallest statistic to find every possible advantage. But according to author John Tierney and research psychologist Roy F. Baumeister, many coaches make the same simple mistake week after week. It happens on fourth-down-and-short situations, when their team only needs a yard or two to keep possession of the ball. Nine times out of ten, instead of the riskier decision to try to win by going for another score, the coach settles for trying not to lose and sends in the kicker to punt the ball to the other team.

Statistics show that trying for the goal and the win is actually the better strategy. So why do coaches punt on fourth down? Tierney and Baumeister concluded there’s another factor involved. They call it “the power of bad.”

Back to the coach. He knows if he chooses the risky play and fails, and the other team goes on to score, the fans and press will be unforgiving. Sportscasters will denounce him as reckless and use phrases like loss of momentum and the turning point in the game. If his team loses by a narrow margin, that failed fourth-down attempt will be blamed for the loss and replayed endlessly afterward.

That image of potential failure is hard to overcome. So the coach plays it safe. The fear of failure has lost many a game.1

Have you ever heard these names: Shammua, Shaphat, Igal, Palti, Gaddiel, Gaddi, Ammiel, Sethur, Nahbi, and Geuel? No? These are the names of the ten spies who risked their lives on an espionage mission only to lose heart, doubt God’s power, and miss God’s will (Numbers  13:4-15). They came back so discouraged they disheartened the people of Israel.

Those men made three terrible mistakes. They fell into three traps you and I must avoid at all costs.

God wants you to go forward. He has adventures, challenges, victories, and meaningful tasks for you. As you look at the bridge to your future, are you looking at the ropes or at the holes? Jean Hanson wrote, “If you’re one of those people that are afraid to take calculated risks, worry about every little thing, and have a hard time making decisions in your life, it’s time to take a break and do a little work on yourself… I learned a long time ago that being timid and conservative will get you nowhere.”2

In Numbers 13, the ten spies magnified every threat. They looked at the “bridge” God had designed for the future, and all they saw were the holes. The Bible says,

But the men who had gone up with him said, “We are not able to go up against the people, for they are stronger than we.” And they gave the children of Israel a bad report of the land which they had spied out, saying, “The land through which we have gone as spies is a land that devours its inhabitants, and all the people whom we saw in it are men of great stature. There we saw the giants (the descendants of Anak came from the giants); and we were like grasshoppers in our own sight, and so we were in their sight.” — Numbers 13:31-33

Notice all the holes the ten unbelieving spies fixated on:

If you propose to move forward in life, especially if you aspire to leadership, you’ll have to learn what it means to take risks — to live by faith. Scripture says,

For God has not given us a spirit of fear and timidity, but of power, love, and self-discipline. — 2 Timothy 1:7 NLT

Whenever we compare ourselves to the opposition, instead of comparing the opposition to God, we can get into a state of fear. If that’s a pattern in your life, the first step forward is recognizing it.

When Jesus left Galilee to travel to Jerusalem near the end of His life,

His face was set for the journey to Jerusalem. — Luke 9:53

Jesus knew the Cross awaited, yet there was no looking back for our Lord, no comparing, and no fear. His way forward was clear and He faced it head on.

You must do the same. Recognize the risk and properly evaluate the opposition. Then, when you have an inkling of God’s will for your life, set your face toward it and go forward.

While the ten spies maximized the opposition, they also minimized the glorious opportunities that lay ahead of them. They only had a dim perception of what God had in store for them; they believed in their hearts that God was setting them up for destruction, and their unbelief was contagious.

You can read it for yourself in Numbers 14:

So all the congregation lifted up their voices and cried, and the people wept that night. And all the children of Israel complained against Moses and Aaron, and the whole congregation said to them, ‘If only we had died in the land of Egypt! Or if only we had died in this wilderness! Why has the Lord brought us to this land to fall by the sword, that our wives and children should become victims? Would it not be better for us to return to Egypt?’” — Numbers 14:1-3

Their perception of God would be laughable if it weren’t so tragic. After all the Lord had done for them! He delivered them from slavery! Parted the wide waters of the Red Sea! Accompanied them with cloud and fire! Gave them His Law! Provided food and drink in the wilderness! Promised to make them a great nation in a land flowing with milk and honey!

How could they so quickly forget?

More importantly, how can we? When we forget all the blessings God has provided for us in the past, we’re apt to minimize His ability to guide us in the future. We may even dread the future and where we think God is leading us. If so, we’re exactly where the devil wants us: in a place of avoiding risks and playing it safe. Oh, we of little faith.

What I’m telling you is this: don’t minimize the opportunities God has for you in the future. Don’t put all your efforts into avoiding loss or turn your face away from the future He has planned for you. Instead, go forward with confidence and courage to do the task He has set for you.

Fear can keep us trapped, hold us back, cause us to shrink down instead of step out in faith. Today, let’s pray for faith and boldness like Mr. Risk-Taker, Caleb! Remembering the great things God has done for us in the past will give us courage and strength to go for it! Come share your thoughts with us on our blog. We want to hear from you! ~ Devotionals Daily