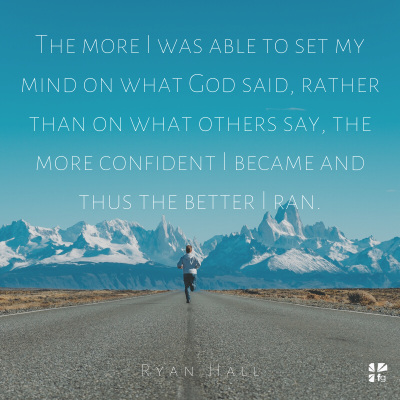 My getting into running in the late nineties happened to coincide with the genesis of the internet and online chatrooms. One day at a friend’s house, I entered an online chatroom for runners, expecting it to be fun and inspiring. I recall being surprised to see my name in a chat and being intrigued. But as I read some of the critical comments thrown around in anonymity, I no longer enjoyed reading them. The funny thing is that even though most of the comments were positive, it was those few negative words sprinkled in that stuck with me. In the weeks and months that followed, I thought about those negative remarks throughout the day, especially when I was doing a hard workout. I wanted to prove those commenters wrong, so I decided to use their comments as fuel for my fire. There was one problem, though. I never had my best workouts or races when I ran with someone’s negative words floating around in my head, which makes sense, because I firmly believe that whatever you focus on will increase. If I focused on negative comments in workouts, I usually tried too hard because I was trying to prove myself. And trying too hard caused me to tighten up. Nothing good happens in running, or in most sports, when you get tight. Tight muscles never outperform loose muscles simply because their range of motion is restricted, meaning they can’t move the full length for optimal power. Over my career, I had to learn to quiet the negative voices around me and focus on good things so I could run relaxed and fast.

Whatever we fix our minds on grows, which is why it’s so important to monitor our thoughts. Perhaps this is why Paul tells Christians,

I usually had my best races and workouts when I was just having fun, enjoying the sensation of running and the pain that comes with pushing myself, focused on living out my God-given mission. On those runs, I wasn’t focused on what others said I wasn’t capable of. I was focused on what God had shown me was possible for my life. The more I was able to set my mind on what God said, rather than on what others say, the more confident I became and thus the better I ran.

God’s words are only positive, hopeful, and truthful, so setting my mind and heart on them caused positivity and strength to flow through my running and my life.

God speaks to me and into my situations in different ways, but probably the way I lean on the most is reading His words in the Bible. I remember that in the nerve-wracking weeks prior to the 2003 NCAA Division 1 Cross-Country Championships — the most important race of the year for a collegiate runner, but the one I’d seemed unable to get right the previous two years — I was reading my Bible one morning and came across this passage:

Now, I understand that athletics is not the context of this passage, but what it conveys is that God can inhabit us with His Spirit for a powerful and profound purpose. It gave me the chills to think of God looking at me as someone He could use as a powerful tool to advance His Kingdom as in a battle. It felt to me like the Holy Spirit was imparting into the deepest part of my heart the identity that I could be useful. A few weeks later while I was running in the NCAA Championships race, I remember repeating those words to myself: “I am His war-club, His weapon of war.” I might not have been fighting an actual war that day, but there was a war inside my mind between the voice of the critics, saying, “You have run poorly at the NCAA Championships every year you’ve run,” and the voice of God, declaring, “You are My war-club.” Repeating the voice of God was the only way I knew to make the voice of the critics fade away. As a result, I had a breakthrough performance, leading most of the race and placing second at the national championships while leading my team to the title. That race is still one of the most precious memories of my career.

After I became aware of how the dwellings of my mind affected my performance, I stopped entering online chatrooms and reading internet message boards. I also stopped reading, listening to, or watching any media about myself. To this day, I still haven’t read any articles about me during my professional career. It’s not that I dislike the media attention or distrust the media. I see great value and influence in the media, and I find it intriguing and inspirational to read articles and listen to interviews about my favorite teams, athletes, and people. But I found that for my success, I had to prevent negativity and doubts from entering my mind so that I could be fueled by positivity and not hindered from performing at my highest level.

There may be a lot of critics out there, but my toughest critic has always been me. I too often beat myself up over bad races, missed opportunities, and poor choices. It took a lot of work to combat my own criticism and to extend grace to myself. Though I find it pretty easy to extend grace to others, I often struggle to forgive myself for my shortcomings. Once again, the key lies in looking at myself through God’s eyes. My pastor, Bill Johnson, often says, “I can’t afford to have a thought about myself that God doesn’t have about me.” God’s grace has covered my failures, and now He looks at me with unconditional love, a love that doesn’t have to be earned and can’t be lost. If God, who Himself is perfect, can extend grace to me, then certainly I should be able to extend grace to myself. Running free of the criticism of others is one thing, but I also have to run free of my criticism of myself.

I’ve come to realize that only one person’s opinion of me matters — God’s. Jesus states,

I see receiving glory as the place from which we get our validation. Glory is determined by our worth, our sense of how special, loved, and valuable we are. I don’t think Jesus is saying it’s wrong to receive compliments or words of affirmation from people other than God — I believe that God often encourages us through the words of others. Yet there’s a difference between receiving glory and receiving compliments and encouragement. By reading the words that were written about me in those chatrooms, I was inadvertently seeking glory from others. The glory of man is fickle and dependent on our performances, whereas the glory of God is rooted in His unshakable, undying, unrelenting love for us simply because He loves us for who we are, and that can never be shaken by our performances.

Even if I know that my glory comes from God, I still need to be careful whom I allow to speak into my life. Even if you can easily shake off a person’s negative comments, I would still argue that it is better not to surround yourself with such people or even to view their comments. The wrong people can so easily distract us from our God-given mission. Jesus was guarded in His interactions with others:

From that time Jesus began to show His disciples that He must go to Jerusalem, and suffer many things from the elders and chief priests and scribes, and be killed, and be raised up on the third day. Peter took Him aside and began to rebuke Him, saying, ‘God forbid it, Lord! This shall never happen to You.’ But He turned and said to Peter, ‘Get behind Me, Satan! You are a stumbling block to Me; for you are not setting your mind on God’s interests, but man’s’. — Matthew 16:21-23

Jesus was good at quickly identifying stumbling blocks that would trip Him up as He set out to accomplish God’s mission. Imagine that Jesus had been concerned with Peter’s rebuke and had even let it influence how He lived out His last days. Fortunately, He refused to allow others’ comments to derail Him or set Him back from fulfilling His mission. Like Jesus, we must be set on pleasing God and no one else. We can’t become distracted by the comments of others, but we must keep our focus on His words about us and giving Him the glory.

When I am running with this focus, I can have joy whether I’m having the best workout of my life or the worst one ever, whether I’m winning a race or just struggling to finish. When the cheering crowds and the critics fade away, I can feel the smile on His face as He watches me compete. And as a dad of four girls, I get this. It doesn’t matter what sport they’re playing or how well they’re doing, I just love to watch my girls compete. I love watching them go after maximizing their God-given potential. I can’t help but think that if I take such delight in watching my kids compete, how much more delight must God take in watching His children compete.

So let us focus on the delight of our Father as we walk securely and confidently, hopeful that we are bringing pleasure to the One who created us for that purpose.

Excerpted with permission from Run the Mile You’re In by Ryan Hall, copyright Ryan Hall.

Whether or not you’re running the New York City Marathon today, as a believer you are running a race… A race you’re meant to run with endurance (Hebrews 12:1-2)! You were created for a beautiful purpose! So keep your mind on what is positive, what God says about you, and run! Come share your thoughts with us on our blog. We want to hear from you! ~ Devotionals Daily