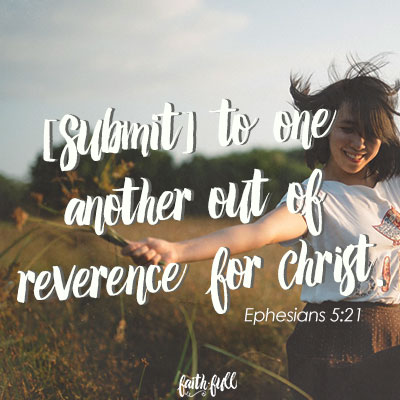 Editor’s note: Today’s post is technically geared towards husbands, but the topic is so important and this is a terrific launching place for great discussions this week. Share with us below what conversations this sparks!

Selflessness is the soul of teamwork. —Phil Jackson

My wife is better at a lot of things than I am.

Not every man wants a wife like mine. Steve, the dad of one of my high school friends, said he intentionally married beneath himself so he could do “what I darned well please.” His wife’s chief virtue was kindness, not confidence. She lacked the verbal skill to stand up to her husband, so he dominated her, just as he wanted to do. Steve couldn’t stand not being in control. At his job, he demanded that employees comply with his orders and carry them out exactly as he wanted. In his parenting, he berated his children with an angry cliché: “My way or the highway.” My friend often opted for the highway (also known as my couch).

Most of us immediately cringe when we think about that dad. There’s no gentleness, no tenderness. As Westerners living in the twenty-first century, we can easily recognize deficiencies in his character. A couple of millennia ago, those defects would not have been so apparent. Many of our contemporary assumptions about character are rooted in classical society. But, none of the ancient philosophers, such as Plato and Aristotle, spoke of humility and gentleness as marks of good character. Submission was not a virtue in the Greco-Roman world. A willingness to yield, to defer to another, was considered slave behavior.

The early Christians honored submission as a cultural value. You may have heard this famous line uttered from Jesus’ lips:

That was such a revolutionary idea that even the disciples who were with Him the most didn’t get it. The mom of two of them, James and John, asked Jesus if her sons could sit on either side of his throne. The other ten overheard the conversation and became indignant. Jesus ended their bickering not by softening His stance but by making it even more difficult to accept.

Jesus entirely reframed the rules of their competition. He exposed their conflict for what it was — pride. Jesus handpicked these guys. He gave more of His time and teaching to them than to others. Yet the thought of  others enjoying more access than they had made them livid.

And that’s really the root of pride: being offended at the mere thought of someone else having more power and control.

Few have articulated this idea better than C. S. Lewis, who wrote, “Pride gets no pleasure out of having something, only out of having more of it than the next [person].” You may think you’re proud of being successful, intelligent, or good-looking. But when you are surrounded by those who are equal or  better than you in these things, you lose all pleasure. “It is the comparison that makes you proud: the pleasure of being above the rest.”1 Pride lurks in the heart of every human being. But when this pride is given room to flex, it robs you of joy unless you’re stepping over everyone around you. You tolerate people as long as they bolster your self-esteem. As long as you get to be in the driver’s seat, everything is good. A husband like this has such a fragile ego that he demands service. A husband like this is riddled with insecurities. He doesn’t know how to walk side by side with another person. He doesn’t know how to let another person have the spotlight.

This brings me to another, more contemporary philosopher: Phil Jackson, the Zen master himself. My two favorite NBA basketball teams of all time are the Bulls and the Lakers. I don’t really follow either team now because I’ve turned into a fair-weather fan for both. But my fanaticism was based on the personalities on the teams, not the logos on the jerseys. I liked Jordan and Pippen for the Bulls and Shaq and Kobe for the Lakers. The Bulls won six championships, and the Lakers won three. Many credit the success to Phil Jackson’s coaching of both teams. Jackson might go down as the greatest coach of all time. He is to be credited for sure for the success, but listen to his thoughts on the subject:

The real reason the Bulls won six NBA championships in nine years is that we plugged into the power of oneness instead of the power of one man. Sure, we had Michael Jordan, and you have to credit his talent… It doesn’t matter how good individual players are — they can’t compete with a team that is awake and aware and trusts each other. People don’t understand that. Most of the time, everybody’s so concerned about not being disrespected… But when we lose our fear of that, and look to each other, then vulnerability turns into strength, and we can take responsibility for our place in the larger context of the team and embrace a vision in which the group imperative takes precedence over personal glory.2

It could be argued that the reason for the success of these teams was submission. It is pretty clear that a lack of submission between Kobe and Shaq short-circuited the Lakers’ championship run.

One of the most painful verses in the Bible, which is located in a discussion about marriage, is Ephesians 5:21:

[Submit] to one another out of reverence for Christ.

It is one thing to know that you are to submit; it is quite another thing to know how and when to submit. But listen to Coach Jackson on its benefits:

When a player surrenders his self-interest for the greater good, his fullest gifts as an athlete are manifested. He’s not trying to force a shot, or do something that’s not in his repertoire of basketball moves, or impose his personality on the team. It’s funny—by playing within his natural abilities, he activates a higher potential beyond his abilities, a higher potential for the team. It changes things for everybody.3

The Heart of Submission

Just as proper submission on a team leads to victory, so submission in marriage leads to success. Marriage is not a competition or a battle to be won by one side or the other. It is a complex partnership in which both spouses are respected, loved, honored, and given space to grow and flourish.

Marriage is a place where we want our spouses to win more than we want it for ourselves.

It’s a place where we learn to enjoy our spouses’ successes as much as our own and grieve their failures with compassion and empathy.

You and Your Wife Are Equal Before God

One of the beautiful truths in the Bible is that men and women are of equal value before God. This principle was a slap in the face to the chauvinistic, patriarchal cultures in which both the Old and the New Testaments were written. Simply put, men and women have equal dignity before God.

You and Your Wife Have Differing Roles

Spouses should submit to each other’s strengths. Your wife does some things better than you do. Maybe she is better at handling a crisis, planning events, or comforting a kid who has a scrape on his knee. Where she is strong, submit to her and follow. Where you are strong or have spiritual responsibility, lead.4

Spouses Should Submit to Each Other Regularly

I am a cheapskate. I inherited this from my parents. My favorite saying in this realm is that “if it’s free, it’s for me.” Last year Amie came home with the exciting news that our oldest child needed braces. The situation grew more exciting when she told me the braces would cost five grand. I immediately activated my inner bargain hunter. I found a friend of a friend who was an orthodontist and read my blog and listened to my sermons. I called the good doctor and asked if five grand seemed excessive. To my dismay, she said no. But later, she e-mailed me and offered to pay for everything regarding our daughter’s braces as a token of her gratefulness for my ministry to her. The only catch was that we had to travel forty-five minutes away for the appointments. I declared the good news to my wife: “We are going to save five grand, and our daughter will have movie-star-quality teeth!” To my surprise, she started to cry. She explained that she had done the research and chosen an orthodontist (not the free one) based on her schedule, as well as convenience and proximity. My argument was money; hers was family. I realized that my wife is usually right when it comes to family. When I submit to her regularly in this area, we win. In this case, free was not for us. We are five grand lighter, but our family health was worth the investment.

When Should I Submit to My Wife?

There are no hard and fast rules about when this should happen, but here are some guiding principles:

I tend to be a visionary, big-picture person, while Amie is more in tune with details and logistics. I often have great ideas, but Amie helps me stay in tune with reality and the potential cost of the ideas. Because of this, I regularly submit to her about whether an idea is workable. On the other hand, because Amie greatly respects my ability to see farther ahead and from a broader perspective than she naturally does, she regularly submits to my encouragement to take risks and consider things that feel too far away or too big. Neither of us is right all the time, but we’d be foolish not to lean into each other’s strengths in these areas.

Excerpted with permission from The Dude’s Guide to Marriage: Ten Skills Every Husband Must Develop To Love His Wife Well by Darrin Patrick & Amie Patrick, copyright Darrin and Amie Patrick.

Girlfriends, submission can be a touchy subject, right? If you’re married and possibly struggling with this topic, perhaps this can jumpstart your conversation with your husband. If you’re not married, talk this through with your small group or Bible study and research what God’s Word says about mutual submission. Join the conversation on our blog! We’d love to hear your thoughts about submission to one another! ~ Laurie McClure, Faith.Full