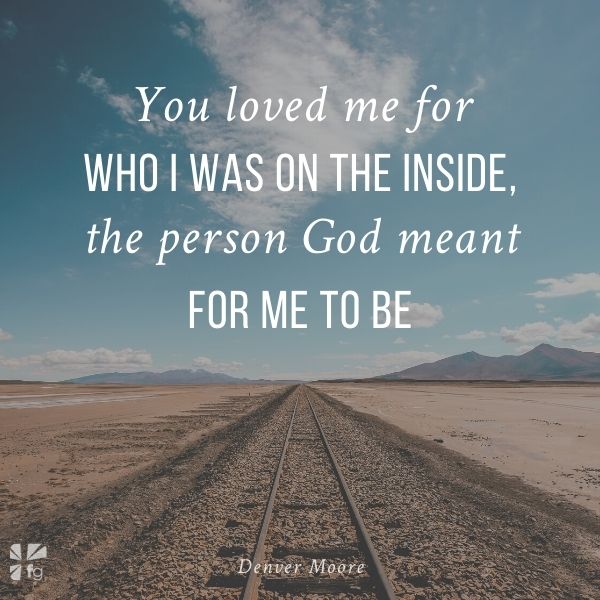 Editor’s note: Now a major motion picture, Same Kind of Different As Me is the remarkable true story of Denver Moore — a modern-day slave, Ron Hall — an international art dealer, and Ron’s wife Debbie — the unlikely woman who bound them together. In the bestselling book, Ron and Denver each give their own unique perspectives about their unforgettable journey. Today’s selection is from Denver’s point of view. Though he passed away in 2012, Denver’s legacy remains through his story of hope, redemption, and friendship. As he was quick to tell everyone, he was just “a nobody trying to tell everybody about somebody that can save everybody.”

I worked them fields for nearly thirty years, like a slave, even though slavery had supposably ended when my grandma was just a girl. I had a shack I didn’t own, two pairs a’ overalls I got on credit, a hog, and a outhouse. I worked them fields, plantin and plowin and pickin and givin all the cotton to the Man that owned the land, all without no paycheck. I didn’t even know what a paycheck was.

It might be hard for you to imagine, but I worked like that while the seasons rolled by from the time I was a little bitty boy, all the way past the time that president named Kennedy got shot dead in Dallas.

All them years, there was a freight train that used to roll through Red River Parish on some tracks right out there by Highway 1. Ever day, I’d hear it whistle and moan, and I used to imagine it callin out about the places it could take me… like New York City or Detroit, where I heard a colored man could get paid, or California, where I heard nearly everbody that breathed was stackin up paper money like flapjacks. One day, I just got tired a’ bein poor. So I walked out to Highway 1, waited for that train to slow down some, and jumped on it. I didn’t get off till the doors opened up again, which happened to be in Fort Worth, Texas. Now when a black man who can’t read, can’t write, can’t figger, and don’t know how to work nothin but cotton comes to the big city, he don’t have too many of what white folks call “career opportunities.” That’s how come I wound up sleepin on the streets.

I ain’t gon’ sugarcoat it: The streets’ll turn a man nasty. And I had been nasty, homeless, in scrapes with the law, in Angola prison, and homeless again for a lotta years by the time I met Miss Debbie. I want to tell you this about her: She was the skinniest, nosiest, pushiest woman I had ever met, black or white.

She was so pushy, I couldn’t keep her from finding out my name was Denver. She investigated till she found it out on her own. For a long time, I tried to stay completely outta her way. But after a while, Miss Debbie got me to talkin ’bout things I don’t like to talk about and tellin things I ain’t never told nobody.

“Denver, God has a calling on your life,” she’d say.

I told her several times not to be messin with me ’cause I was a mean man.

“You are not a mean man, and I don’t ever want to hear you say that!” she’d say.

She was gettin kinda smart with me. Ain’t never been no woman done that before, and few men, either, without them gettin hurt. But she kept on attackin me until I thought to myself, What’d I ever do to this woman that she won’t leave me alone so I can go on about my business?

But no matter how mean and bad I tried to act at the mission, I couldn’t shake that woman loose. She was the first person I’d met in a long time that wadn’t scared of me. Seemed like to me she had spiritual eyes: She could see right through my skin to who I was on the inside.

It wadn’tlong ’fore Miss Debbie and Miss Mary Ellen started askin me would I sing in their chapel service. I would, if they was smart enough to catch me. I’d sing some spirituals I brung with me in my heart from the plantation. Other times, I’d sing some songs I made up on my own. Like I said, I know plenty a’ Scripture.

It didn’t take long, though, ’fore Miss Debbie started gettin bossy again. She got a burr under her saddle ’bout somethin she called a “retreat.” Said her and a bunch of her Christian friends was goin up to the woods to “hear from the Lord.”

“I’ve been praying about it, Denver,” she’d say whenever she seen me, “and I believe God’s telling me that you should go with us.”

It was Miss Mary Ellen that told me about Miss Debbie. She come down to the mission alone to lead that Bible study Sister Bettie let em have, and when I seen Miss Debbie wadn’t with her, I asked her where was she at.

Miss Mary Ellen put her hand on my shoulder. “I have some bad news, Denver. Miss Debbie went to the doctor and… it’s serious. She has cancer.”

When Miss Mary Ellen said “cancer,” I couldn’t hardly believe it. Didn’t look like a thing in the world was wrong with Miss Debbie. Here she was, comin down to the mission two or three times ever week, feedin down at the Lot, leadin a Bible study. Seemed so perfect in her health.

The first thing I knowed was that God was gon’ heal Miss Debbie. The second thing I knowed was that I was afraid. What if He didn’t heal her? In my life, I had already lost most a’ the people that was important to me — Big Mama and Uncle James and Aunt Etha. Miss Debbie was the first person that had loved me unconditionally in over thirty years. Here I’d let her get close and, sure ’nough, looked like maybe God was gettin ready to take her, too.

I got scared my life was gon’ be changed forever. Then I started worryin how was everbody else at the mission gon’ take it when they heard?

I ain’t gon’ sugarcoat it: They took it purty hard. There’s a lot of folks come down to the mission and volunteer, but most of em was not faithful like Miss Debbie. But that wadn’t all. It was the way she treated the homeless that made them accept her as their friend. She never asked em no questions, like how come you is in here? Where you been? How many times you been in jail? How come you done all them bad things in your life? She just loved em, no strings attached.

It didn’t make no sense to me. But after a while, God explained it. A lotta times, I’d see a shootin star burn across the black sky, bright one minute and gone the next. Ever time I seen one, seemed like it was gon’ fall all the way to the ground, and I couldn’t understand why I never could see where it went. After I seen a lot of em act that way, I felt like God was givin me a message ’bout Miss Debbie.

The Word says God put ever star in the heavens and even give ever one of em a name. If one of em was gon’ fall out the sky, that was up to Him, too. Maybe we can’t see where it’s gon’ wind up, but He can. That’s when I knew that even though it didn’t make no sense to me, God had put Miss Debbie in my life like a bright star, and God knew where she was gon’ wind up. And I found out that sometimes we just have to accept the things we don’t understand.

Excerpted with permission from Same Kind of Different As Me by Ron Hall and Denver Moore, copyright Ron Hall.

How does Denver’s story resonate with you? We’d love to hear your thoughts in the comments!

Read the rest of the story: