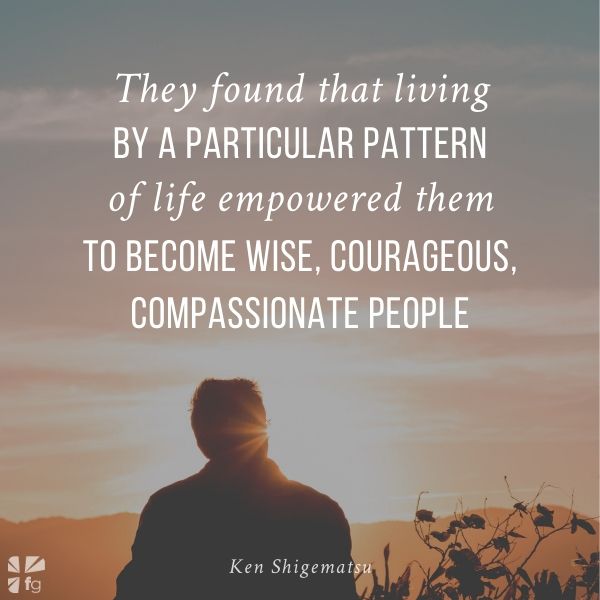 Editor’s note: The moment we live in presents us with many difficulties, but this time also offers an opportunity to revisit the rhythms of our life and the practice of our faith. In his books God in My Everything and Survival Guide for the Soul, pastor Ken Shigematsu demonstrates how the gospel can redeem our desires and reorder our lives, often with the aide of ancient practices we’ve set aside in our modern times. We can often move forward by looking back, and we can create a better rhythm and “rule of life” with which to grow deeper in our faith. Enjoy today’s excerpt from Ken’s book God in My Everything.

Several years ago my mentor, Leighton Ford, a seasoned Presbyterian minister, wrote to me and said he was organizing a ten-day pilgrimage to Ireland. The trip was originally for friends of his who were in their retirement years, but he hadn’t been able to fill the tour quota for the travel agency so now he was inviting some of his younger friends.

I had never been to Ireland.

I had never been on a pilgrimage.

Thanks to an unexpected cash gift from my grandmother at just that time (she had offered to buy me a La-Z-Boy style recliner!), I was able to afford the trip.

We arrived in Dublin and rode a bus about an hour to the village of Glendalough, in a lush green valley with two lakes. We got off our bus, crossed a small bridge, and suddenly found ourselves transported back fifteen hundred years. We wandered in hushed silence among ancient stone homes and churches, a stone high tower, and a cathedral, awed at the solemn beauty.

Glendalough was a monastic community that had been formed in the sixth century by Saint Kevin, a young man of royal descent who had originally come to the village to seek God in the solitude of a nearby cave. We hiked around one of the lakes to visit his first dwelling place — a hole about four feet wide and seven feet deep in the rock wall of a cliff. Our guide, an Irish rector, told us that in the winter months Kevin would stand and pray for hours in the icy waters of the lake with his arms stretched toward heaven. According to local legend, Kevin was once praying in the lake when a blackbird landed in the palm of his hand and laid several eggs. Bizarre as all of this may sound, I found my heart strangely moved by Kevin’s earnest devotion to God.

After spending a long time in prayer, Kevin sensed God leading him to return to society to spread the good news about Jesus. He began by teaching a single family about the way of God, but this group soon grew to include dozens of families. Seeing the need for a central place from which to teach, Kevin established a monastery at Glendalough.

Over time, other monks joined Kevin, regularly gathering to pray and chant the Psalms at appointed hours and teaching anyone who came to visit them. Local farmers pitched in to build the stone houses and the cathedral we had seen. Pilgrims came from all over Ireland and Europe to learn from the monks and pray with them. As I was listening to our guide share the stories about Saint Kevin and the Glendalough community, I wanted to slip off my shoes — I felt like I was walking on hallowed ground.

During our pilgrimage, we tried to follow the example of these early monks. We took time to pause each morning and evening to pray the daily office (set times for reading liturgical prayers). We read Scripture, spent time in silence, and learned ancient Celtic prayers. We listened to stories and legends about saints from another time, including Saint Patrick and Bridget of Kildare.

Contrary to the popular assumptions about monks and nuns, Celtic monastics did not withdraw from society to spend time alone, isolated from the world. Instead, they built their monasteries close to settlements, on well-known hilltops, or on islands near established sea-lanes so they could practically demonstrate the hospitality of Christ.1 The Celtic monasteries were not just places of prayer and worship; they also served as hotels, emergency shelters, hospitals, libraries, universities, centers for the arts, and mission-sending bases. These spiritual pilgrims were not just concerned with their own spiritual growth; they were a force for justice and community transformation.2

I came away from my time in Ireland with a new respect for monks and their monasteries. Like many, I had assumed that those who made prayer the primary occupation of their life did little practical good for society. I left Ireland with a new sense that it was possible to be both deeply prayerful and powerfully engaged in making the world a better place.

Though I didn’t recognize it then, my time in Ireland would eventually lead to a second “conversion” for me, a journey of growing to appreciate the beauty of the monastic way of life.

But my conversion to the monastic way didn’t mean I adopted all of the particular habits of that ancient path. I didn’t start wearing a hooded white robe, nor did I start eating in silence. I lived in a city, would soon be married, and with a church ministry and the ever-growing demands of life, I knew I couldn’t just leave my life behind — and God was not calling me to do that.

Instead, I began to ask the question that underlies this book: “Is it possible to follow the monastic way, enjoying God in every area of my life, while immersed in the busy routines of modern life?”

Maybe that’s a question you have as well.

Sometimes people ask me, “Why would an Asian person be interested in a monastic path?” After all, the monastic Christian tradition has its roots in places like Ireland, France, and Italy — not Japan. But there are some interesting parallels I have found between my personal history and the call of monastic life.

Several years ago, I asked our church staff to do some research on their family tree. We did this as a way to better know ourselves and our other team members. While exploring my roots, I discovered something surprising — my own ancestors were Japanese Samurai, warriors who sprang to the defense of their community when their people needed protection. Though most people are familiar with the traditional image of a Samurai as a highly disciplined warrior able to wield a sword with breathtaking dexterity and speed, I also learned that the Samurai were farmers, philosophers, poets, and artists. They lived by a code of honor called bushido, a set of rules and practices that guided their life and enabled them to grow into people of wisdom, fortitude, loyalty, compassion, and service. They centered on one purpose: serving their Samurai lord and the community. Their lives were often demanding, brutish, and hard. But much like the ancient Christian monastics, they found that living by a particular pattern of life empowered them to become wise, courageous, compassionate people who served their lord and the common good.

I found myself longing for something similar — a pattern of life that would help me live well, grow, and faithfully serve my Lord, Jesus Christ, and the larger community. As I learned more about the Samurai code of bushido and the monastic “rule of life,” I saw that both of these ancient cultures had developed something simple, yet profound: a life patterned on proven practices that helped them cultivate their character and contribute to the world.

I don’t live in a monastery. Nor am I a Samurai swordsman. I’m just an ordinary guy — a businessman turned pastor who struggles with the same challenges we all face. I am a father and a husband. I am a follower of Jesus. And I understand the challenge of integrating all of these callings into a simple way of life, balancing the various demands I face with wisdom and grace.

But I have found a way to live out my commitment to Christ in each of my different relationships and roles through a life-giving rhythm, what the ancient monks referred to as a rule of life. A rule of life is simply a rhythm of practices that empowers us to live well and grow more like Jesus by helping us experience God in everything. Though the word rule may sound harsh and confining, I have found that living by a “rule” has paradoxically freed me to pursue the life I have always longed for — a life of deeper, transforming friendship with Jesus and fruitful contribution to the world.

How can you begin to create a better “rule of life” in this moment in time? We’d love to hear your thoughts in the comments!