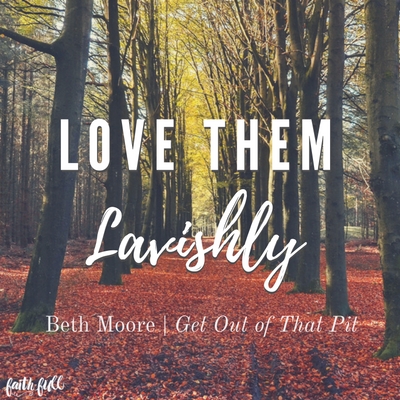 Pileups happen. Especially in families. That’s what happened to mine. That’s what happened to Keith’s. That’s the nature of family. The ties are so close that the same cord that hangs one tangles all. They say alcoholism is a family disease, but it’s not the only one. Both of my girls experienced some second-hand effects from my childhood victimization — Amanda battled outright fears, Melissa battled inward trust. And Heaven knows my husband was affected just as I was by his family’s losses.

Families pile up, but no matter who is at the bottom of it, no one is a lost cause. No one is too heavy to be pulled out.

God delivers with “a mighty hand and an outstretched arm” (Deuteronomy 5:15). But He does it one person at a time. Remember, what He’s after is relationship. What He wants takes place one on one. Nobody gets delivered on somebody else’s coattail. Nobody gets out hanging onto somebody else’s ankle. Jesus pulls each willing party out of the pit, one person at a time. And with His own scarred hand, by the way, just in case you think He doesn’t get our pain.

If you’re the first one who escapes a family pileup, you’d think your fellow pit-dwellers would be happy that at least you got out. You’d think your deliverance would give them hopes of their own, but for some reason that’s often not the way it works. Usually when you get out of the pit, somebody in the family feels betrayed that you felt a change was necessary. They think it means you’re saying something is wrong with the rest of them. Sometimes when a person decides to have a mind made up toward God and feet firmly set upon a rock, loyalty to Him is misinterpreted as disloyalty toward family.

Actually, nothing has the potential for greater positive impact in a close-knit group of people than when one decides to break tradition and pursue another level of wholeness. I am convinced that health can be even more contagious than infirmity. Until the breakthrough comes, however, and the Jesus-virus catches, you better glue your feet to that rock. The pressure to resume your old rank can be titanic.

When my beloved mother went home to be with the Lord, she was out of sorts with me. Had been for several years. I don’t mean we lost touch. We never went a day without talk- ing and hardly went a week without getting together. I never missed a single one of her cancer treatments, and she rarely missed a single one of my local speaking engagements. She had always been one of my favorite people in the whole world, and I’d spent much of my life trying to please her. Sadly, sometimes to the detriment of my marriage.

The conflict that emerged between us was not outright, but it was so strong that the undercurrent nearly swept me under. It was cold war. The Antarctic kind. I tried to talk to her about it, but she wouldn’t admit that we had something between us. The rupture began when I wrote Breaking Free. The book was too serious for her. “Depressing,” she said. I “used to be funnier.”

I begged her to understand. Appealed to her sense of compassion. “Mom, people are hurting so badly. They don’t need another motivational speech. They need freedom from countless abuses and addictions. They’ve been through all sorts of sufferings. They need to see the power of God’s Word at work in a real, live fallible person. They need people like us to fess up to our pain.”

Nope, she thought they just needed to get on with it like she did after some bad stuff happened to her in childhood.

I love my family of origin. I never wanted to do anything but honor them. I never wrote an ill word about them, but my mom felt strongly that my admission to having been abused by a person close to the family and turning out decidedly dysfunctional reflected negatively upon the entire family. God knows I was so crazy about my quirky and witty mom that it nearly broke my heart to lose her blessing. All my brothers and sisters and I courted her favor shamelessly. As her grave marker states, she was our “Queen of Everything,” and in her mind, this little princess had messed up royally.

Lest you misunderstand, not for one second did I lose her love. I always knew that she loved me. She just tried to quit showing it as much, and she quit saying it entirely. If she meant to inflict some punishment, she certainly succeeded. As her cancer progressed, I knew the time was short, and I became sick of heart with the need to hear her say that she loved me. No matter how I tried to set up opportunities for her to tell me (e.g., something subtle like “I love you, Mom,” with the kind of inflection that asked if she loved me too), she refrained. I could still cry over it.

One time I told her I wished I could trade places with her for a little while and take on her suffering. She looked back at me and responded, “Me too.” I felt like I’d been hit squarely between the eyes with a stun gun. It’s not that I didn’t mean what I said. I did. What hurt me was the natural fact that a parent would carry almost any burden to keep it off her child. I wanted to yell, “I’m your baby! Remember me?” In reflection, I know that her poor body was so ill, so horrifically carved, and her mind so weary that she was not entirely responsible for some of the things she said… or didn’t say. God may likely let me be in a similar position one of these days, and we’ll see just how sweet and affirming I feel like being.

I’m still crazy about my mother and have in my head an endless streaming video playing good times with her. No one made me laugh more. No one made me love my children more. I am confident that in her present and perfected state, she has forgiven my oversharing with you just as I must forgive her undersharing with me. In eternity our tongues will be loosed to say all the things we need to say. And perhaps I need to say more than she. You see, she may have said it all just before she died.

In my mom’s last lucid hour God did something so tender and sweet for me. Maybe even a tad humorous. My mom looked at me with great urgency in her eyes and kept passionately saying something. By that time, however, we could no longer make out her words. Immediately I took it upon myself to assume she was trying to make peace with me. “Mom,” I gushed with great emotion,“If you’re trying to tell me you love me, I know that you do. I know that you never quit. I know that I just hurt your feelings. I love you so much, Mom, and you must rest assured that I know you love me!”

Like me, my siblings have a decidedly weird sense of humor. Later when I reveled in the firm conviction that my mom had finally said all the things I longed to hear, they told me she was talking to them. Several of us teased, cried, and elbowed one another saying,

Each of us decided that her final words were everything we needed to hear from our mother. Rarely one to mince words, we know beyond a doubt that she will one day set us straight. In all likelihood, what she really said will turn out to be something like,“Could you guys back off and give me a little space? God’s coming and you’re in His way!” But until then, if it’s all the same to you, we’ll each think what we want.

Despite the cheesy picture decking the front of the Christmas card (yes, we send out those cards too), no family is perfect, and perhaps none less so than the one that tries to convince us it is. At the Moore home, we’ve given that up.

We’re not cynical though, because we know as well as anyone could that entire families can be changed. I’ve seen it for myself. I am currently watching it happen in my own family of origin, but what has already happened in Keith’s is nothing less than stunning. He and I have asked God to chase down every member of our extended families and make them His own. To heal any brokenness with His love and make every life matter. We’ve asked Him for such a mark on our family line that no generation will be without lovers of His Word, teachers of His truth, and followers of His way — right up to the very return of Christ.

Was it worth it? Was it worth not just accepting the family status quo but believing God for a better way? A healthier way? Was it worth being misunderstood? Was it worth being told you think you’re better than them? Is it really possible to still treasure what you love most about your family’s ways but exercise the prerogative to dump what you don’t? You bet it is. Little by little we watched family resentment turn into at least a hint of respect, and at most a holy jealousy to have for themselves what we had found.

Sometimes the biggest favor you could ever do for your loved ones is the hardest. I wouldn’t have told you that very private and painful story about my mom except that I need to earn enough credibility with you to make this next statement: nobody gets the right to keep you in a pit or to shame you for bailing. Not even your mama.

When God performs a dramatic deliverance in our lives, the nature of some of our closest relationships inevitably changes. The healthier we get, the more we realize how unhealthy we were.

Cooperating with God through painful relationship transitions may be the hardest work of all in our deliverance from the pit. Persevere with Him and trust Him — not just with your life, but also with their lives. You weren’t doing them any favors by staying in the pit with them, despite what they say. Keep your feet upon that Rock no matter how plaintively beloved voices call from the pit and beg you to come quickly. Just as you waited upon God for your own deliverance, wait upon Him for theirs. Pray hard for them. Pray those Scriptures in the back of this book on their behalf. Love them lavishly, but as a Rock-dweller, not a fellow pit-dweller.

Excerpted with permission from Get Out of That Pit by Beth Moore, copyright Beth Moore.

Do you have a family pileup and feel stuck in a pit of the same old behaviors? Most of us have been there. I certainly have! What are you doing to trust God for your deliverance and for the ones you love but cannot relate with the same way anymore? How are you different in those relationships? Come share with us on our blog! We want to hear from you about getting out of the pit! ~ Laurie McClure, Faith.Full