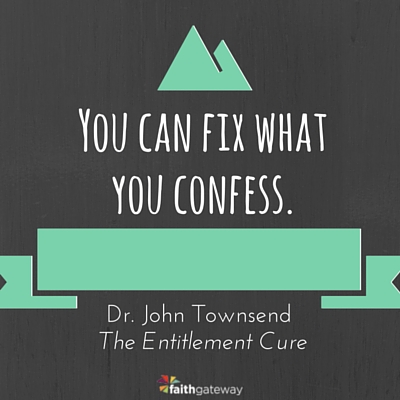 The Power of Confession

What’s the big deal about saying, “I was wrong”?

I have noticed a pattern in my work with people, a sharp contrast between successful individuals and those who stay stuck in life. It’s an inverse relationship: Successful people point to their failures, while failing individuals point to their successes. While there are certainly exceptions to the rule, the pattern is that the mega-achievers have no problem bringing up their massive screw-ups — in fact, they seem to enjoy it. I think their character is integrated, with lots of ambition, but with little shame and self-judgment. I had one high-performing leader tell me about a deal in which he’d made millions, and then he finished the story with, “And I found out later that the other side negotiated better than I did, and I could have done twice as well. But, oh well.” He didn’t seem embarrassed at all, nor did he speak as if he had an image to protect.

By contrast, with the second group, you can go through all sorts of contortions in a conversation with them, and it’s like trying to wrestle down a greased pig to get them to admit fault. They will describe how they were cheated, or how circumstances worked against them, or how bad the timing was.

This inverse relationship is no coincidence. The successful try things, make mistakes, look their mistakes in the eye, learn, and try again at a more informed and educated level. In this way, they’re likely to achieve even greater success over time. And the failures feel helpless, victimized, and unlucky. Sadly, they’re doomed to repeat their pasts over again — until they learn the value of “I was wrong,” followed by no buts.

Life gives us multiple opportunities to practice saying, “I was wrong.” For instance, you could say, “I was wrong when I…

didn’t finish school and decided to play harder instead.”

slacked off at work and lost my job.”

made my marriage about me and not about serving my mate.”

thought I could live like I was nineteen when I was thirty-six.”

didn’t stand up for myself in a terrible relationship.”

rescued and enabled my adult kid and drained myself.”

You are simply saying, “Yes, I did it.” It’s not a pleasant or enjoyable thing to say. I say it all the time to my family, friends, and business associates, and it never feels fun. But “I was wrong” has unbelievable power to cure entitlement and to give you a launch into a great life.

You Can Fix What You Confess

And on the flip side, you can never fix what you don’t confess.

If a company asks me to consult with them, the first thing I do is spend a day with the management team. I interview people, look at reports and financials, and observe how they interact in a team meeting. At the end of the day, I give them a diagnosis: “Great organization, but you need more targeted marketing,” or “more seamless systems,” or “a healthier culture.” If they agree, they are confessing that something is wrong and needs improvement. In that case, we are on our way to making things better.

But if they say, “My department isn’t the problem — it’s the other guys,” and the other guys say the same thing, we have nowhere to go and nothing we can fix.

It is the same thing in relationships. When neither side “owns their stuff,” be it selfishness, withdrawal of love, control, judgmentalism, deception, or irresponsibility, the couple simply has nowhere to go and nothing they can fix. That is why, when I work with couples, I spend a lot of early time having people discover and take ownership of their own contributions to the connection problems. It’s hardly ever 50 – 50, and sometimes it’s 90 – 10. But I’ve yet to see a totally innocent partner in a relationship problem.

One of my rules is, “If you’re spending more energy focused on the issues of your partner than on your own, even if the person is an addict or a felon, you’re never going to be happy or healthy.”

Why not? Because until you do your own “I was wrong,” you won’t learn what inside of you keeps you rescuing, enabling, or putting up with bad behavior.

This is one of the main reasons it’s so difficult to become a Christian.

You can’t just join the club and start going to church. You have to tell God, “I’ve sinned.” In other words, “I was wrong.” What a humbling statement! And yet it’s a requirement for accepting Christ’s sacrifice for your sins. If there is no disease of sin to confess, there is no sense or logic in receiving the antidote of forgiveness. Listen to John:

If we claim to be without sin, we deceive ourselves and the truth is not in us. If we confess our sins, He is faithful and just and will forgive us our sins and purify us from all unrighteousness. — 1 John 1:8-9

And yet look at the benefit from the spiritual side. You can fix, or God will fix, what you can confess. The problem of guilt and alienation from Him gets erased forever. The central reality of life has changed.

“I was wrong” is a very, very healing sentence. [tweet this]

Excerpted with permission from The Entitlement Cure by Dr. John Townsend, copyright Zondervan.

How good are you at saying “I was wrong”? Is confession something that you’ve made a practice or is it an area where you need to grow in? Come join us in talking about admitting when we’re wrong on our blog. We would love to hear your thoughts!