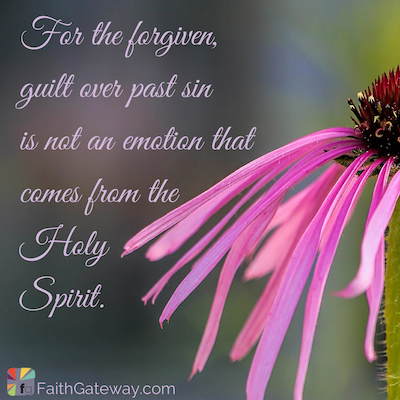 The apostle Paul offers good advice in Philippians 3:13 where he says (my paraphrase),

I don’t consider that I’ve already arrived but here is what I do. I forget those things that are in my past and focus on my future in Christ Jesus.

This is the guy who was complicit in many state-sponsored incarcerations and murders of Christians. Think his conscience didn’t torment him from time to time? Paul was a real person who had to discipline his mind to be filled with thoughts of the future God had called him to.We need to do the same. We need to say no to guilt.

First off, let’s recognize that for the forgiven, guilt over past sin is not an emotion that comes from the Holy Spirit. If guilt rises up to torment, it isn’t from God.

The deceiver wants you and me to wallow in the cesspool of guilt over past (but forgiven) sin. It’s one of his best tricks, distracting Christians from the life God intends by relentless guilt over that which has already been paid for. Feelings of guilt over forgiven sin are from the enemy, which Ephesians 6:12 makes clear. We’re not just wrestling within ourselves. This fight (a struggle, a war) is against principalities, powers, and spiritual wickedness in high places.

The next time the Enemy wants to take you down with guilt over forgiven sin, take every thought captive to the lordship of Jesus Christ. In other words, be so familiar with what the Bible says about your forgiveness that whatever you are experiencing may not be viewed in a manner contradictive to what you know to be true. When guilt rears its disfigured head, immediately say, “I take that thought captive to the lordship of Jesus Christ.” Why say it out loud? The Enemy can’t read your thoughts but he can hear you. Let him hear, every time he tempts you with guilt, your bold calling on the name of Jesus. The last thing Satan wants is for his efforts at destroying you through the dirtiness of guilt to result in you coming to the one who has already won the victory. Resist the devil and he will flee (James 4:7).

Excerpted with permission from A Beautiful Defeat by Kevin Malarkey, copyright Thomas Nelson, 2014.

Do you struggle with self-condemnation over past sins? Say NO to guilt! Take a moment today to pause and reflect on what Scripture says about your forgiveness. Say out loud, “I’m forgiven!” Join the conversation on our blog! We would love to hear from you about learning to say no to guilt! ~ Devotionals Daily 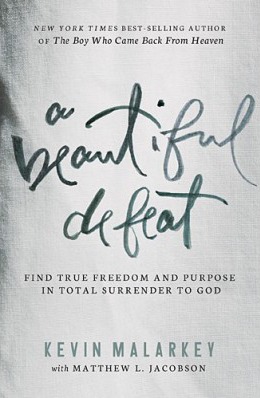