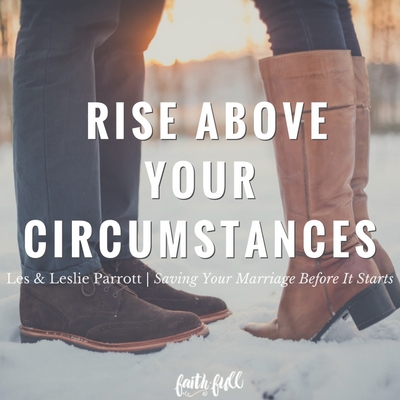 Dr. Allen Parducci, a prominent UCLA researcher, asked this question and found that money1, success, health, beauty, intelligence, or power have little to do with a couple’s “subjective well-being” (labspeak for happiness). Instead, research reveals that the level of a couple’s joy is determined by each partner’s ability to adjust to things beyond his or her control.2 Every happy couple has learned to find the right attitude in spite of the conditions they find themselves in.

Can you imagine for a moment how the Christmas story might have been written if Mary and Joseph had not had the capacity to adjust to things beyond their control? To begin with, Joseph had to adjust to the fact that Mary, his fiancée, was pregnant. According to Old Testament law, he could have had her stoned or sent her into some large distant city like Rome, Carthage, or Ephesus. Before he could break with her, however, God sent an angel to tell Joseph that Mary was with child by the Holy Spirit and would give birth to a son whose name would be Jesus.

So instead of sending Mary away, Joseph married her.3

While the first year of marriage is always difficult, Mary and Joseph faced a unique set of challenges. Nine months of pregnancy require enormous adjustments from a couple, regardless of how long they’ve been married — and this was no run-of-the-mill pregnancy.

On top of dealing with the implications of the impending birth, Mary and Joseph were trying to establish their home, run a business, and learn how to live with each other seven days a week. Further, they were forced to close down their business and travel to Bethlehem as the first step of a Roman plan to raise taxes. Just what they needed!

Early one morning, Mary and Joseph left their honeymoon abode behind them as they went out of the gate of Nazareth en route to Bethlehem. She was riding on the back of a little burro. (No easy ride. Some women can hardly ride in a Buick while they are waiting for the birth of a child, let alone on the back of a donkey!) Joseph had a short tether wrapped around his arm and anchored securely in his big fist to keep the little burro from dislodging Mary, who was more than eight months pregnant. At night they did not stop in a rooming house or motel as people might today. They stopped along the road, cooked with makeshift arrangements, slept on the hard ground, and made the best of a difficult situation.

Finally, when they arrived within sight of the city of Bethlehem, Mary stopped. She could not go another step. We can imagine her looking up at her husband and saying something like, “Joe, I cannot take another step. I am going to sit down here under this olive tree, and I want you to go into the city of Bethlehem and get us a room in the Bethlehem Hilton. I would like one in the front if possible so I can watch the crowds go up and down, and I will get room service and wait out the time for the baby to come.”

Mary was a long way from home, worn-out, tired, emotionally drained, and at the end of her rope. Furthermore, she must have wondered what she would do if her labor pains began and Joseph was not near. After all, her baby was almost due. Her anxiety level must have risen as she waited, watched, and eagerly  scanned the highway for the familiar figure of Joseph. The teeming crowds moving along the highway paid her no attention.

The good news is… the bad news can be turned into good news… when you change your attitude! ~ Robert H. Schuller

Finally Joseph returned, his characteristic smile gone, his shoulders drooping. She listened as he told her his story: “Mary, I went to the hotel, but there was no room. It’s filled with convention people. In fact, I went up and down the main street to every hotel and motel, but there are no rooms. Finally, I persuaded an old man to let us stay in the barn with his animals. He’s charging an exorbitant price, Mary, but he promised me he would clean out the manure and cover the floor with fresh straw. And most of all, Mary, he said we could be alone, and he would not make us share the stall with any other couple.”

Their hearts heavy, Mary and Joseph made their way to the stable, thankful at least for a shelter from the cold wind.

That night the Son of God was born.

Can you imagine how the Christmas story might have been written if Mary and Joseph had not had the capacity to adjust to things beyond their control?

Every couple on earth must learn to develop this capacity if they are to enjoy a happy marriage. Life is filled with too many unexpected turns and unforeseen problems. You may not experience the challenges Mary and Joseph faced, but you will encounter your own unique set of difficulties. Without the capacity to rise above your circumstances, you will never cultivate happiness. You may have more success, beauty, intelligence, health, and wealth than anyone else, but if you do not cultivate contentment in every circumstance, unhappiness is certain.

3. To understand the problem of Mary and Joseph, we have to know something about marriage customs in those days. A betrothal was the forerunner of the engagement in modern romances. At the betrothal, the couple was legally bound and could not be separated except by divorce. It could be a matter of years before they were married, and even the marriage ceremony itself covered several days or as long as a week. Relatives who came ninety miles on the back of a donkey wanted something more than a piece of sheet cake before they returned home! So they stayed around to catch up on family news, build their relationships with each other, and rejoice with the bride and groom. Only when the days of the marriage ritual were ended did the couple begin living together. For  Mary, it was sometime after the betrothal and before the marriage that she became pregnant. This called for a major adjustment on both Mary and Joseph’s parts.

If you are married, have you learned the art of finding the right attitude in spite of the conditions you as a couple find yourselves in? Come share your stories of having to flex happily together in surprising, disappointing, and chaotic circumstances. We want to hear from you! ~ Faith.Full