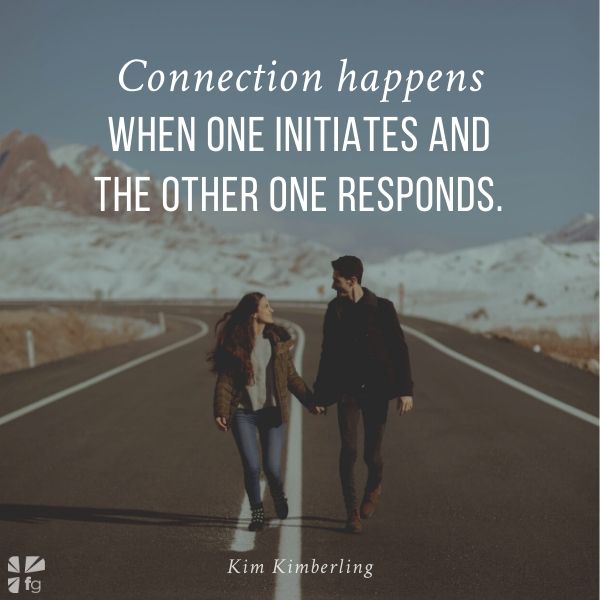 from 7 Secrets of an Awesome Marriage

Connect – The Art of Listening and Being Present

Putting God first in your marriage creates an environment for success. That is where God wants to be, and that is how He designed it to work. Then God makes it clear that the marriage relationship is the second most important relationship we have in this life. More important than other family members. Even more important than your kids, which we’ll get to later. Keeping our focus on God puts our priorities where they need to be. In other words, He designed for us to connect with each other.

Often couples who connect so well while dating can find themselves as strangers just a few years into their marriage. Tom and Sarah found themselves in that challenging place.

From the first time I met them I thought that they were a special couple. Tom and Sarah were attending a new preparing-for-marriage class that I was teaching. They stood out not just because they were sitting in the front row but because they just seemed to get it. They saw the bigger picture. They understood that a good marriage would take a lot of work, and they already knew that God had to come first. They always showed up to class early and often stayed after class to ask questions. I remember telling them that if they worked as hard at marriage as they were working at preparing for it, they would have the marriage they both wanted.

It was almost seven years later that I got a call one day at my office from Sarah. She asked me if I remembered her and Tom, and when I said yes, she broke down in tears and said they were about ready to give up on their marriage. Now, I have been counseling  people for a long time and nothing much surprises me, but this call from Sarah did. What in the world had happened to this couple who at the start seemed on the right track to build a successful marriage?

A couple of days later, they came to my office. As a counselor I look at the nonverbals because body language can reveal a lot. As they sat down on my couch, Tom hugged one end and Sarah the other. They did not look at each other, and the tension between them was almost visible. Honestly, if they had walked in without identifying themselves, I am not sure that I would have recognized them. They were not the same couple who had sat in the front row of my class seven years before.

As we talked and unpacked the past seven years, they’d had no major marriage-altering event. No affair. No pornography. No abuse. No addictions. Instead I saw a series of baby steps that took them away from each other over a long period of time. Tom got a promotion and spent more time at work and less time at home. Sarah had two babies, and when she quit her job to stay at home, the kids became her priority.

When they were together, the time was usually kid-focused, and by the time they hit the bed at night, both were exhausted. I asked them about their sex life, and they could not remember the last time they had been together physically. There were no dates, no romance, no connection, no communication. The slide from the mountaintop to the bottom had taken time, but they were now there and had no hope that things would change.

Tom and Sarah were somewhat unique as a premarital couple, but seven years into marriage, their story was one I hear often from couples married seven, ten, fifteen, and twenty-five years or more. Life happens, and because they quit communicating in the day to day, they lose connection.

In God’s design for marriage, as we learned in the last chapter, He wants to be at the center. Ecclesiastes 4:12 says,

A cord of three strands is not quickly broken.

I believe this is the husband, the wife, and God knit together so tightly that they cannot be broken apart. Two things happened to Tom and Sarah. They quit putting God first, and each quit putting the other second. Simply, the cord unraveled, and instead of fighting for their marriage, they began to fight each other.

If you’ve had any exposure whatsoever to marriage resources, you know what experts say is essential over and over again: communication. Of the couples I see in counseling, the ones who really communicate well and set aside time to do so seem to consistently also have good marriages.

But in all this hype about communication, here’s what is often missed: communication does not simply mean the talking kind. It means connection in a special way. It was clear that Tom and Sarah, as they sat coldly apart in my office, had lost their connection somewhere along the way.

Most couples communicate pretty well before marriage. I have seen surveys that usually put that number at around three hours a day. On the other hand there are surveys that say those same couples a few years into marriage will spend an average of five minutes a day communicating.1 What happens? The reasons may vary from couple to couple, but the bottom line is that we quit making it a priority. We lose sight of God’s design.

When Nancy and I were in college, we began dating halfway through Nancy’s freshman year. At Texas Christian University, there were still dorm hours for the girls. That meant that the girls had a curfew. The guys did not, but the system worked. If the girls were in, the guys went in. On our dates we would wait until the last minute before curfew — I got the evil eye more than once from the dorm mother as I rushed Nancy in the door just before it was closed and locked for the night. I would then hurry back to my room to call her on the phone (pre – cell-phone era), and we would talk for hours. That went on for two years. Then we got married.

Once we lived together, I would go to work, come home, have dinner, watch TV, spend time with Nancy, and go to bed. I think because we could be together more, we did not work as hard at communicating. Communication time shrank. I did not have to work at finding time to be with Nancy. She was there. She was there in the morning. She was there at night. She slept by my side. The changes in our communication patterns were so subtle that we did not realize they were taking place. We had been close and connected for a long time. Our communication had been great. She was my best friend and I was hers. Now a few years into marriage, we were beginning to feel like strangers.

There will always be distractions in life that keep us from connecting. Some are good and some are not. Some are necessary and some we choose.

In the early days of our marriage, I often chose to spend my time on work, TV, tennis, and hanging out with friends. None were bad in and of themselves, but Nancy no longer felt she was important. She was not always my number two.

Nancy’s schedule was different from mine. She was finishing college and had a lot of free time. She was now a married student who went to class and then came home. She was bored, missed her TCU college friends, and was not as happy as she thought she would be. In her evaluation, it was my fault.

At that point, we should have turned to each other and said let’s get back on track. We could have worked together to figure this early marriage thing out. We could have, but we did not. Instead of embracing our differences and dealing with them, we embraced the distractions and slowly stepped away from each other. Our communication that was so good before marriage got worse and worse. We were morphing into the thirty-five-minutes-a-week communication statistic. Things needed to change, or this marriage would end in disaster.

How connected are you today with your spouse? Are you more connected than ever, or are you becoming strangers? Think about a typical day and the things that you do. How do you spend your time? How much time do you set aside to connect with your spouse?

I can sit in the same room or on the same couch with Nancy and not be connected. Just being in each other’s presence does not connect us. Sure, it helps. The opportunity is there, but to connect, someone has to initiate. That initiation may be a conversation, or it could be a hug or a kiss. Connection happens when one initiates and the other one responds. So you have to make a choice in how to spend your time together.

Excerpted with permission from 7 Secrets to an Awesome Marriage: Strengthen Your Most Intimate Relationship by Kim Kimberling Ph.D., copyright Kim Kimberling, Ph.D.

How can you better initiate connection in your marriage, or in your other relationships? We’d love to hear your thoughts in the comments!