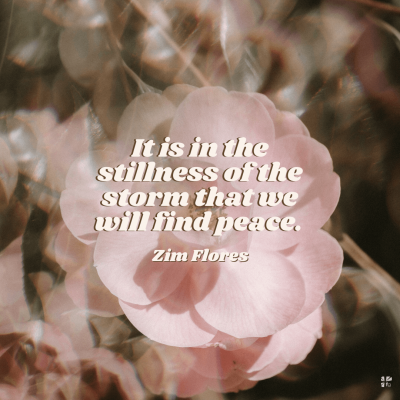 I HELD MY BREATH.

My boyfriend and I had been talking about it for weeks, but honestly, I had hoped he’d forgotten about it. I slowly sauntered through the aisles of my favorite store, pausing in front of a line of curly haircare products.

“I think we should take that break,” he suggested.
I paused and took a deep breath. “Okay,” I hesitantly replied. “We both need some time away to make sure that we’re hearing from God regarding our next steps.” “How long?”

“I’m thinking four weeks of no talking, followed by three weeks of text only. So seven weeks total.”

When we had our last conversation just before midnight, I began pacing the streets of Monroe Park in Washington, D.C. And then the clock struck midnight. There I was, alone. My safety net robed in human flesh, now gone.

Little did I know that God would use those seven weeks to orchestrate a radical shift in my life that would allow me to start over. The safety that I had found in my life just twenty-four hours prior would never again exist.

A few days after the beginning of our temporary break, my world began shifting. One bad product launch led to the prospect of either raising more capital for my business or making the difficult decision to sell. I spent weeks oscillating between babbling tears and steady composure. I was failing miserably. And to make matters worse, I couldn’t speak to the one person who knew me best. The most important decision of my life would be made without the person who held my security in his hands. At the end of the four weeks, the decision was final: I was selling the company.

I cried aloud to the Lord, and he answered me from his holy hill. Selah. — Psalm 3:4

Zimism – God will orchestrate circumstances to force your pause.

But would I have really made the decision to sell if I bounced this idea off of him beforehand? Probably not. You see,

— a pivotal decision-making moment. And in that moment, He tested me. I would either run or stand.

The word selah is mentioned roughly seventy-four times in the Bible. Although its exact meaning is unknown, many scholars agree that its meaning necessitates two things: a pause and a praise.

One by one, the team with whom I had built my successful company began to submit their resignation letters. Their faith in my leadership had all but diminished. My decision to keep our business small meant that we weren’t exploring new channels at a fast-enough pace, and my desire to keep a business centered on Christ wasn’t working either.

I was stubborn. A perfectionist even. My leadership training, despite my best efforts, wasn’t sticking. And as hard as I tried, I felt like no one understood me.

If I truly wanted to build something God-centered, I had to give up what wasn’t.

In a little under sixty days, the papers were signed. The deal was done. I no longer owned the company I started. In the months that followed, everything that my team had worked so hard to build became unrecognizable. I felt isolated and alone, with no one to talk to. I went through one of the greatest transformations of my life during this time, and all I could do was retreat and reflect on my failures and what I could have done differently — or what I might do differently now if given the chance.

I had given up what had been the most important marker of my identity for the past four years. Even though what I did was a sacrifice unto God, the darkest period of my life didn’t feel like an apt reward. I gave up my security. I felt abandoned by industry friends. I felt like less of myself than ever. And as much as I wanted out of the struggle, I stayed.

The book of Jonah chronicles a man of the same name who rebelled against the instructions of God and fled from Nineveh. He was tossed into a tumultuous sea, only to be swallowed by a giant fish that God had appointed. Inside the fish’s belly, Jonah was faced with a decision: he could either force his way out of the fish — gutting it from the inside out — or he could embrace the stillness.

The situation couldn’t have been comfortable for Jonah. It was probably terrifying. He probably felt stranded, trapped on all sides even. But as he prayed to God, he didn’t pray for deliverance, like many would have.

It was only while being still, inside the fish, that he received revelation. There he was, trapped in the belly of this creature for three days and three nights. Instead of trying to escape, he made a declaration. He acknowledged his own shortcomings and thanked God, offering up a sacrifice of praise and proclaiming that God had the final say. Salvation belonged to Him.

Instead of trying to escape, he made a declaration.

In times like these, it’s important that we don’t find ourselves desiring deliverance more than revelation. Sometimes, when we don’t understand what’s happening around us, we just want the pain to stop. We want to press fast-forward on the season we’re currently in. We want to jump to the place where we already have the success, the money, and the prestige. We also want it without the pain, discomfort, or effort. Without the tears. Without the loneliness and isolation. But wanting out too early simply evades the process that God wants us to go through. It eliminates the growth we’ll experience if we stay the course.

Jonah fled God’s instruction because he knew that He was compassionate. He knew that God would forgive a nation that was wicked against Him. But it was that same compassion that led to his sympathetic prayer inside the belly of the fish.

Joseph, a man of God sold into slavery by his brothers, could interpret dreams. It was this same gift that allowed him to rise to power in the land of his affliction.

God has given each of us traits that we can use during hard times. There are countless examples of men and women of God being put to the test. But what is most noble and notable about their stories isn’t of their escape; it’s what happened when they endured. God has proven over and over that He will bless our endurance. He sees exactly what we’re going through and will respond at just the right time.

Zimism – The work that God wants to do in us requires both our pause and our praise.

And as much as we desire the rescue, we have to find comfort in the discord. The Bible tells us in Isaiah 66:9 that God will not cause pain without something new being born.

It is in the stillness of the storm that we will find peace.

It’s in the early mornings alone.
It’s in our quiet time with the Lord.
It’s in the silent sobs.

Refusing to gut the fish means that we’re committed to the assignment God has for us. It’s saying to God, “I know You brought me to this new place; I refuse to move back home.” It’s declaring that the goodness God has for us is just on the other side of the mission.

It is in the stillness of the storm that we will find peace.

Even in our darkest hours, we are still under the protection of the Lord. We will never understand our purpose if we always gut the fish. Even Jesus retreated into solitude. And when He was tempted by the devil, He didn’t run. He stayed, eventually fulfilling His purpose.

What would have happened if I had gone running back to my boyfriend during our break? As godly a man as he was, God didn’t need someone else clouding my judgment or testing my obedience. He needed me to stay put and trust in His sovereignty.

All that the Lord blessed me with was a direct result of my commitment to staying in the belly of the fish — not begging for deliverance but thanking God for the blessings to come. I thank Him — not for the hardship but for the assignment.

Choosing not to gut the fish is perhaps the most grueling part of it all. We know that God sees what’s happening, and sometimes it seems like cruel and unusual punishment. But how else will God grow us? Certainly not by laying out His entire plan in front of our eyes.

Zimism – Your God-given gifts will make room for unexpected pockets of grace for when you need it most.

Excerpted with permission from Dare to Bloom by Zim Flores, copyright Zimuzor Flores.

Are you going through a trial? Don’t gut the fish to try to escape your situation! Ask the Lord to develop you and hone you instead as you praise Him. Pause. Shift your perspective. Focus on Jesus! ~ Devotionals Daily