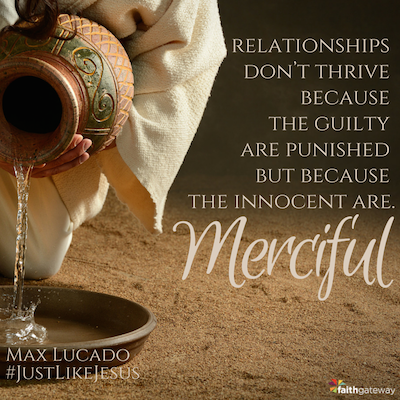 Of all the times we see the bowing knees of Jesus, none is so precious as when He kneels before His disciples and washes their feet.

It was just before the Passover Feast. Jesus knew that the time had come for Him to leave this world and go to the Father. Having loved His own who were in the world, He now showed them the full extent of His love. The evening meal was being served, and the devil had already prompted Judas Iscariot, son of Simon, to betray Jesus. Jesus knew that the Father had put all things under His power, and that He had come from God and was returning to God; so He got up from the meal, took off His outer clothing… and began to wash His disciples’ feet, drying them with the towel that was wrapped around Him. – John 13:1-5

It has been a long day. Jerusalem is packed with Passover guests, most of whom clamor for a glimpse of the Teacher. The spring sun is warm. The streets are dry. And the disciples are a long way from home. A splash of cool water would be refreshing.

The disciples enter, one by one, and take their places around the table. On the wall hangs a towel, and on the floor sit a pitcher and a basin. Any one of the disciples could volunteer for the job, but not one does.

After a few moments Jesus stands and removes His outer garment. He wraps a servant’s girdle around His waist, takes up the basin, and kneels before one of the disciples. He unlaces a sandal and gently lifts the foot, places it in the basin, covers it with water, and begins to bathe it. One by one, one grimy foot after another, Jesus works His way down the row.

In Jesus’ day the washing of feet was a task reserved not just for servants but for the lowest of servants.

Every circle has its pecking order, and the circle of household workers was no exception. The servant at the bottom of the totem pole was expected to be the one on his knees with the towel and basin.

In this case the one with the towel and basin is the King of the universe. Hands that shaped the stars now wash away filth.

Fingers that formed mountains now massage toes. And the One before whom all nations will one day kneel now kneels before His disciples. Hours before His own death, Jesus’ concern is singular. He wants His disciples to know how much He loves them. More than removing dirt, Jesus is removing doubt.

Jesus knows what will happen to His hands at the crucifixion. Within twenty-four hours they will be pierced and lifeless. Of all the times we’d expect Him to ask for the disciples’ attention, this would be one. But He doesn’t.

You can be sure Jesus knows the future of these feet he is washing. These twenty-four feet will not spend the next day following their Master, defending His cause. These feet will dash for cover at the flash of a Roman sword. Only one pair of feet won’t abandon Him in the Garden. One disciple won’t desert Him at Gethsemane – Judas won’t even make it that far! He will abandon Jesus that very night at the table. I looked for a Bible translation that reads, “Jesus washed all the disciples’ feet except the feet of Judas,” but I couldn’t find one.

What a passionate moment when Jesus silently lifts the feet of His betrayer and washes them in the basin! Within hours the feet of Judas, cleansed by the kindness of the one He will betray, will stand in Caiaphas’s court.

Behold the gift Jesus gives His followers! He knows what these men are about to do. He knows they are about to perform the vilest act of their lives. By morning they will bury their heads in shame and look down at their feet in disgust. And when they do, He wants them to remember how His knees knelt before them and He washed their feet. He wants them to realize those feet are still clean.

You don’t understand now what I am doing, but you will understand later. – John 13:7

From the Basin of His Grace

Oh, I could never do that, you object. The hurt is so deep. The wounds are so numerous. Just seeing the person causes me to cringe. Perhaps that is your problem. Perhaps you are seeing the wrong person or at least too much of the wrong person. Remember, the secret of being just like Jesus is “fixing our eyes” on Him. Try shifting your glance away from the one who hurt you and setting your eyes on the One who has saved you.

Note the promise of John,

But if we live in the light, as God is in the light, we can share fellowship with each other. Then the blood of Jesus, God’s Son, cleanses us from every sin. – 1 John 1:7

Even more, He is still cleansing us! John tells us, We are being cleansed from every sin by the blood of Jesus. In other words, we are always being cleansed. The cleansing is not a promise for the future but a reality in the present.

Let a speck of dust fall on the soul of a saint, and it is washed away. Let a spot of filth land on the heart of God’s child, and the filth is wiped away. Jesus still cleans His disciples’ feet. Jesus still washes away stains. Jesus still purifies His people.

Our Savior kneels down and gazes upon the darkest acts of our lives. But rather than recoil in horror, He reaches out in kindness and says, “I can clean that if you want.” And from the basin of His grace, He scoops a palm full of mercy and washes away our sin.

If I, your Lord and Teacher, have washed your feet, you also should wash each other’s feet. I did this as an example so that you should do as I have done for you. – John 13:14-15

The mercy of Christ preceded our mistakes; our mercy must precede the mistakes of others. Those in the circle of Christ had no doubt about His love; those in our circles should have no doubts about ours.

What does it mean to have a heart like His? It means to kneel as Jesus knelt, touching the grimy parts of the people we are stuck with and washing away their unkindnesses with kindness. Or as Paul wrote,

Be kind and loving to each other, and forgive each other just as God forgave you in Christ. – Ephesians 4:32

Perhaps you aren’t. But neither was Jesus. Of all the men in that room, only One was worthy of having His feet washed. And He was the One who washed the feet. The One worthy of being served, served others. The genius of Jesus’ example is that the burden of bridge building falls on the strong one, not on the weak one. The one who is innocent is the one who makes the gesture.

Don’t we all think we are right? Hence we wash each other’s feet.

Please understand: relationships don’t thrive because the guilty are punished but because the innocent are merciful.

The Power of Forgiveness

Recently I shared a meal with some friends. A husband and wife wanted to tell me about a storm they were weathering. Through a series of events, she learned of an act of infidelity that had occurred more than a decade ago. He had made the mistake of thinking it’d be better not to tell her, so he didn’t. But she found out. And as you can imagine, she was deeply hurt.

Through the advice of a counselor, the couple dropped everything and went away for several days. A decision had to be made. Would they flee, fight, or forgive? So they prayed. They talked. They walked. They reflected. In this case the wife was clearly in the right. She could have left. Women have done so for lesser reasons. Or she could have stayed and made his life a living hell. Other women have done that.

But she chose a different response. On the tenth night of their trip, my friend found a card on his pillow. On the card was a printed verse:

“I’d rather do nothing with you than something without you.” Beneath the verse she had written these words:

I forgive you. I love you. Let’s move on.

Certain conflicts can be resolved only with a basin of water.

Are any relationships in your world thirsty for mercy? Are there any sitting around your table who need to be assured of your grace? Jesus made sure His disciples had no reason to doubt His love. Why don’t you do the same?

Excerpted with permission from Just Like Jesus by Max Lucado, copyright Thomas Nelson.