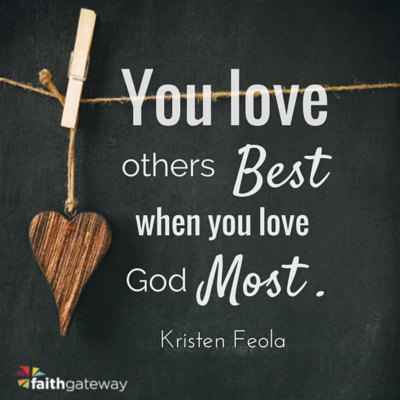 Living as a servant is everyone’s calling. Service to God and other people yields the highest rewards that heaven holds. ~ Ron Marinari

It was a bitter cold day in December. The temperature was below freezing, and the windchill was dangerously low. I had just picked up my daughter, Jocelyn, from preschool when I spotted an elderly lady walking along the sidewalk. All bundled up in a parka, she was doing her best to shield herself from a fierce headwind. She was tiny and couldn’t have weighed more than one hundred pounds.

As I drove past her, I sensed the Lord saying, “You should stop.” I kept driving. I’m too busy, I thought. It’s inconvenient. I just want to get home for lunch. After about thirty seconds, though, my desire to obey the prompting of the Holy Spirit was greater than the selfishness of my flesh. I turned the car around. I headed toward the woman and pulled up beside her.

“It’s too cold for anyone to be out in this weather. Can I give you a ride?” I asked.

“Yes, that would be nice,” she said quietly. Her nose was dripping, so I quickly handed her a tissue and helped her into the front seat. Once she got settled, I introduced myself and my daughter. When I asked her name, she said, “Georgia.”

Georgia was on her way to the bank, which was more than a mile away.

As I drove in that direction, I learned a little about my new friend. She was from California. She’d never married or had children but had worked for many years as a kindergarten teacher. Judging by her kind disposition and warm personality, I was sure she was an excellent one.

After we left the bank, I took Georgia home. I was surprised to learn she lived in our neighborhood. Georgia invited us to come inside her house.

What I saw when she opened the front door caused a deep ache in my heart. In the middle of Georgia’s living room were at least fifty stuffed animals, all placed neatly in rows, facing a small television — much like a classroom setting. Georgia introduced me to her “babies” and took great pride in showing them off. Most of the animals were battery-powered, and they would sing or talk at the push of a button. It made me sad to think the voices of those animals were probably the only sounds that broke the silence in Georgia’s world.

Next, she led us into her kitchen. The first thing I noticed was a small baker’s rack, which displayed a gorgeous set of dark-red dishes. Since I love to cook, I was fascinated by her collection. The second detail that caught my eye wasn’t something she had but rather something she didn’t have — a refrigerator. Tears flooded my eyes, and a lump formed in my throat.

“Yes, when I’m out walking,” she answered. Georgia told me that she would grab something at a restaurant or grocery store if she got hungry.

Georgia then showed us her sunroom. Thick black plastic covered the windows. She pulled aside one “curtain” to reveal what was behind it. Two cans of fruit cocktail and one can of mandarin oranges sat on the windowsill. It was her pantry.

As Georgia wrapped up the tour of her house, I told her I’d come to see her again. After giving Georgia a hug, I said goodbye, and Jocelyn and I left. On our way home, I called my husband at work to tell him what had happened.

“Justin, we have to do something,” I said. God had put this precious lady in my path for a reason, and I knew it wasn’t just to give her a ride. That night, the Feola family had a very special guest for dinner.

At another special meal more than two thousand years ago, Jesus sat down with twelve of His closest friends for their last supper together. However, the purpose was more than fellowship. Jesus wanted to teach His disciples an important lesson in leadership.

John 13:4 says Jesus did something highly unusual that night.

He got up from the meal, took off his outer clothing, and wrapped a towel around His waist.

He then poured water into a basin and began washing the disciples’ feet. Peter was shocked and offended. He couldn’t stand the sight of his Master acting like a servant! One commentary notes, “It would have been appropriate for one of the disciples to have washed Jesus’ feet, but the reverse is intolerable.”

“Lord, are you going to wash my feet?” Peter asked.

Jesus, realizing how scandalous his act seemed to the disciples, said, “You do not realize now what I am doing, but later you will understand.”

“No,” Peter objected, “You shall never wash my feet.”

Jesus answered, “Unless I wash you, you have no part with Me.”

After Jesus finished cleaning the disciples’ feet, “He put on His clothes and returned to his place.” He said, “Now that I, your Lord and Teacher, have washed your feet, you also should wash one another’s feet. I have set you an example that you should do as I have done for you” (John 13:14 – 15).

Jesus wasn’t encouraging His friends to open a foot-washing clinic. He was showing them how they would be most effective in sharing the gospel.

Serving others is a spiritual discipline which can be defined as action motivated by love.

Let’s not merely say that we love each other; let us show the truth by our actions.

The ultimate expression of love was shown when God sent His Son, Jesus, to die on the cross. The Bible says,

Very rarely will anyone die for a righteous person, though for a good person someone might possibly dare to die. But God demonstrates his own love for us in this: While we were still sinners, Christ died for us. – Romans 5:7-8

Although we didn’t deserve salvation, Jesus took the punishment for all of our wrongdoing — past, present, and future — so we could escape eternity in hell and live with him forever. Jesus showed us by his example that a life of service is a life of sacrifice:

The Son of Man did not come to be served, but to serve, and to give His life as a ransom for many. – Matthew 20:28

Being a servant requires laying down your pride and taking up humility. It demands your time and frequently involves your money or possessions. However, these things amount to nothing when you consider what Jesus did. John 15:13 says,

Greater love has no one than this: to lay down one’s life for one’s friends.

Your acts of service provide outward evidence of your inward love for God.

In other words, you love others best when you love God most.

Love prompted the King of Kings to humble Himself and wash the disciples’ dirty feet. Love led our Lord to the cross. Love is what we need to serve others.

Excerpted with permission from Spiritually Strong: The Ultimate 6-Week Guide to Building Your Body and Soul by Kristen Feola, copyright Zondervan, 2015.

Take time to slow down and be intentional with your time and resources. Look for opportunities to bless others and let your actions speaker louder than your words. What are some ways you can serve others today? Join the conversation on our blog. We’d love to hear from you! ~ Devotionals Daily