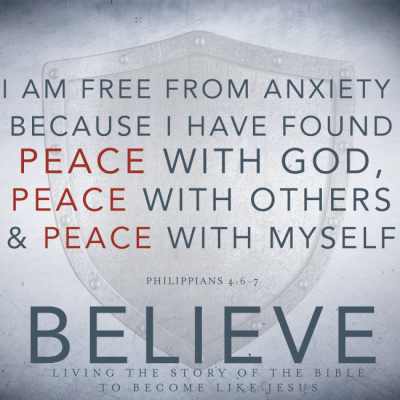 Two-thirds of the use of the word “peace” (shalom) in the Old Testament involves the fulfillment that comes to humans when they experience God’s presence. Such peace can be experienced from God’s presence in our lives even in difficult circumstances. King David went through many difficult seasons during his life, but one of his most painful was when his own son Absalom conspired against him. When there is a deep schism with a loved one, inner peace is at its most elusive.

In the course of time, Absalom provided himself with a chariot and horses and with fifty men to run ahead of him. He would get up early and stand by the side of the road leading to the city gate. Whenever anyone came with a complaint to be placed before the king for a decision, Absalom would call out to him, “What town are you from?” He would answer, “Your servant is from one of the tribes of Israel.” Then Absalom would say to him, “Look, your claims are valid and proper, but there is no representative of the king to hear you.” And Absalom would add, “If only I were appointed judge in the land! Then everyone who has a complaint or case could come to me and I would see that they receive justice.”

Also, whenever anyone approached him to bow down before him, Absalom would reach out his hand, take hold of him and kiss him. Absalom behaved in this way toward all the Israelites who came to the king asking for justice, and so he stole the hearts of the people of Israel.

At the end of four years, Absalom said to the king, “Let me go to Hebron and fulfill a vow I made to the Lord. While your servant was living at Geshur in Aram, I made this vow: ‘If the Lord takes me back to Jerusalem, I will worship the Lord in Hebron.’”

The king said to him, “Go in peace.” So he went to Hebron.

Then Absalom sent secret messengers throughout the tribes of Israel to say, “As soon as you hear the sound of the trumpets, then say, ‘Absalom is king in Hebron.’” Two hundred men from Jerusalem had accompanied Absalom. They had been invited as guests and went quite innocently, knowing nothing about the matter. While Absalom was offering sacrifices, he also sent for Ahithophel the Gilonite, David’s counselor, to come from Giloh, his hometown. And so the conspiracy gained strength, and Absalom’s following kept on increasing.

A messenger came and told David, “The hearts of the people of Israel are with Absalom.”

Then David said to all his officials who were with him in Jerusalem, “Come! We must flee, or none of us will escape from Absalom. We must leave immediately, or he will move quickly to overtake us and bring ruin on us and put the city to the sword.”

The king’s officials answered him, “Your servants are ready to do whatever our lord the king chooses.”

The king set out, with his entire household following him; but he left ten concubines to take care of the palace. – 2 Samuel 15:1–16

The whole countryside wept aloud as all the people passed by. The king also crossed the Kidron Valley, and all the people moved on toward the wilderness. – 2 Samuel 15:23

David continued up the Mount of Olives, weeping as he went; his head was covered and he was barefoot. All the people with him covered their heads too and were weeping as they went up. – 2 Samuel 15:30

David wrote many of his psalms from a place of anguish and despair, yet they all seem to take a turn and end in trust and even rejoicing. The editors of the book of Psalms connected Psalm 3 with this specific situation between Absalom and David. Although inner peace would seem impossible for one who is fleeing in anguish from his own son, in the end David found inner peace because he fixed his thoughts on God’s presence in his life.

A psalm of David. When he fled from his son Absalom.

Lord, how many are my foes!

How many rise up against me!

Many are saying of me,

“God will not deliver him.”

But you, Lord, are a shield around me,

my glory, the One who lifts my head high.

I call out to the Lord,

and he answers me from his holy mountain.

I lie down and sleep;

I wake again, because the Lord sustains me.

I will not fear though tens of thousands

assail me on every side.

Deliver me, my God!

Strike all my enemies on the jaw;

break the teeth of the wicked.

From the Lord comes deliverance.

Worry is the chief robber of peace in our lives. It prevents us from lying down and sleeping in peace at night. It keeps us on edge during the day. Our Prince of Peace, Jesus, emphasized the immense capacity of God the Father to love and care for his people individually before they let the worries of this life overtake them. He also stressed the important role of the Holy Spirit, the gift of the Father, in supporting God’s people.

Therefore I tell you, do not worry about your life, what you will eat or drink; or about your body, what you will wear. Is not life more than food, and the body more than clothes? Look at the birds of the air; they do not sow or reap or store away in barns, and yet your heavenly Father feeds them. Are you not much more valuable than they? Can any one of you by worrying add a single hour to your life?

And why do you worry about clothes? See how the flowers of the field grow. They do not labor or spin. Yet I tell you that not even Solomon in all his splendor was dressed like one of these. If that is how God clothes the grass of the field, which is here today and tomorrow is thrown into the fire, will he not much more clothe you — you of little faith? So do not worry, saying, “What shall we eat?” or “What shall we drink?” or “What shall we wear?” For the pagans run after all these things, and your heavenly Father knows that you need them. But seek first his kingdom and his righteousness, and all these things will be given to you as well. Therefore do not worry about tomorrow, for tomorrow will worry about itself. Each day has enough trouble of its own. – Matthew 6:25–34

It’s true that each day has enough trouble of its own and, as followers of Christ, we must be prepared to deal with these troubles. It might be tempting to give in to the stress but, as Jesus vividly illustrated to His disciples, through our faith we can find peace and remain in control.

That day when evening came, He said to His disciples, “Let us go over to the other side.” Leaving the crowd behind, they took Him along, just as He was, in the boat. There were also other boats with Him. A furious squall came up, and the waves broke over the boat, so that it was nearly swamped. Jesus was in the stern, sleeping on a cushion. The disciples woke Him and said to him, “Teacher, don’t you care if we drown?”

He got up, rebuked the wind and said to the waves, “Quiet! Be still!”

Then the wind died down and it was completely calm. He said to his disciples, “Why are you so afraid? Do you still have no faith?” They were terrified and asked each other, “Who is this? Even the wind and the waves obey him!” – Mark 4:35–41

Jesus was constantly working to educate and reassure His followers. On the day before his crucifixion, Jesus talked to His disciples about a unique offer of peace. This peace comes only from God and is wholly different from the peace offered by the world.

“If you love Me, keep My commands. And I will ask the Father, and He will give you another advocate to help you and be with you forever — the Spirit of truth.

The world cannot accept Him, because it neither sees Him nor knows Him. But you know Him, for He lives with you and will be in you. I will not leave you as orphans;

I will come to you. Before long, the world will not see Me anymore, but you will see Me. Because I live, you also will live. On that day you will realize that I am in My Father, and you are in Me, and I am in you. Whoever has My commands and keeps them is the one who loves me. The one who loves Me will be loved by My Father, and I too will love them and show Myself to them.”

Then Judas (not Judas Iscariot) said, “But, Lord, why do you intend to show yourself to us and not to the world?” Jesus replied, “Anyone who loves Me will obey my teaching. My Father will love them, and We will come to them and make Our home with them. Anyone who does not love Me will not obey My teaching. These words you hear are not My own; they belong to the Father who sent Me.

All this I have spoken while still with you. But the Advocate, the Holy Spirit, whom the Father will send in My name, will teach you all things and will remind you of everything I have said to you. Peace I leave with you; My peace I give you. I do not give to you as the world gives. Do not let your hearts be troubled and do not be afraid.” – John 14:15–27

As Paul wrapped up his personal letter to the believers at Philippi, he spoke to them directly on how to obtain a peace that transcends all understanding.

Rejoice in the Lord always. I will say it again: Rejoice! Let your gentleness be evident to all. The Lord is near. Do not be anxious about anything, but in every situation, by prayer and petition, with thanksgiving, present your requests to God. And the peace of God, which transcends all understanding, will guard your hearts and your minds in Christ Jesus. Finally, brothers and sisters, whatever is true, whatever is noble, whatever is right, whatever is pure, whatever is lovely, whatever is admirable — if anything is excellent or praiseworthy — think about such things. Whatever you have learned or received or heard from me, or seen in me — put it into practice. And the God of peace will be with you. — Philippians 4:4–9

Excerpted with permission from Believe: Living the Story of the Bible to Become More Like Jesus by Randy Frazee, copyright Zondervan 2014.

The Lord is always near — He never leaves us! Be assured that you are not alone in whatever circumstances you’re facing. You have a good God on your side. Join the conversation on our blog. We’d love to hear from you about trusting God with your worry and anxiety! ~ Devotionals Daily