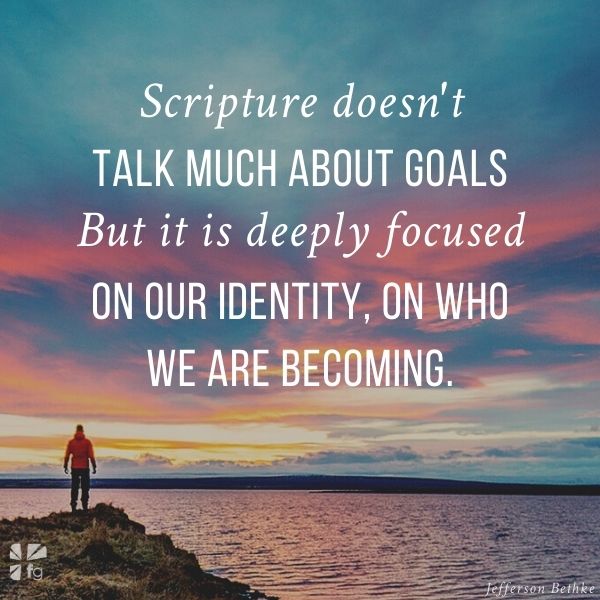 The term goals was virtually nonexistent before 1920. On a graph, looking at any mention of the word in all of literature across the board, it’s pretty much a flat line — until 1920, when it started to uptick and has continued to shoot up and to the right for the past ninety to one hundred years.1

Yet generations before us built countries without goal-setting. Electricity and the lightbulb were invented without bullet journals. New modes of transportation like the locomotive train, and the cross-country tracks that allowed unheard-of travel across the new frontier, were created without New Year’s resolutions. It makes me feel bad for Alexander Hamilton or Mozart — if only they would’ve known about goal-setting.

Here’s the bitter truth: a lot of people have the same goals, but not a lot of people reach them. If you asked an NBA player what his goal was, he would probably say, to win a championship. The winners and losers always have the same goals. But they don’t always have the same systems. When I look back at my old journals, I laugh at how ridiculous and naive and uninformed I used to be. But right after I stop laughing, I’m struck with fear, wondering if I will look back at myself in five years and think the same thing.

That’s how growth as humans works. A few years ago, my goals included:

I’d then set actionable steps to try to achieve each one, usually with a benchmark of my ideal reality. I wanted to eat better so I could have six-pack abs. I wanted to write a book so I could say I was a published author. I wanted to read my Bible every day so I could become a better Christian.

But then I started running into walls.

Most of my goals — especially the big, yearly ones I’d start on New Year’s Day — would last until February, and then I’d completely abandon or forget them. Because the hard truth is, finish lines and end-result motivators do not change us. They usually feel too daunting or too disconnected from our current, everyday lives. And most people don’t thrive under the pressure that we heap on ourselves to hit an exact bull’s-eye, not to mention that we feel ashamed if we miss it.

We need to stop thinking, I’m not that awesome or good enough right now, but if I can just do this one thing, then maybe I’ll feel better about myself. The idea that somehow the achievement of a goal will make us a certain type of person and that it will immediately rid us of our current unhappiness and discontentment just isn’t true.

I’ve begun to understand that we are created for formation, not goal-setting. In general, goals are usually about a finish line. Something you can reach for and then be done once you accomplish it. It’s about doing something.

Formations, on the other hand, aren’t about doing something but about being someone.

One is usually about activity, while the other is about identity. Goals are linear and resemble a straight line. Formations look more like a circle, where you are constantly coming back to the same place to seek renewal and refreshment in a particular practice. One is about a result; the other is about a process.

Some people, when they begin a new hobby, get a huge burst of ambition. Take running, for example. They’ll almost immediately tell themselves, I want to run a 10K or half marathon by this time next year. That’s helpful and great. But I think a better approach is to focus on identity: I want to be someone who runs as a normal part of my life. Or, I will run at least five minutes five days a week.

There’s no finish line. Nothing to really accomplish. Make it more of a practice or way of life that will hopefully stay with you for the next sixty years. Because it’s not about the marathon. It’s about I’m a runner. And the latter to me seems to bring longer, deeper, richer benefits.

And why does this distinction matter so much? I think because Scripture doesn’t talk much about goals. But it is deeply focused on our identity. On who we are becoming.

Are we becoming more like Jesus by the practices and formations we are doing?

Another important difference is the 80 percent rule. If you set goals and only do them 80 percent of the time (like working out, for example), you very quickly feel like a failure. You only think of the 20 percent of the time you didn’t meet your own expectations. But with formations, if you are doing it 80 percent of the time, you can still very much know that the rhythm is changing your quality of life and who you are fundamentally. Why? Because formations are about the process itself. The process is what makes you who you are. If I’m watering our plants five days of the week instead of seven, those are still going to be awesome, healthy plants. Or if Alyssa and I try to have a rhythm of a weekly date night but only seem to do three a month for a season, we know it’s helping and connecting us in ways that are very much necessary.

One is linear and final. One is circular and forever.

One doesn’t really change you. One can transform your life.

It’s a subtle difference, but what’s beautiful about formations is you get both — the process of becoming and probably the achievement or “finish line” too.

Watch the video from Jefferson…

Excerpted with permission from To Hell with the Hustle: Reclaiming Your Life in an Overworked, Overspent, and Overconnected World by Jefferson Bethke, copyright Jefferson Bethke.

What are some areas of your life you want to see change? How could focusing on formations rather than goals help your growth? We’d love to hear your thoughts in the comments!