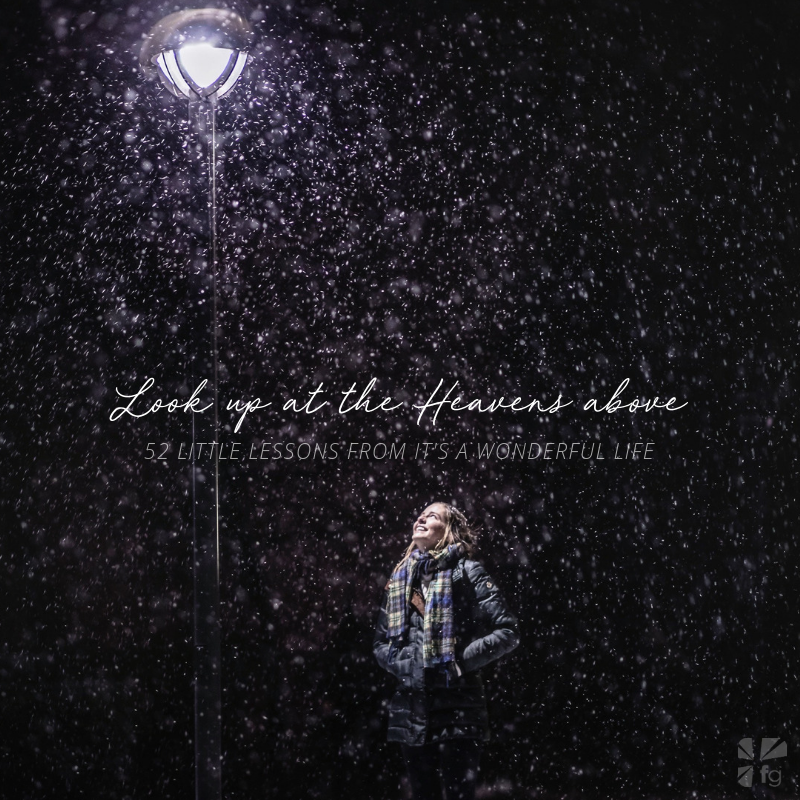 I’m the answer to your prayer. That’s why I was sent down here. — Clarence the Angel, after George tells him “I got a bust in the jaw in answer to a prayer.”

When George Bailey sidles up to Martini’s Bar on Christmas Eve, he’s at the lowest point of his life. In the span of only a few hours, he has:

(a) learned that the Bailey Building and Loan has lost eight thousand dollars just as the state’s bank examiner shows up;

(b) all but threatened to kill Uncle Billy, who has apparently lost the money;

(c) estranged himself from the people he loves most, Mary and the kids;

(d) heard from old man Potter that a warrant is out for his arrest; and

(e) had his desperate plea for a loan turned down by Potter, the man with whom his family has struggled for decades.

Against that backdrop, he’s had enough drinks to cause Martini’s assistant, Nick, to soon ask if he wants a ride home. An obviously concerned Martini will ask why George is drinking so much and encourage him to go home and spend Christmas Eve with his family.

But first, George does something he admits he does not want to do: he prays. “Dear Father in Heaven,” he begins. “I’m not a praying man, but if You’re up there, and You can hear me, show me the way. I’m at the end of my rope. I… Show me the way, God.”

Whereupon a man next to him at the bar, a Mr. Welch (no relation), learns that he is George Bailey and proceeds to coldcock him with a right jab in defense of his wife the schoolteacher, whom George had berated on the phone. As he composes himself after the knockdown, George mutters, “That’s what I get for praying.”

No, what he gets for praying is Clarence — and a new lease on life.

In the movie’s opening scene, the angels Franklin and Joseph are hearing the prayers of townspeople — Mr. Gower, Martini, and Ernie — and family members: George’s mother, Mary, Janie, and Zuzu.

“A lot of people are asking for help for a man named George Bailey,” says Joseph. But it’s clear that the angels have heard the prayers of George, too, and know his muddled mind-set. Franklin knows, for example, that George will be standing on that snow-swept bridge at 10:45 p.m. and “thinking seriously of throwing away God’s greatest gift” — “Oh, dear, dear! His life!” chimes in Clarence. He couldn’t have known that based only on the prayers of the others. And in George and Clarence’s first conversation, as they dry out in the bridge tollhouse, the angel is up front about why he’s come.

“Yeah, I got a bust in the jaw in answer to a prayer a little bit ago.”

Not that George buys into that without some very serious proof on the part of Clarence; he has the doubt gene of the disciple Thomas. But after George is shown life without him having lived it, after nobody recognizes him, after Mary runs away from him and Bert the cop fires shots toward him — he comes to his second moment of desperation, the first, of course, being the bar scene. And what does he do?

And what happens? The snow begins to fall. Zuzu’s petals return to his pocket. And hope returns to the soul of a man who, only a short time earlier, was prepared to commit suicide. That, not the punch from the schoolteacher’s husband, is George’s answer to prayer: the will to live again.

We’ve all been on that bridge of despair at some point in our lives. The answer isn’t looking down at the waters below, but looking up at the heavens above.

Sometimes the answers to our prayers look entirely different from anything we would have expected! Join the conversation and share with us an answer to prayer through a low point in your life that, as it did for George Bailey, may have at first seemed like “a bust in the jaw”. We’d love to hear your stories of God’s faithfulness that came in an unexpected package!