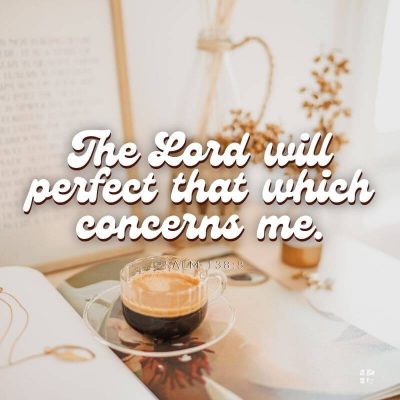 The Lord will perfect that which concerns me. — Psalm 138:8 NKJV

You will easily recognize Peter when you get to Heaven,” the speaker said with a smile. “He’s the man with the foot-shaped mouth.” As the audience laughed, I groaned within. I didn’t think the speaker was worthy to carry Simon Peter’s sandals let alone joke about his sins. A foot-shaped mouth indeed!

Jesus commanded us to forgive our brothers and sisters even if they sinned against us seven times a day, but let a great Bible personality commit the same sin twice (like Abraham), or three times (like Peter), and we can’t forgive them. Instead, we make that sin the key to their character, and this blinds us to the real person. To joke about sin is to minimize it, and sin is not a laughing matter. Sin put Jesus on the cross. Peter wept over his sins, but we who are more mature joke about them. As for our own sins, well, that’s another matter.

The speaker had fallen into the same trap that has snared far too many Christians: they don’t know the true Bible personality, so they accept a cheap caricature instead. They enjoy emphasizing the occasional bad things. Peter had a big mouth and often put his foot into it. Noah got drunk, and Abraham told the same lie twice. David was a voyeur, Thomas was a doubter, and John Mark was a quitter. Forget all the good things these people did and ignore what the Lord said about them. No matter what the truth is, keep the congregations laughing. Stick to the caricature.

The fact that Simon Peter had two names helps us get a better perspective on his character as well as our own. Simon was his given name — “the hearer”; Peter was his nickname — “a rock.” Jesus had less than three years to transform this lump of clay into a rock — and He did it! All believers have two names: the old name, “child of Adam,” and the new name, “child of God.” Years ago, many Christians wore colorful pins with PBP/GINFWMY printed on them. If anybody asked what those letters stood for, the explanation was given: “Please be patient, God is not finished with me yet.”

Peter could have worn one of those pins without embarrassment. That’s why I selected Psalm 138:8 for Peter’s defining verse: “The Lord will perfect that which concerns me” (NKJV). It’s the Old Testament equivalent of Philippians 1:6:

Being confident of this, that He who began a good work in you will carry it on to completion until the day of Christ Jesus.

Both verses have encouraged me when I have messed up my assignment and disappointed my Lord. The victorious Christian life is a series of new beginnings. Each time Peter stumbled, Jesus forgave him and Peter got up and made a new beginning.

We usually associate love with the quiet and poetic apostle John and not with impetuous and manly Peter, “the big fisherman,” but Peter needed to grow in love as well as in knowledge and faith. In fact, Peter’s love for Jesus was the theme of our Lord’s breakfast meeting with seven of His disciples after the resurrection (John 21) .

In the upper room, Peter had boasted of his love for Jesus.

In all fairness, we should note that the other men echoed Peter’s words, but it seems that Peter was the most outspoken. So, after breakfast, Jesus asked Peter the most penetrating question He had ever asked him:

Peter told the truth: he did love Jesus, and he wasn’t going to deny it. Yes, he had failed, but Jesus had forgiven him and was now about to restore him to his ministry. Peter was learning the lesson John wrote about years later:

Dear children, let us not love with words or tongue but with actions and in truth. — 1 John 3:18

Making a passionate speech and wielding a sword were not valid evidences of his love, but staying awake and praying with and for Jesus would have qualified.

We don’t need pictures or statues of Jesus in order to love Him, because we have the inspired portrait we need already written in Scripture. The old hymn expresses it perfectly:

Break Thou the bread of life, Dear Lord, to me,

As Thou didst break the loaves beside the sea;

Beyond the sacred page I seek Thee, Lord;
My spirit pants for Thee, O living Word.

Those who spend time daily in the Word, meditating on what it says about Jesus Christ, will grow in their love for Him and prove it by the way they live and serve.

Becoming like Jesus, after all, is the goal of the Christian life and the purpose behind God’s great plan of salvation, for we have been “predestined to be conformed to the likeness of his Son” (Romans 8:29). It isn’t enough for us to grow in the knowledge of Christ; we must also “grow in grace” (2 Peter 3:18) and become more like Christ. It is very easy to grow in “Bible knowledge” and yet never manifest the grace of Jesus Christ in our lives. It is easier to preach about humility than to practice it, or to study the Greek words for love than to love one another.

If you want to see Simon, the clay, living like Peter, the rock, follow Peter’s ministry in the book of Acts. You will meet a man of prayer, a man obedient to the Word, a man who magnifies Christ in his preaching, and a man of compassion who cares for saints and lost sinners. He rejoices at the privilege of suffering for Jesus. He steps aside and allows James to lead the Jerusalem church. He makes sure the widows are cared for, and he opens doors of service for qualified believers in the church. He abandons his Jewish practices, goes to the home of Cornelius, and preaches the gospel to the Gentiles. He is called on the carpet by the legalists, but he doesn’t retreat. When the church leaders meet in Jerusalem to discuss the place of the Gentiles in the plan of God, Peter stands with Paul and Barnabas defending the freedom of the gospel (Acts 15:1-11). Praise God! A Gentile doesn’t have to become a Jew in order to become a Christian!

The better we know Jesus, the more we trust and love Him. This combination of spiritual knowledge, faith, and love, combined with God’s grace, enables us to become more and more like Jesus! Peter called it growing in the grace and knowledge of Jesus (2 Peter 3:18), and Paul called it “perfecting holiness out of reverence for God” (2 Corinthians 7:1) .

How did the Simon of the Gospels become the “rock” of the book of Acts? Of course, the Lord had prayed for Peter, taught him, and given him many opportunities to learn and grow, but there were three events in Jerusalem that opened the door to Peter’s life of fullness and fruitfulness.

Let’s begin with the crowing of the cock and remember that when it happened, Jesus “turned and looked straight at Peter” (Luke 22:61). It wasn’t the angry scowl of a judge but the pained look of a friend whose heart had been broken. At that moment, Peter saw himself and realized what he had done to Jesus, and then he went out and wept bitterly. For each of us, there must come an hour of honest confrontation with our true self and humble confession of our sins to the Lord.

The second event was the crucifixion of the Savior. Peter saw a part of the official trial of Jesus, but he didn’t see it all, nor did he go to the cross as John and the women did. However, Peter knew what crucifixion was and the shame and suffering his Master would endure. Peter’s words must have seared his heart:

But it was Simon of Cyrene who carried the cross for Jesus, not Simon Peter. Christ died our death for us that we might live His life for Him.

And He died for all, that those who live should no longer live for themselves but for Him who died for them and was raised again. — 2 Corinthians 5:15

Event number three was the coming of the Holy Spirit. Jesus told the apostles to stay in Jerusalem until they had been “clothed with power from on high” (Luke 24:49), and on the day of Pentecost, that promise was fulfilled. In the power of the Spirit, Peter boldly preached the gospel and 3,000 people were saved. He performed miracles of healing, he exposed the works of the Devil, he confronted his opponents and shut their mouths, and he brought great glory to the name of Jesus. He gave direction to the church and strengthened the saints when persecution began. He was a different man.

We, too, can become different people. God never gives up on us even though we may decide to give up on ourselves. The moment you were born again, Jesus said, “You are — you shall be!”

We are nothing but lumps of clay, but Jesus can turn us into rocks.

The eminent Greek scholar A. T. Robertson wrote about Peter: “It was slow in coming, but when the fruit was ripe, it was rich and gracious. He was a man worth the making and Jesus knew it. He loved Peter from the start, and to the end.”2

Don’t wait for the crowing of the cock, but start right now to claim Peter’s defining verse: “The Lord will perfect that which concerns me.”

Part of why so many of us love Peter is because he is so like us: fallible. He loved Jesus with all of his heart. He was brave. He stepped out on the water. And, he failed. He chickened out when it mattered. He was… human like us. And, Jesus chose him. Like He chooses us. As Jesus continued to perfect Peter, He continues to perfect us. PBP/GINFWMY! Come share your thoughts with us. We want to hear from you! ~ Devotionals Daily