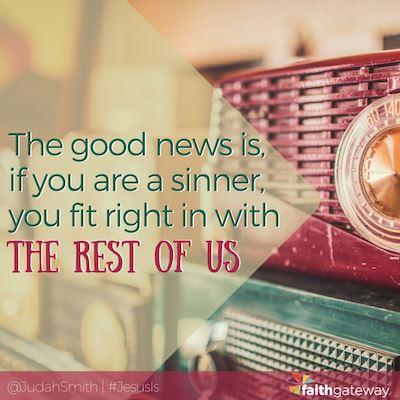 Editor’s Note: Today’s blog features an excerpt from The Jesus Is _______ Student Edition by popular speaker, author, and pastor Judah Smith.  Adapted from his New York Times bestselling book for adults, this compelling student edition will get younger readers thinking about what Jesus means to them and help them understand the character of Jesus. This book makes a great Bible study for tween and teenage readers! Here’s a selection…

If you have a brother or sister who is in the toddler stage, you already know sin in real. And it wears diapers.

How can something so cute get so mad and so loud? In the mall? When your friends are watching? Obviously, no one had to teach us to be selfish, ungrateful, and angry.

That’s the factory default. We are born with a tendency to sin, which the Bible calls a sinful nature. Lots of sincere people have tried to explain away sin, but the fact remains, there are evil people out there. All it takes is for someone to hit your mama and you know there is sin in the world. Even “good” people do a lot of evil things.

Sin is all over the place. It’s in me and it’s in you. God created Adam and Eve, the first man and the first woman, with a free will because he did not want a relationship with a bunch of robots. He wanted us to be able to make our own choices. He knew that forced love is not love at all. So, God gave us the ability within ourselves to choose Him or reject Him.

Adam and Eve rejected God, and now throughout the ages, humans are born with a tendency to reject God and go their own way. That break from God’s original plan is the root of all sin. So right and wrong exist.

not being moral nor immoral for example, a stone, a chair, or a stone chair may be considered amoral

Most of life is that way, actually. As long as we handle them properly, amoral areas can add to our joy and success. Money, for example, is amoral. Cars are amoral. Sports are amoral, except for maybe cricket — any game that takes five days to play must be sin. Apologies to my friends in England who play cricket for days on end. I’d rather finish the game sooner and get to the snacks.

There are also things that are wrong in certain cases, but not in others. In that sense, right and wrong can change. In Singapore, for instance, it’s basically a crime to chew gum. But here in Seattle, we have a city landmark called the Gum Wall. It’s down by Pike’s Market, and people from all over the world, including probably Singapore, come and stick their nasty gum wad to a wall in an alley. It is the most disgusting thing you could imagine. But it’s not sin. I wish it were, but it’s not.

Things That Gross Me Out

1. Sharing a toothbrush with someone else.

4. Shaking hands with someone who just licked his fingers.

5. Getting sneezed on from behind. Or from any angle, actually.

6. Having someone in front of you spit out of the car window. (It never works, people. Swallow it.)

The best definition I’ve heard for sin is “missing the target.” There is a target: a goal, a standard, a mark. God established it. And we have all missed it.

There is nothing gray about it. Sin is sin. Wrong is wrong. No matter how we spit it, no matter what we call it, we have all sinned, and we continue to sin more often than we’d like to admit.

The first mention of sin in the Bible is in Genesis 4:7. Cain is angry with his brother, Abel, and God warns him not to give in to sin.

If you refuse to do what is right, then watch out! Sin is crouching at the door, eager to control you. But you must subdue it and be its master.

If you’ve heard the story, you know that Cain didn’t subdue, or control, his sin. Not even close. He went out and killed his brother. It was the first murder in human history. Ruling over sin is a nice idea, but the human race has never been very good at it. The Bible tells us time and time again that we are all sinners.

For everyone has sinned; we all fall short of God’s glorious standard.

No one is righteous — not even one.

To be righteous means you’re in right standing with God. To be righteous means you can stand shoulder to shoulder with God because you are right and are sinless and you are perfect. The Bible says there is not even one person like that. We can try to be righteous. And I supposed we all do. We help an elderly lady cross the street, we open the door for somebody, we give five bucks to a homeless guy on the street corner. We do good things to try to fill the space inside that keeps telling us something’s wrong.

But, in our do-goodism, in all the hours we work on our homework, in all our efforts to be good friends, or sons, or daughters, or brothers, or sisters, something is still wrong. The passage I quotes out of Ephesians says that we were dead in our sins. In other words, life under sin is not life at all. It’s death. No matter how many afternoons we spend wakeboarding on the lake or how many gadgets and electronic devices we have in our room, if we are ruled by sin, we aren’t alive. We’re all card-carrying members of the walking dead.

We have our moments, we do our best, but we’re still not experiencing true life.

Can life in sin be called living? Not really. Sure, we’re breathing. Sin will let us breathe for a while — but it will never let us truly live. That’s how sin works.

So, I’ve got good news and bad news.

The bad news is, we are all sinners.

The good news is, if you are a sinner, you fit right in with the rest of us. [tweet this]

So, where do we go? What do we do? Can we find a man or a woman we can nominate and vote into office who can solve the sin problem? Can we pass some powerful laws that will set humanity free from the sin problem? Is that our answer?

The apostle Paul wrote the book of Ephesians in the Bible. Before he got to know God, Paul was not a good man. He thought he was a good man because he was a religious fanatic. In the name of religion, he barged into people’s homes and dragged them off to jail because they didn’t believe what he did. He was mean. He was an accomplice to murder. And he was pretty impressed with himself.

Then God got a hold of his life, and everything changed. He ended up writing nearly half the books of the New Testament. Yet, even after becoming one of the greatest spiritual leaders in the history of the Church, he still lost the battle against sin from time to time (see Romans 7:24).

Jesus is the only man who has ever truly lived, because sin had no hold on Him. It’s sin that sucks the life out of our existence. Jesus showed up on the planet overflowing with life because He knew no sin. Sure, He was tempted, but He resisted all temptation, and He lived for thirty-three years without sin.

Because He was the only person who every truly lived, He is the only one who could solve the sin problem once and for all.

He made a way for us to really live.

What grosses you out? Have you given your sin and your life to Jesus and asked Him to be your Savior? Come join the conversation on our blog. We want to hear all about it!