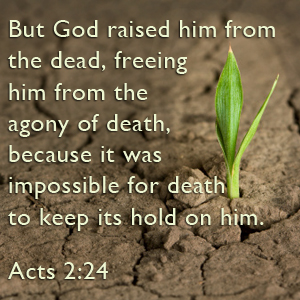 The resurrection of Jesus from the dead is so foundational to Christianity that no one who denies it can be a true Christian.

Without resurrection there is no Christian faith, no salvation, and no hope. “If there is no resurrection of the dead,” Paul explained, “then Christ is not risen. And if Christ is not risen, then our preaching is empty and your faith is also empty” (1 Corinthians 15:13-14). A person who believes in a Christ who was not raised believes in a powerless Christ, a dead Christ. If Christ did not rise from the dead, then no redemption was accomplished at the cross. “Your faith is futile; you are still in your sins!” (1 Corinthians 15:17).

It is hardly surprising, therefore, that the first sermon on the day the church was born focused on the resurrection of Christ. After charging his hearers with Jesus’ death, Peter declared,

Whom God raised up, having loosed the pains of death, because it was not possible that He should be held by it. – Acts 2:24

The resurrection stands as a central theme in Paul’s epistles as well. He declared that Christ “was buried, and that He rose again the third day according to the Scriptures” (1 Corinthians 15:4).

Salvation belongs only to those who believe in the resurrection of Jesus Christ, who confess Him as Lord and Savior, and who thereby identify themselves with Him.

How often do you think about the resurrection of Jesus? He died and rose again for us! Hallelujah! Join us today in meditating on the biggest turning-point in history and in our personal lives as Christians. Share your thoughts with us! We’d love to hear your comments on our blog! ~ Devotionals Daily