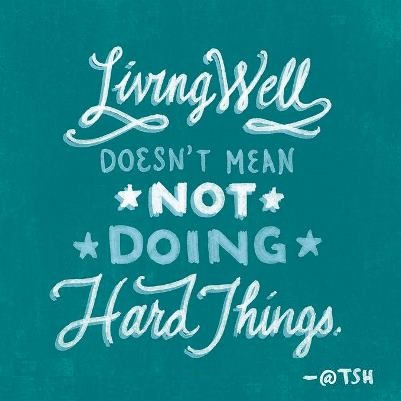 I distinctly remember the moment, watching snow flurries fall against a red-brick backdrop out of a coffee-shop window in Oregon, I realized that unless our family made more intentional, proactive choices, instead of just constantly talking about wishing things weren’t so busy, we would go on forever wanting a different life. And I realized that as challenging as it was to live as an expat, I was craving our life back overseas.

But why? Life in Turkey was hard. Why would I want to live in tension with the fear of unexpected visitors dropping by and making comments about the cleanliness of our home? How could I actually long for a lack of pork products and cheese variety? I was riddled with crippling depression there; here in my native culture, I had at least found ways to thrive free from my mental and emotional obstacles.

So it’s an unoriginal answer, but here’s what happened: My epiphany came during prayer.

In that coffee shop, I took a deep breath and chose to turn my expletives into a conversation with God, telling him how much I hated this winter that lasted seven months in a town where we had no family and few friends. In Austin, at least we’d had delectable Tex-Mex; we could drown our sorrows in queso. And we had flip-flop weather by March. We had come to this small town with a hope of finding a slower-paced life. Why were we still living what felt like other people’s lives—a busyness we never wanted, a lack of community, and a low-grade sensation that we were still foreign? (A lack of appropriate salsa and more snow than is preferred are obvious first-world problems, admittedly, but in that moment, in that coffee shop, they were real.)

We weren’t living the way we wanted because we weren’t making the choices it required. 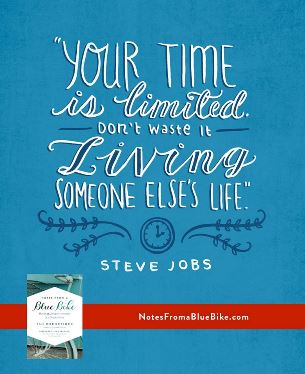 Like so many in our generation of thirtysomething parents, we spoke of a slower, more intentional life, but we expected it to just happen. The only decisions we had made in the past year were to move to a small town and start a new job. Big decisions, yes, but nothing else was different about how we lived day to day.

Once I heard the answer to my prayer, it was embarrassingly obvious: to live intentionally, we had to make intentional choices.

And if we really wanted to live slower, as we had in the relationship-based culture of Turkey, it would mean living contrary to what the American culture surrounding us declared was normal. It would be hard, but living well doesn’t mean not doing hard things.

Then I discovered I had friends who felt similarly.

They had never lived in a slower-paced culture like Turkey, and yet they desired a pace and quality of life similar to what we did. They were fellow parents with small children who also worked from home as entrepreneurs, and they, too, felt hurried and stressed—and they lived in an even smaller town than Bend. Perhaps what my husband and I were craving was a bit more universally desired than I realized. Maybe?

Perhaps none of us were actually made to live a hurried life. Perhaps a desire to live slowly and intentionally resonated deeply in the core DNA of just about all of us.

I connected more dots as I interacted with my blog’s readers: almost everybody in my life stage—parents with kids at home—craved a slower life. They, too, craved a more meaningful life, a life that made margin for doing nothing, for not bowing down to calendars, for saying yes to long walks with their kids and cooking seasonally from scratch because there was time. With few exceptions, we all wanted the same things. Living overseas doesn’t breed this yearning: it bubbles deep down, innately in our souls. As though we were somehow made for a slower life.

One thing was apparent: going with the flow and living like everyone else does not automatically guarantee a slower life.

My nudge from God was true; living slower requires living with intention. And to live with intention means to make little daily choices that resonate deeply in our souls—that make sense deep in our being and ring true.

I made another list. (I’m a fan of lists.) But this time, instead of forcing Turkish mores onto American life, I sliced into wedges the pie that composed the sum of our life, and I jotted down what it would look like if each one were better savored. These five slices represented the major categories of our family’s daily decisions.

I sighed and put down my pen, then looked at my list. I was finally satisfied—this embodied all that we were wanting. This was life intentional.

But I was also keenly aware of this: these were significant slices of pie, and if slowing down enough to savor all of them meant a richer life, it would require our family’s attention, energy, and collaborative effort. We can’t just eliminate Costco runs and parent- teacher conferences in our American life; so instead, we’d take our rich experiences from life in another culture and redefine them into gifts to open here in the Western world. We would take the beauty of life in a slow, relationship-based culture, and mold it into something beautiful and useful in our native culture, where the prevailing mark of a good day is getting a lot done. We would ask questions like, “Can we live effectively in the US without productivity as our primary goal?” and “Is it even possible for us to live slowly in America, or is this wishful thinking?” We may not like the answers we find, but we’d give it our best shot to find out.

We were made to live slower than our fast-paced Western culture deems normal. But it means paddling upstream through strong currents.

Watch the Video – Notes from a Blue Bike

Announcing our LIVE Chat with Tsh!

Ask Tsh YOUR questions about living intentionally and slowing down from the American pace of life in this exclusive live author chat on Thursday, March 20th at 9:00 pm EST. You can tweet your questions to Tsh during the chat using hashtag #notesfromabluebike and she will answer them LIVE on the air during the hangout! 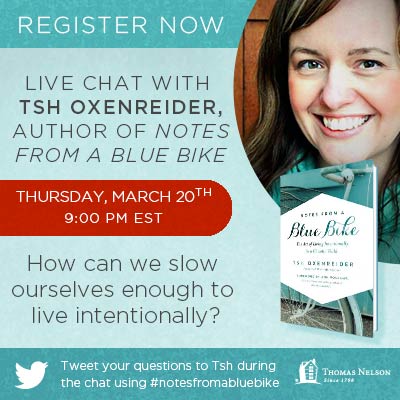 Which of the five pieces of the pie above do you crave most when it comes to crafting a more intentional family? 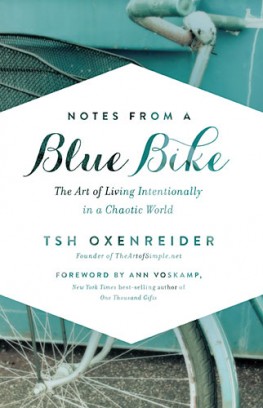