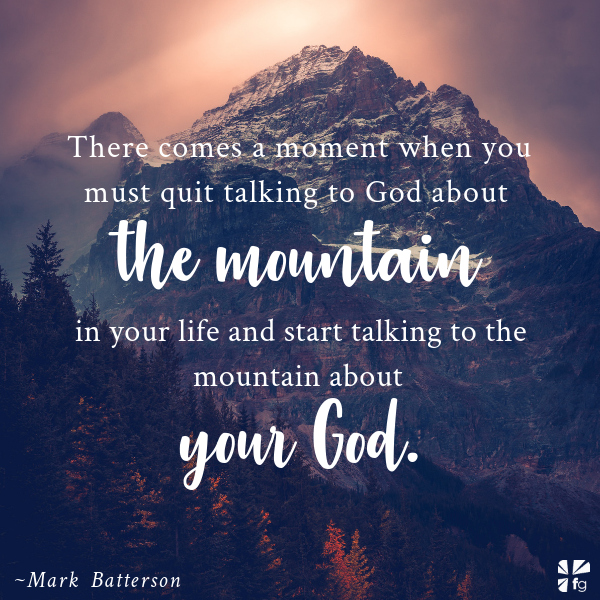 Speak to the Mountain

There comes a moment when you must quit talking to God about the mountain in your life and start talking to the mountain about your God. You proclaim His power. You declare His sovereignty. You affirm His faithfulness. You stand on His Word. You cling to His promises.

Goliath held an entire army captive through fear. His weapon was intimidation. And that is how our enemy operates. He prowls around like a roaring lion. 1 But the important word is like He’s an imposter Jesus is the Lion of the tribe of Judah. 2 And when he roars, everything is shaken. All authority under heaven and on earth is His. And we are His children. Why don’t we live like it, love like it, give like it, serve like it, and pray like it?

If God is for us, who can be against us?3 The One who is in you is greater than the one who is in the world.

I can do all things through Christ who strengthens me. 5 In all things God works for the good of those who love Him, who have been called according to His purpose.6

What did Jesus do when Satan tempted Him in the wilderness? He fell back on the Word of God He used it like a skilled swordsman. And He wasn’t just defending Himself; He was delivering blows by citing chapter and verse!

It’s time to claim the victory that has already been won at Calvary We are not conquerors; we are more than conquerors through Christ.

Jesus proclaimed the victory when He said,

I will build My church, and the gates of Hades shall not prevail against it.7

Second, it says that the gates of Hades will not prevail Gates are defensive measures, which means, by definition, that the Church is on the offense. It’s high time for an all-out attack on the enemy! The battlefield is the prayer closet. And secret prayer is our secret weapon.

When we hit our knees, we pick a fight with the enemy. We are immediately transported to the front lines of the Kingdom, where we wage war with principalities and powers. That is where the battle is won or lost — on our knees! And when we hit our knees, God fights our battles for us.

When we purchased the crack house that we turned into our coffeehouse on Capitol Hill, it took two miracles. The first miracle was getting the property; the second was getting it rezoned from residential to commercial.

For eighteen months, we met with everybody from the Historic Preservation Office to the Office of Planning to the Capitol Hill Restoration Society. We had overwhelming community backing. After all, we were investing $3 million to turn a crack house into a coffeehouse. But during the rezoning process, some influential neighbors decided to oppose our rezoning efforts because of misinformation about what we planned to do. I followed a link to a website where they were slandering our motives. To be honest, I was so upset I was ready for a throwdown! Their opposition had the potential to short-circuit our dream of building a coffeehouse, and I got angrier every time I thought about it. That’s when I discovered the power of praying circles around the pharaohs in your life. And for the record,

there will always be pharaohs who get in the way of what God wants to do in your life.

All of us have impossible people in our lives. All we can do is circle them in prayer. It’s the only way to keep our attitude in check. And prayer has the power to change the heart of Pharaoh. So every time I got angry, I converted it into a prayer. I think it’s the closest I’ve ever come to praying without ceasing because I was angry all the time.

I prayed for those neighbors for several months leading up to our hearing before the zoning commission I’ll never forget the feeling as we walked into the hearing room and sat down at our tables on either side of the aisle. I had absolutely no animosity toward the people who were opposing us. I felt an unexplainable compassion for the people who opposed us, and I wasn’t worried about what they said or did because I had circled them in prayer. I had also circled the zoning commissioners. Not only did we win unanimous approval from the zoning commission, which is a testament to God’s favor, but one of our opponents is now a regular customer at our coffeehouse!

The two-year ordeal of rezoning was emotionally and spiritually exhausting, but that is how to increase spiritual endurance. When it was all over, I thanked God for the opposition we encountered because it galvanized our resolve and unified our church. I learned that we don’t have to be afraid of the enemy’s attacks. These attacks are counterproductive when we counteract them with prayer. The more opposition we experience, the harder we have to pray. And the harder we have to pray, the more miracles God does.

Learn how to use the Bullet Journal in this video tutorial

What mountain are you facing? What is the insurmountable problem in your path? Quit playing defense and start playing offense. Fight back with the Word of God and prayer! Come share your thoughts with us on our blog. We want to hear who’s bigger: your problem or Jesus!