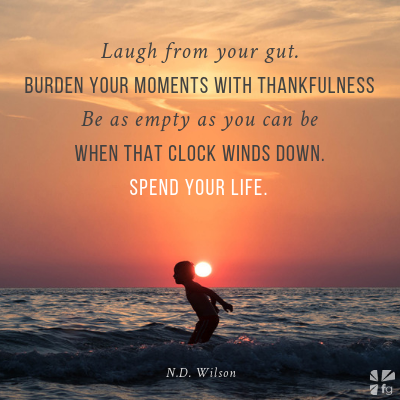 On Saturday nights, our family gathers at my parents’ house to eat and laugh and drink to grace. My sisters and their husbands come with their tribes and I with mine.

My grandmother, mother to my father, went into the ground on top of a hill two years ago. James Irwin Wilson comes to these Saturday dinners alone (and yet not). He is the one most likely to ask if he can invite an ex-convict, or to need a ride because he loaned his car (knowingly) to a thief, and now it is gone. His heart struggles. His blood struggles. The man who rowed at the Naval Academy now walks with a cane. The boy who was there when a stallion was rearing and his father was falling to the ground, the boy who ran a ten-acre farm and finished high school and worked eight-hour shifts every night in the Omaha stockyard is now eighty-five and not yet spent. Though he is trying to be. My grandfather has no intention of ending his life with closed fists. His hands will be open and they will be empty.

I began meeting with him early on those Saturday afternoons, and I set up a camera. He was uncomfortable that first time, because I was demanding that he talk about himself, and because he had forgotten to wear a tie. I laughed (in my sweater and jeans). He hasn’t forgotten his tie since.

When he turned eighty-five, he asked for no presents. Like a good hobbit (though I have always said that he is more entish), he wanted to give to us. He is not in the business of accumulating, especially now, as he hears the crowd counting down. He had some birthday menu requests (with pie for dessert), and then he wanted to tell stories to his great grandchildren.

That Saturday, aunts and uncles and cousins came, and when we had eaten and sung and laughed, we settled him in an armchair and sixteen great-grandchildren wrapped around his feet on the floor.

He had no doodads to give. No cheap party favors. Instead, he gave those kids what they could never buy for themselves, what they could never find on their own. He gave them the memories of a boy on a Nebraska farm with brothers, a boy trying to break a wild prairie mustang. He gave them memories of his mother, born in a sod dugout in the prairie grass. He gave a crowd of mostly small people (who all exist because of his choices in his moments) a glimpse at a time long gone, at moments extinct, at vapor seen with his eyes and remembered.

I — and all of those children — reap a tremendous daily harvest thanks to his faithfulness, thanks to the man with the cane who has received his life with joy, and whose large hands have always been open. Thanks to the Author who crafted such a character and set him on his path, who claimed his heart and carried his burden.

For my part, as he sat and talked, I held a camera. A time will come, I pray, when I am the spent one in the chair still aiming to give. And if I reach his age in 2063, I hope, even then, to introduce this man to generations unborn, to give them more than words, but the flickering image of this face, and the sound of this voice.

On his birthday, this grandfather is not yet done. He has more wealth to give. He chose a passage of Scripture for each of his children and their spouses, for each of their children and their spouses, and for each of their children. Forty-six souls (and counting). He asked a son to arrange and print each passage on archive paper, and he wrote a note of marginalia to each of us, in the sharp, perfect handwriting of another time.

To the youngest of all, my sister’s two-month-old son, he hand-wrote a simple message next to Colossians 1:9-12: “You may not remember me. I remember you and prayed for you when you were one day old. — Great Grandpa”

My grandfather’s accounts are in order. His seed is sown. His hoard is elsewhere, in the faces at his feet, and in the hundreds and thousands of stories his own story has touched and will continue to shape.

Drink your wine. Laugh from your gut. Burden your moments with thankfulness. Be as empty as you can be when that clock winds down. Spend your life. And if time is a river, may you leave a wake.

Who in your family inspires you to spend your life for others? Who do you see faithfully loving others in a way that you want to love others. Share your thoughts and leave a comment on our blog! We want to hear from you!