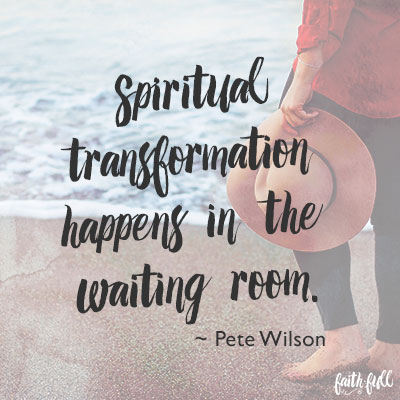 God often uses waiting as a crucible in which to refine our character. Perhaps the prophet Isaiah realized this when he wrote,

They that wait upon the lord shall renew their strength; they shall mount up with wings as eagles; they shall run, and not be weary; and they shall walk, and not faint. — Isaiah 40:31

Faithful waiting on God makes us stronger, not weaker.

Waiting is also a sign of humility. Remember that, long ago, persons of lesser rank who served nobility and royalty were said to “wait upon” them. In a similar way, they were said to “attend” their lords and rulers. Even today, the French word for “wait” is “attend.” Maybe there is something to learn here. Maybe we should think of waiting on God less as passively sitting around until something happens and more as actively attending — listening carefully for God’s voice and watching intently for evidence of His moving in our lives and in the world around us.

Now, believe me, I understand that those of you reading these words who are in the midst of waiting for a miracle or waiting for a dream to be realized or waiting to be delivered from a dark, scary place probably feel helpless. You feel as if you’re doing nothing, but you’re actually doing something very important. In fact, this waiting — this attending to God — may be the most important spiritual work you could possibly do. While you are waiting faithfully on God, you are also allowing your hope to grow up. And if you can’t be still and wait and hope — even when you have no reason to hope — you can’t become the person God created when He thought you into existence.

Waiting also helps us learn the vital lesson that just because a dream is delayed doesn’t mean it is denied. When we continue to hope patiently and place our trust in God and in His schedule — not ours — we begin to gain the type of long-range perspective that allows us to have peaceful souls, even when the storms of life are raging about us. With God, we can wait out the storm and see the sun breaking through the clouds. When we trust in Him, we will eventually see the rainbow and the rebirth of our hopes and dreams.

As we wait, we can take great comfort in the knowledge that God doesn’t ask us to do anything He hasn’t already done. God has, in fact, field-tested waiting and given us the perfect example to follow in Jesus Christ.

Henri Nouwen, in A Spirituality of Waiting, makes this point beautifully. He tells the story of being called to the bedside of a friend who had spent his life as a social activist, busily involved with caring for others. But now, this human dynamo was confined to a sickbed by the cancer ravaging his body. He confessed to Nouwen that he had no way to even think about his life. His entire self-identity had always been framed by doing, by actively working on behalf of others. How, he wanted to know, could he understand his present circumstances in a way that didn’t lead to despair?

Nouwen wisely answered this anguished question by pointing his friend to the last days of Jesus’ life — the period Christians often refer to as Christ’s Passion. Up until this point in His life, Jesus’ ministry had consisted largely of doing: healing, teaching, confronting, comforting, and actively modeling the God-life for all those He met. But when He was arrested by the Temple police, He was forced into a time of waiting. Nouwen wrote:

The central word in the story of Jesus’ arrest is one I never thought much about. It is “to be handed over.”… Some translations say that Jesus was “betrayed,” but the Greek says He was “handed over.” Judas handed Jesus over (see Mark 14:10). But the remarkable thing is that the same word is used not only for Judas but also for God. God did not spare Jesus, but handed Him over to benefit us all (see Romans 8:32)…

In other words, even Jesus, God-in-the-flesh, had to endure waiting in order to fulfill His greatest purpose. In the same way, as we wait in faith upon God, we become more like Christ in His perfect obedience, His perfect sacrifice.

The apostle Paul underlined this truth when he said, in Philippians 3:10-11,

I want to know Christ — yes, to know the power of His resurrection and participation in His sufferings, becoming like Him in His death, and so, somehow, attaining to the resurrection from the dead.

Paul knew there was no shortcut to resurrection. If Christ had to pass through the gate of suffering in order to arrive at resurrection, then Paul wanted to walk the same path.

So life isn’t turning out exactly the way you thought, and you have laid it before God in prayer, over and over again. You’ve taken the steps you know to take and prepared yourself to the best of your ability — and it still isn’t happening.

Is it time to move on? Is failure inevitable? And if it is, how much longer should you keep prolonging the obvious?

My bias is that, most of the time, we give up too soon. I prefer to help people see all the possibilities God may be placing before them. I am always hesitant to place time limits on God. The important thing is to continue trusting the end result to God, even when the outcomes you want are not immediately apparent.

Remember that faithful waiting — attending — involves much more than passively sticking your hands up in the air until God rains blessings down into your palms. Faithful waiting involves actively seeking contentment, even amid less-than-optimal circumstances.

Can you listen for God’s guidance, even when things aren’t going your way? Can you proactively trust Him, even when you aren’t seeing the evidence of the victory you long for?

I encourage you to keep doing the next right thing, taking the steps you know to take, without getting frustrated because you aren’t yet where you want to be. Act on the belief that God has a plan and that He is bringing it to completion in your life. Commit to being ready for that completion to occur, even if you can’t see it coming.

God has done mighty things in your life, and He will continue to do them, if you trust Him.

In every life, there are times of great forward motion, and there are times of waiting. Just as Christ, after acting so vigorously for much of His ministry, had to endure the agonizing wait of the Passion, so we must recognize and conform ourselves to the holy rhythm of waiting on God’s timing. And who knows? It could be that you are only three days away from the resurrection.

Excerpted with permission from What Keeps You Up at Night by Pete Wilson, copyright Thomas Nelson.

Think of a time in your life when you were “in the waiting room.” What have you learned since that experience? Maybe you’re in the waiting room right now. I’ve been there many times. One season of waiting for the Lord to bring relief and healing lasted more than fifteen years. I thought I was going to die from waiting and I began to doubt that God even remembered me anymore. But, He did. He intervened and rescued me and I’ll never be the same again. What about you? In your waiting room, are you believing that He is and will continue to do mighty things in your life? This won’t last forever. Even if it feels like it right now. Come share your story with us on our blog. We want to hear from you. ~ Laurie McClure, Faith.Full