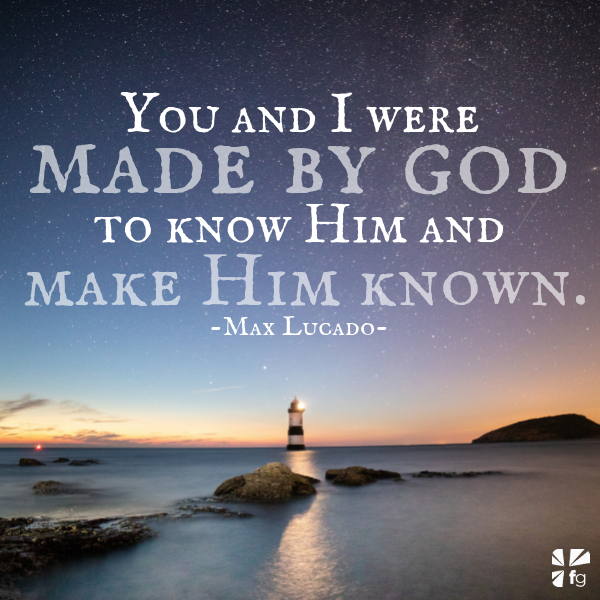 Editor’s note: It’s Sit & Listen Saturday at Devotionals Daily! We hope you enjoy reading as well as listening to this devotion from Unshakable Hope, the newest book from Max Lucado. You can listen on our blog or on your Alexa device. Alexa users, simply enable the “Devotionals” skill and prompt, “Alexa, ask Devotionals to read me today’s devotion.”

Let us make human beings in our image, make them reflecting our nature. — Genesis 1:26 The Message

Sometime ago I videotaped a message for our church. We recruited a film crew and drove to the Alamo. We selected a park bench in front of the shrine of Texas liberty, set up the equipment, and got busy.

Four workers managed sight and sound with lights and cameras. I sat on the bench, trying to remember my thoughts. We must have looked official. Passersby began to pause; some started to stare. Who is that guy? What are they filming?

One woman’s curiosity erupted into a question that she shouted at me from behind the crew. “Are you somebody important?”

Every soul on earth has asked the same question. Not about a red-head on a park bench, mind you, but about themselves.

Am I somebody important?

It’s easy to feel anything but important when the corporation sees you as a number, the boyfriend treats you like cattle, your ex takes your energy, or old age takes your dignity. Somebody important? Hardly.

When you struggle with that question, remember this promise of God: you were created by God, in God’s image, for God’s glory.

Let Us make human beings in Our image, make them reflecting Our nature so they can be responsible for the fish in the sea, the birds in the air, the cattle, and, yes, Earth itself, and every animal that moves on the face of Earth. — Genesis 1:26 The Message

Embedded in these words is the most wonderful of promises: God made us to reflect the image of God.

God created us to be more like Him than anything else He made. He never declared, “Let us make oceans in our image” or “birds in our likeness.” The heavens above reflect the glory of God, but they are not made in the image of God. Yet we are.

To be clear: no one is a god except in his or her own delusion. But everyone carries some of the communicable attributes of God. Wisdom. Love. Grace. Kindness. A longing for eternity. These are just some of the attributes that set us apart from the farm animal and suggest that we bear the fingerprints of the Divine Maker. We are made in His image and in His likeness.

Seth bore the image and likeness of his father. Maybe he had his father’s curly hair or dark eyes. Apart from having a belly button, Seth was like Adam in many ways.

Sin has distorted this image, but it has not destroyed it. Our moral purity has been tainted. Our intellect is polluted by foolish ideas. We have fallen prey to the elixir of self-promotion rather than God- promotion. The image of God is sometimes difficult to discern. But do not think for a moment that God has rescinded His promise or altered His plan. He still creates people in His image to bear His likeness and reflect His glory.

The New Testament describes a progressive work of God to shape us into His image. As we fellowship with God, read His Word, obey His commands, and seek to understand and reflect His character, something wonderful emerges. Or, better stated, Someone wonderful emerges. God comes out of us. We say things God would say. We do things God would do. We forgive, we share, and we love. It is as if God is scrubbing the smudge off an old coin. In time an image begins to appear.

God’s goal is simply this: to rub away anything that is not of Him so the inborn image of God can be seen in us.

This was God’s explanation through the apostle Paul.

You have taken off your old self with its practices and have put on the new self, which is being renewed in knowledge in the image of its Creator. — Colossians 3:9-10

We… are being transformed into His image with ever-increasing glory, which comes from the Lord, who is the Spirit. — 2 Corinthians 3:18

Pop psychology is wrong when it tells you to look inside yourself and find your value. The magazines are wrong when they suggest you are only as good as you are thin, muscular, pimple-free, or perfumed. The movies mislead you when they imply that your value increases as your stamina, intelligence, or net worth grows. Religious leaders lie when they urge you to grade your significance according to your church attendance, self-discipline, or spirituality.

According to the Bible you are good simply because God made you in His image. Period.

He cherishes you because you bear a resemblance to Him. And you will only be satisfied when you engage in your role as an image bearer of God. Such was the view of King David:

As for me, I will see Your face in righteousness; I shall be satisfied when I awake in Your likeness. — Psalm 17:15 NKJV

Lay hold of this promise, and spare yourself a world of confusion and fear. How much sadness would evaporate if every person simply chose to believe this: I was made for God’s glory and am being made into His image.

As I was about to sit down and review this chapter, my daughter Jenna stepped into my office. She is as round as a ladybug. In six weeks she will, God willing, give birth to a baby girl. Can I tell you something about that infant? I love her. I’ve never seen her, but I love her. She has done nothing to earn my love. But I love her. She’s never brought me coffee or called me Papa. She’s never sung me a song or danced me a dance. She has done nothing!

Yet I love her already. I would do anything for her, and that is not hyperbole. Why? Why do I love her so? Because she carries some of me. A small part for sure but a part of me nonetheless.

Why does God love you with an everlasting love? It has nothing to do with you. It has everything to do with whose you are. You are His. You carry a part of Him. There is something of Him in you. He made you in His image. He stamped His name on your heart. He breathed life into your lungs.

Someone called you a lost cause. Someone branded you as a failure. Someone dismissed you as insignificant. Don’t listen to them. They don’t know what they are talking about. A divine spark indwells you. When you say yes to God, He blows on that holy ember, and it begins to flame. It grows day by day within you. Are you perfect? No. But you are being made perfect. He bought you and owns you and has a wild and inexplicable love for you. His love for you does not depend on you.

You are God’s idea. God’s child. Created in God’s image.

You are being made into God’s image. Print that on your résumé. You are a diamond, a rose, and a jewel, purchased by the blood of Jesus Christ. In the eyes of God you are worth dying for. Would you let this truth define the way you see yourself?

Would you let this truth define the way you see other people? Every person you see was created by God to bear His image and deserves to be treated with dignity and respect. This means all people deserve to be seen for who they are: image bearers of God.

Imagine the impact this promise would have on the society that embraced it. What civility it would engender! What kindness it would foster! Racism will not flourish when people believe their neighbors bear God’s image. The fire of feuds will have no fuel when people believe their adversaries are God’s idea. Will a man abuse a woman? Not if he believes she bears the stamp of God. Will a boss neglect an employee? Not if she believes the employee bears a divine spark. Will society write off the indigent, the mentally ill, the inmate on death row, or the refugee? Not if we believe, truly believe, that every human being is God’s idea. And He has no bad ideas.

You and I were made by God to know Him and make Him known.

Yet many adults spend their grown-up years saying the same. “Look at me drive this fancy car!” “Look at me make money!” “Look at me wear provocative clothes, use big words, or flex my muscles. Look at me!”

Isn’t it time we grew up? We were made to live a life that says, “Look at God!” People are to look at us and see not us but the image of our Maker.

We can put our full hope in our God. He loves us. He has good planned for us. He made us in His image. Period. Come share your thoughts with us on our blog. We would love to hear from you! ~ Devotionals Daily