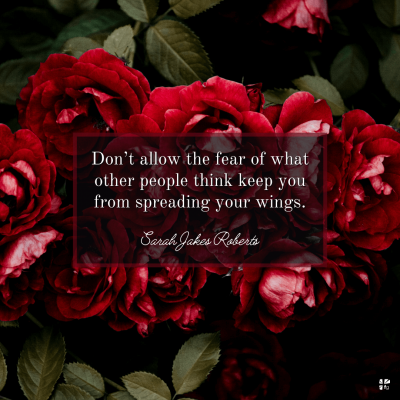 Making God laugh with your plans isn’t something you have to avoid at all costs. While your mind is busy producing, creating, and planning, don’t allow the idea that your plan may not pan out the exact way you have in mind keep you from producing at all.

If you’ve come to a place where you’ve accepted your identity as an extension of God on Earth, it may take some time for you to figure out exactly how you’re supposed to show up and where you will be most effective. That means there may be moments when even your best efforts end in failure. Failure is not a curse word, and even when we fail in the pursuit of what God has for us, we have a promise that it will all work out for our good.

Have you heard the story about Peter, one of Jesus’ disciples, attempting to walk on water? Jesus’ disciples were in a boat in the middle of a storm. Right in the middle of them losing it, Jesus appeared and told them to be calm even though the storm was raging (Matthew 14:28). I’ll paraphrase, but Peter’s response was basically, “God, if that’s really You, command me to come to You.” As in, Jesus, don’t stop the storm, but allow me to walk through the storm the way that You are doing.

There’s a whole sermon in that, but stay focused. Jesus commanded Peter to come to Him, and for a split second Peter began to walk on the water. Unfortunately he took his eyes off Jesus, and the moment he did, he began to sink. Jesus rescued him from drowning and placed him back on the boat.

There’s much conversation about how Peter didn’t have enough faith, but I can tell you he had more faith than I would have had in the moment. He may not have completed the task the way he had in mind, but he did accomplish something he would have never accomplished had he not challenged himself in the first place.

Why is this important and what does it have to do with your journey? I want you to begin making goals for yourself without fear of failure or of the unknown. I want you to come to a place where you are content with starting to head in the right direction and that you don’t get caught up in whether you’ll reach the desired destination.

If the disciples had been anything like my siblings, when Peter was alone, they would have been clowning him for not being able to keep walking toward Jesus. Nothing would have been off-limits in the commentary, from the way Peter trembled when he saw he was sinking to how he even thought he could do it in the first place. Imagine having an audience while you step out on faith when you’re still battling uncertainty; the possibilities of failure are high.

He may not have been able to accomplish his goal, but the mere fact that he attempted the goal set him apart from anyone who could have negative feedback about what he attempted. In addition, Peter learned something about Jesus that none of the other disciples were brave enough to learn.

Don’t allow the fear of what other people think keep you from spreading your wings.

What you’re called to do may be different from the circle around you. No one but you and God may understand that for some time, but what matters is that you and God have that understanding. That’s you! If our goal is to become more and more like the image of our Creator, we’re going to have to step out of what we know and begin seeking out what God knows.

I feel like there’s someone reading this and God is saying that He has something He wants you to know about Him that He hasn’t shared with anyone around you. You won’t discover this revelation by staying in the boat. You will only come to this revelation by stepping out and away from those who think they know you so that you can figure out what God truly knows.

Sometimes we think that we need to step away from people forever while we pursue what God is commanding us to do, but the truth is that there will be instances when you only need to step away long enough to get a revelation. Peter gets back in the boat. Peter keeps walking with the disciples. Peter keeps connecting with the world around him, but he is not the same Peter he was before he stepped out of the boat. Peter and Jesus have an insider understanding that only the two of them know. Maybe you just need to step away from your circle long enough to get some inside information about who God is and what God can do with you.