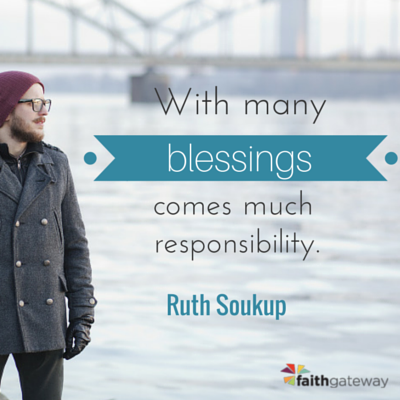 Overspending and mindless shopping can be destructive habits, whether we have a little or a lot. In fact, mindless spending might even be a little easier to keep in check when money is very tight, or at least when credit is not readily available. The real problem comes for those of us with a little more to spend, those of us who have fooled ourselves into thinking we are securely middle-class. We buy into the lies and myths, telling ourselves, Sure, shopping can be dangerous if you can’t afford it. But I can afford it, and it is fun. I’ve never missed a payment. I’ve got great credit. Besides, I’ve earned it, and I deserve to have a little fun. It’s my money. Why shouldn’t I be able to buy whatever I want, whenever I want?

As a Christian, I decided I had no choice but to look at the way I spend my money in a different light.

The world may be full of ideas about when and where and how much we spend, but the Bible also has a whole lot to say about how we use our money. My favorite lessons are found in the parable of the bags of gold:

Again it will be like a man going on a journey, who called his servants and entrusted his wealth to them. To one he gave five bags of gold, to another two bags, and to another one bag, each according to his ability. Then he went on his journey. The man who had received five bags of gold went at once and put his money to work and gained five bags more. So also, the one with two bags of gold gained two more. But the man who had received one bag went off, dug a hole in the ground and hid his master’s money.

After a long time the master of those servants returned and settled accounts with them. The man who had received five bags of gold brought the other five. ‘Master,’ he said, ‘you entrusted me with five bags of gold. See, I have gained five more.’

His master replied, ‘Well done, good and faithful servant! You have been faithful with a few things; I will put you in charge of many things. Come and share your master’s happiness!’

His master replied, ‘Well done, good and faithful servant! You have been faithful with a few things; I will put you in charge of many things. Come and share your master’s happiness!’

His master replied, ‘You wicked, lazy servant! So you knew that I harvest where I have not sown and gather where I have not scattered seed? Well then, you should have put my money on deposit with the bankers, so that when I returned I would have received it back with interest.

‘So take the bag of gold from him and give it to the one who has ten bags. For whoever who has will be given more, and they will have an abundance. Whoever does not have, even what they have will be taken from them. And throw that worthless servant outside, into the darkness, where there will be weeping and gnashing of teeth.’ – Matthew 25:14-30

This simple parable tells us pretty much everything we need to know about the importance of good stewardship.

How we spend our money matters a lot to God. We aren’t simply advised to use our money wisely; we are called, in no uncertain terms, to be good stewards of the resources we have been given, regardless of how much we have.

Our money is not our own.

In the parable of the bags of gold, the master expected his servants not to hoard or squander his money, but rather to use it wisely, taking calculated risks and making investments that would grow his wealth. He expected them to work hard, to put off immediate gratification for the promise of a bigger reward down the line. He gave each of his servants a different amount, based on their abilities, but he gave each of them something. He knew they all had the potential to make good decisions with the money, and he was angry at the servant with one bag of gold, not because he failed to use the money wisely, but because he didn’t even try.

Whoever can be trusted with very little can also be trusted with much, and whoever is dishonest with very little will also be dishonest with much. So if you have not been trustworthy in handling worldly wealth, who will trust you with true riches? And if you have not been trustworthy with someone else’s property, who will give you property of your own?

With many blessings comes much responsibility.

As we’ve already discussed, simply being born into a country with access to education and health care and transportation, and living in a home with electricity and heat and running water, puts us, regardless of income, in the top stratum of the world’s population. Poverty in the United States looks a whole lot like wealth in other countries. Buying whatever we want when we want it, spending on credit when we can’t afford it, and trying to keep up with the Joneses just because it seems like the thing to do are not signs of being good stewards of God’s money. While popular culture would have us believe our spending is all about us, the truth is that what we spend is really all about God.

Are you using the resources you have been given to the very best of your ability? Have you handled your worldly wealth with wisdom and discernment? Are you being trustworthy with God’s money?

Let’s reboot our spending habits based upon what God says in His Word! Are you ready to start today? Come join the conversation on our blog! We’d love to hear how you are stewarding the gifts, talents, and finances God has entrusted to you! ~ Devotionals Daily