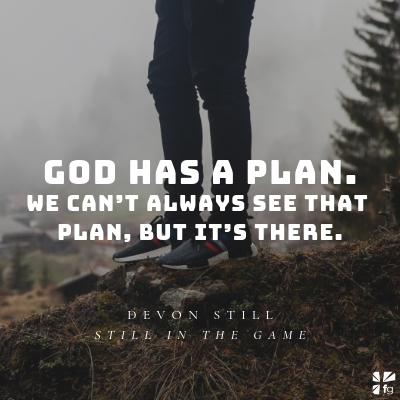 Leah’s surgery was scheduled for September 25, right in the middle of our bye week. Even that felt like God nodding at us. As if the big man upstairs took a look at the NFL schedule when considering when Leah should get her surgery and timed everything just right, so we all could be together on that beautiful day — the day when she would finally get that mass, that tumor, and that cancer out of her body.

But the day before surgery, Leah got real scared. “Are they gonna cut me with a real knife?” she asked me. At first I didn’t know how to respond. She didn’t need to know the gory details, I thought. She was too young. Too innocent. So in a typical knee-jerk parent reaction, I said, “No, no. Not a real knife.” What was I doing? I didn’t want to lie to my daughter. She deserved the truth. But I was too scared to tell her the truth. Kids don’t quiet that easy though. Especially curious kids like Leah. She kept asking questions, and honestly, I’d never seen her so scared.

I tried to distract her with a puzzle. I pulled up some funny YouTube videos, but the girl wasn’t interested. She was terrified.

I needed help — and I was learning where to get it. I turned to God.

And God answered. It wasn’t the voice of God like some people talk about. My grandma used to say she heard God talking to her, in a God-like voice, like you’d expect from some old movie or something. I didn’t get that. Instead, I trusted God — and the words just came to me.

“Yeah,” she said. “If surgery hurt me, I wouldn’t be able to play football, would I?” “No. But are they really gonna cut me? With a knife?” I pulled up my pant leg. “You see this?” I said, pointing to the six-inch scar stretching from my ankle halfway up my shin. “That’s from the surgery I got my sophomore year at Penn State. The doctors had to cut my leg open and put screws into it.”

“I didn’t feel a thing. They gave me medicine so I would sleep right through it. The same medicine they’re gonna give you.”

“I’ll be honest with you, it hurt a little bit the next day, and for a few days after that, but they gave me medicine to make most of the pain go away, and the pain was only temporary. The pain went away. I’ve been healed and fine ever since.”

I hiked my pant leg up even further. “And see this? This was from my freshman year in high school. I was only fourteen years old, so just ten years older than you are right now when I went in for my first surgery.”

“And did that one hurt?”

“Nope. Same thing. They put me under anesthesia. That’s the medicine that makes you sleep, so I didn’t feel the surgery at all. And yeah, it hurt for a little while afterward. I had to wear a cast from my toes all the way to my hip!”

“Really?” “Really,” I responded. “Will I have to wear a cast?” “No, no. And your scar won’t even be that big.” “I’m gonna have a scar?” “Just like your dad,” I said. “Scars are your warrior wounds. It shows that whatever tried to stop you didn’t succeed. You should be proud that you’re able to show your scars because it means you’re a survivor.”

I showed her the “warrior wound” on my back, too, and talked some more about how a little pain is totally worth it, because pain goes away. It doesn’t last. “And once that pain is gone, once the treatments are all over, you’ll be free of cancer and stronger than ever for getting through it.”

“No, baby. It’s a good thing. You’ve met all those nice doctors and nurses at CHoP. You know they all adore you and think you’re the selfie queen.”

“So they’re gonna take care of you. And this surgery is going to get that cancer out of you.”

“Well, that’s good,” she said. She was quiet for a bit. Then she looked up at me with a big smile. “I guess I won’t be scared then. It’s okay. I want the cancer out of me.”

I didn’t expect the conversation to take that turn. “What does God sound like to you?”

“He sounds good!” she said.

“He tells me He believes in me and to believe in Him, and if I do He will help me. And no matter what I go through, He just says, ‘Be strong!’”

“Yeah. But God talks in all different ways.”

It felt like a revelation, and that revelation changed everything. As corny as this might sound, it honestly felt like the secret to life was suddenly made clear to me, and the secret is this:

God has a plan.

We can’t always see that plan, but it’s there. Whatever you’re going through is just preparing you for something else. Something bigger. Something you probably can’t even imagine. You just have to pay attention. Learn the lessons God’s trying to teach you. Stay in the game. Don’t give up. Fight for four quarters. Overtime if you have to. Keep going. And someday, someday, if you stick it out, all that stuff that didn’t make sense is gonna make some sense. It’s gonna pay off. It’s gonna add up to something.

I knew, and I would continue to know from that moment forward, that whatever new struggles might come my way, whatever challenges or obstacles might appear in my life, they were just preparing me for a future that God has in store for me.

That revelation made me less afraid.

Knowing that everything we do in life is about learning, growing, gaining strength, preparing for a path we can’t see but that God is laying out for us — just knowing that somehow makes the task of facing life’s struggles that much easier. Faith in God doesn’t make the struggles go away. The obstacles in life don’t magically disappear because you pray. But the fear of those struggles? The terror of believing that each new obstacle is somehow gonna be the end of you? That goes away. That makes you stronger. And that is powerful.

Excerpted with permission from Still in the Game by Devon Still, copyright Devon Still.

Happy Superbowl Sunday! Are you still in the game? If you’re in the middle of a crisis or struggle, have you thrown a Hail Mary pass? God is with you and He is for you. Stay in the game! Come share your thoughts with us on our blog. We want to hear from you! ~ Devotionals Daily

Or lean more about the book in the FaithGateway store >