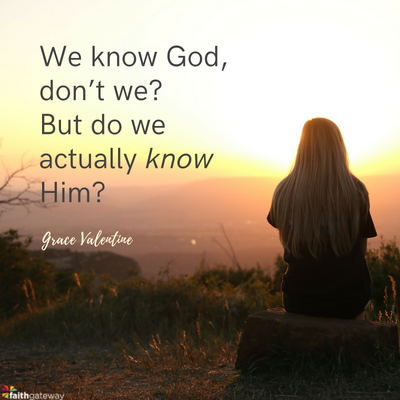 The friend zone. It is so frustrating when you are interested in a guy and he friend-zones you. For some reason, I go way back into my childhood when I think about friend-zoning, even though back then we had yet to establish the name for that dreaded place.

Lizzie McGuire was my favorite TV show growing up. Lizzie (Hilary Duff) was oblivious to the fact that Gordo (Adam Lamberg) liked her. Gordo was always there for Lizzie, and I mean always. They had been friends since they were babies. But for most of the series, Lizzie considered Gordo “just a friend” and didn’t seem to notice how Gordo felt about her.

What does it look like for us to friend-zone God? Well, we know God, don’t we? But do we actually know Him?

Do we communicate with Him daily? Do we spend enough time studying His Word so that we know His personality, His characteristics? Or do we just talk to Him when we need Him or spend just enough time reading the Bible to say we do when asked?

Yes, God is always there when we need Him, just like Gordo was always there for Lizzie. But when we don’t “need” God, are we content to keep the relationship at a lower level than He desires? Do we not talk to Him and not study Scripture to the point that we become oblivious to how much more He wants from our relationship? If something of the world that’s really attractive comes along, do we worship it more than God? I’d be lying if I said I’ve never left God hanging for a cute guy with good hair.

Let’s explore one more area of questions. Would you give your life for God? I think most believers would say that we would if confronted with a situation where someone pointed a gun to our head and demanded that we deny God or lose our life. Part of the reason most of us would say yes is because it’s an extreme hypothetical situation that none of us is likely to face. Plus, when considering that question, it seems noble to die because we wouldn’t deny God.

But how often do we deny Him in ways that aren’t immediately life-threatening? It could happen when a coworker uses His name in vain, and we say nothing. It could happen when a guy wants to take a relationship to a physical level that goes against God’s Word. It could be at a party when a friend asks if we want to try something that will make us feel really good.

When I battled against loneliness, I would ask God why I didn’t have friends who cared about me. I didn’t feel like I fit in with any group or clique, and I didn’t understand why. I needed friends to be happy. Now I realize that I was searching for people who could make me happy when only God could give me the joy I was missing. God wired us to live in community, and He desires for us to find loving Christian friends. However, we can still encounter seasons of loneliness when we think that finding joy is dependent upon our popularity.

Jesus was lonely at times. He didn’t emerge from His loneliness by trying to become popular. In fact, during times of loneliness, He often did things that were the opposite of what might have made Him popular. Instead, He would go off by Himself to pray, and that would give Him strength. Although lonely, Jesus never strayed from His mission. He never friend-zoned His heavenly Father, and we should follow that example.

When we combat loneliness by doing what this world says, we are friend-zoning the only One who can satisfy us. That only compounds whatever problems we are facing.

The world tries to portray God in ways that would keep us from believing He wants to be much more than our friend. Some of those false portraits paint God as an authoritative ruler, or some- one who’s so far removed from us that He doesn’t understand how we feel. Referring to God as “The Man Upstairs” is wrong for various reasons. For starters, God doesn’t want to live a floor above us; He wants to take up full-time residence in our hearts.

We need to commit to no longer friend-zoning God. We need to stop ignoring His requests to pursue Him to the degree He pursues us. We need to stop chasing the ways of the world and leave God “over there,” even as He cares for us while we live in ways He wants to help us change.

God created us with free will. He has given us the freedom to eye what the world offers. If you’re looking in that direction, I pray that you will turn your eyes toward Him and recognize that He is the only one who can satisfy your desire to feel pursued. He’s not just pursuing you; He’s pursuing you with a perfect, unconditional love.

Despite your imperfections, He loves you, desires you, and is calling out for you to remove Him from the friend zone. He has the answers to the questions you’re asking. He can satisfy what you are pursing.

But you need to stop liking Him and start loving Him.

Excerpted with permission from Am I Enough? by Grace Elaine Valentine, copyright Grace Valentine.

Come share your answers to the above questions. We would love to hear from you!