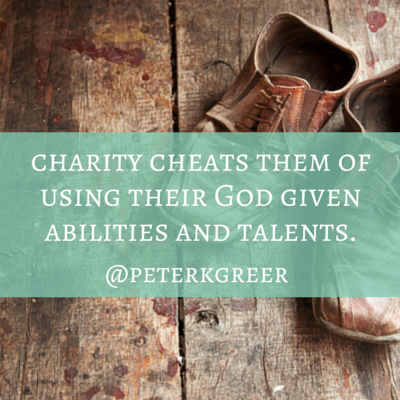 The Story of Fadzai

Every time an employer discovered Fadzai Nhamo, a woman from Zimbabwe, was HIV positive, the door shut. “Life was difficult for me when I came to Harare,” Fadzai later remarked. When Fadzai speaks, she covers her mouth to hide her missing front teeth, a daily reminder of the brutal way she contracted HIV. “I left my hometown after someone had beaten and raped me,” she said. Following the assault, a friend took her to a clinic at the capital, Harare. There she discovered she was HIV positive. “When my husband found out I was sick [with HIV], he disappeared,” Fadzai commented later. “I did not have a place to live.” After her husband’s abandonment, Fadzai was left a single mom, a stranger in a new city. With no place to call home, she moved from place to place with her children.

It is possible to debate many points of theology, but our faith clearly calls us to care for Fadzai, an individual who has been exploited and abused. She is the widow and foreigner so frequently mentioned throughout Scripture. When we hear the story of Fadzai’s mistreatment and understand the message of grace in Scripture, we are compelled to respond.

John, one of Jesus’s closest friends, asked the question,

If anyone has material possessions and sees a brother or sister in need but has no pity on them, how can the love of God be in that person? — 1 John 3:17

James, the brother of Jesus, questioned,

If one of you says to him, ‘Go, I wish you well; keep warm and well fed,’ but does nothing about his physical needs, what good is it? — James 2:16

Followers of Jesus have a rich history of responding to a gospel message of compassion. From New York City to New Delhi, the homeless find shelter and a compassionate response in Christian missions. In rural areas lacking access to healthcare, medical clinics have been built. Through prison ministry, thousands of prisoners are visited each year. Soup kitchens run by churches are a fixture in many cities.

Fadzai was one recipient of such care. After arriving in Harare, she found a charity that provided aid. But as with most charities, the support eventually ended. “I had a big problem when the charity that I was getting my food from stopped,” Fadzai lamented. It is unclear whether Fadzai was better off as a result of the church’s support, despite its good intentions. Although charity helped Fadzai for a time, it did not change her situation or address the underlying issues of her poverty. She was still in tremendous need. Having learned no additional skills, Fadzai was in no better position to provide for her children.

Worse — as handouts often do over the long term — charity may have actually deepened her poverty.

In the 1990s, World Bank surveyed over sixty thousand of the financially poor throughout the developing world and how they described poverty. The poor did not focus on their material need; rather, they alluded to social and psychological aspects of poverty. Analyzing the study, Brian Fikkert and Steve Corbett of the Chalmers Center for Economic Development said, “Poor people typically talk in terms of shame, inferiority, powerlessness, humiliation, fear, hopelessness, depression, social isolation, and voicelessness.” The study highlights that, by nature, poverty is innately social and psychological.

In an informal survey, our clients at HOPE International in Rwanda affirmed that poverty is more than a lack of material possessions. In 2011, a lead trainer of a savings program in Rwanda posed a question to a group of twenty individuals within a savings group, most of whom lived on less than $2 a day. “How do you define poverty?” he asked.

Listed below are their answers in the order provided:

1. Poverty is an empty heart.

2. Not knowing your abilities and strengths.
3. Not being able to make progress.
4. Isolation.
5. No hope or belief in yourself. Knowing you can’t take care of your family.
6. Broken relationships.
7. Not knowing God.
8. Not having basic things to eat. Not having money.
9. Poverty is a consequence of not sharing.
10. Lack of good thoughts.

As can be seen from the above, money was mentioned only once. If poverty is not only a material deficit, but also not knowing one’s potential, abilities, and strengths — as well as having an empty heart — then traditional charity neglects to address the root causes of poverty.

In Fadzai’s situation, receiving handouts did not enable her to recognize her abilities, maximize her potential, or believe her situation would ever change. When aid stopped, Fadzai said she hit the nadir of her life. Aid — a short-term solution — left her hopeless, despairing, and powerless in the long term. Suicidal, Fadzai felt unable to take care of her basic needs, while charity deepened her hopelessness.

The downward spiral of charity has been experienced by countless people eager to do good and serve the poor, but it is best described in Toxic Charity by author Bob Lupton. In this book, he details the negative cycle of giving related to traditional charity.

• “Give once and you elicit appreciation;

• Give twice and you create anticipation;

• Give three times and you create expectation;

• Give four times and it becomes entitlement;

• Give five times and you establish dependency.”

Even when offered with compassion, traditional charity, which should be only a temporary fix, can often enslave individuals — becoming a poverty trap — if extended into the long term. Instead of focusing on the potential of those like Fadzai,

charity cheats them of using their God given abilities and talents.

The church is beginning to recognize the pitfalls of traditional charity and rediscover an alternative way of helping.

The Rest of the Story

Providentially, Fadzai was told to go to Central Baptist Church, Harare, for a very different form of assistance. Embracing its mission to care for the widow, the orphan, and the vulnerable, this church recognized that there are ways to help those in need beyond starting a soup kitchen. The members discovered a new approach to assisting Fadzai through the seemingly audacious belief that even impoverished people are capable of contributing to their own development. This approach was based on the belief that the greater gift they could give would be to equip Fadzai to provide for herself. Fadzai was open to a new opportunity and gathered with a group each week to participate in a training and savings program.

When she first heard about the program and the requirement that every week each member save some amount of money, she thought, “How do these people think I am going to get money for this?” Fadzai received business and biblical training as she gathered with eighteen other members. She understood grace and forgiveness through the gospel message. She was coached and mentored as she learned basic accounting. If she could not contribute the necessary savings for one particular week, another member covered for her. As this group started accumulating a greater amount of savings, they started making investments in each other’s businesses. Eventually, Fadzai was able to receive a small loan to purchase farming supplies, seeds, and equipment and to begin farming a small plot of land with other members. Believing she had skills and abilities, she began to dream about the future — seeing a pathway out of poverty. But Fadzai also realized that change is more than economic. “I was also taught to pray about everything,” she explained. In her case, God answered these prayers in ways she never thought possible. Miraculously, even Fadzai’s husband came back.

Fadzai’s life is spiritually and materially different because a local church stopped simply pitying her.

Willing to invest in her, the church saw what she had — and who she was in Christ — rather than what she lacked.

Fadzai learned to forgive in relationships and now attends church regularly with her family. In her words, “For me, that’s a very big deal.” This hardworking mother, who used to be dependent on handouts, is now weekly earning a far greater amount of money than she ever received from charity. And this all occurred in less than a year’s time.

Despite the pain of the past, the future looks bright for her. Thankfully, more and more organizations are working to create an alternative to the charity trap.

Excerpted with permission from For the Least of These: A Biblical Answer to Poverty by Anne R. Bradley, Arthur W. Lindsley, copyright Zondervan, 2015.

Join the conversation on our blog! We’d love to hear your thoughts about moving beyond charity and empowering those in poverty!