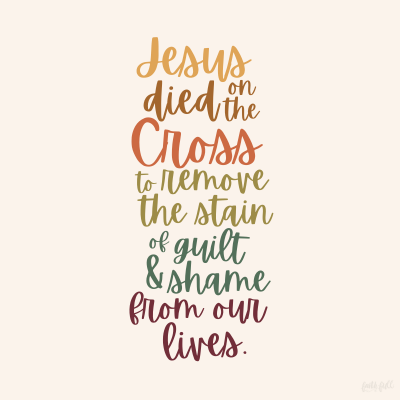 Shame, by formal definition, is a painful feeling of having lost the respect of others because of an improper behavior, sin, or label of incompetence. It arises from dishonor or disgrace stemming from something regrettable, unfortunate, or outrageous.

Chronic Guilt and Shame Can Lead to Depression

Our main reason to be concerned with guilt and shame in this book is this: these two states are commonly associated with major depression. Situational depression is usually the result of a major loss in a person’s life — it may be a spouse, a child, a marriage, a job, a home, or some other major loss.

Guilt and shame are both rooted in what should not have occurred as much as in what did occur. Guilt is a state of having done something wrong or having committed an offense, legal or ethical. Guilt is a painful feeling of self-reproach for having done something that we recognize as being immoral, wrong, a crime, or sin. Shame generally arises from what another person has done, something that society widely recognizes as immoral, wrong, a crime, or sin — shame is the reflection onto the victim of an abuser’s bad behavior.

Guilt and shame are both rooted in what should not have occurred as much as in what did occur.

Guilt and shame evoke different responses in us. Shame tends to create feelings of deep sorrow and sadness, as well as a lack of self-worth. Guilt produces a certain amount of anger because we feel trapped at being caught or at having fallen victim to our own weaknesses. In both emotions, however, a feeling of being worthless, hopeless, or helpless may result. These feelings, in turn, can lead to depression, anger, anxiety, and an array of other toxic emotions that stimulate a stress response.

Many people link shame to painful memories of past rejection, which produce feelings of helplessless and hopelessless, or of extremely low self-value. These feelings result in depression in some, but in others, they may lead to anger, resentment, or rage.

Both guilt and shame create an endless circle of negative thinking. These emotions never lead to emotional freedom, strength, or health — either emotionally or physically.

The Great Weight of Guilt and Shame

People who feel guilt and shame often walk with stooped shoulders, their heads hanging. They convey the appearance that they want to hide. It’s an instinctual expression among us human beings to cower or seek to hide if we find ourselves in a situation that might cause us to be deeply embarrassed, guilty, or ashamed. It’s not uncommon, for example, to see those arrested attempt to hide their faces or to turn away when the glare of public scrutiny — or the television camera of the nightly news team — lands on them.

Adam and Eve felt great shame in the Garden of Eden after they had disobeyed God. They attempted to hide from Him. They felt self-conscious, naked, exposed. That’s what shame does to us. It leaves us feeling unworthy of approval, self-conscious, and as if our lack of value has been exposed. Shame makes us feel as if every person we encounter knows all about us, is scrutinizing us, and is critical of us — even if we admit with our rational minds that the vast majority of people we encounter don’t know us or don’t care about us.

Where do we learn shame?

Sadly, many people learn shame as children. And even more sadly, they learn it from their parents, who ridicule or humiliate them in front of their siblings or peers. A teacher, coach, or other authority figure, or even a school bully, can humiliate and shame children.

Sexual and physical abuse also may cause children to grow up feeling shame. Learning disabilities, such as dyslexia or attention deficit disorder, may cause children to be tagged as stupid, slow, dumb, or unable to learn. This is humiliating to youngsters — it may lead to long-standing feelings of shame.

Unfortunately, many children who bear the burden of shame carry their misery into adulthood. Adults who have deeply internalized shame often fear intimacy and bring commitment problems into marriage relationships. They struggle to maintain a marriage, sometimes drifting from marriage to marriage and breakup to breakup, never quite able to see their own self-sabotaging behavior as associated with the shame they carry like a giant, invisible weight deep within.

Adults who feel shame can end up enduring multiple affairs and divorces, a seemingly endless string of jobs, and can seem to sabotage close relationships. Their shame sends them wandering in something of a personal relationships wilderness. The repeated failures, of course, only add to the feelings of worthlessness, failure, and grief. Deep down, the shamed person feels he is genuinely unlovable and unworthy of anyone’s care.

Deep depression often lies at the end of this emotional road. Shame may also lead to drug abuse, alcoholism, eating disorders, and out-of-control gambling, as well as other compulsive behaviors.

Countless millions of people in our nation suffer tremendous guilt over past lifestyle choices or abuses such as affairs, abortions, sexual molestation, rape, and many other circumstances.

One woman who was riddled with guilt came to me a few years ago suffering from chronic fatigue and severe fibromyalgia. During Jane’s exam, I learned that she had been through a divorce about two years prior to the onset of these conditions.

Right before her divorce, Jane discovered that her husband was having an affair with their neighbor, who also happened to be Jane’s best friend. She found out about the affair in a most unusual way. Her best friend’s husband learned about the affair first, and he came to Jane’s house looking for her husband. When he found him, he gave Jane’s husband such a severe beating that the man ended up in the intensive-care unit of a nearby hospital for a couple of weeks.

Jane, the dutiful wife, visited the hospital daily to take care of her husband, never fully grasping just why her neighbor attacked her husband. After doing this for two weeks, she went to the hospital to find her husband had been released. She asked at the nurses’ station where her husband had gone, and the nurses informed her that his girlfriend had come to pick him up. Jane quickly began to put the pieces together, and when she did, she felt completely humiliated and ashamed.

I explained to Jane the difference between true guilt and false guilt. True guilt comes when we have done something we know is wrong, and we feel remorse for having done it (or at the minimum, for having been caught doing it). False guilt arises when we have done nothing wrong but we have been unwitting partners in someone else’s sin, crime, or wrongdoing. False guilt is taking on one’s self the guilt that rightfully belongs to another person. This is called “personalization,” and is one of the ten types of negative life beliefs, or cognitive distortion, we will discuss in Chapter 12.

Jane chose to recognize her false guilt, forgive her husband and best friend, and become emotionally well. The process didn’t happen overnight. It rarely does. The forgiving and releasing were a process that took about three months. But when that process was completed, Jane was amazed to find that both her fibromyalgia and chronic fatigue were gone.

LISTENING TO YOUR HEART

I believe it is especially important for people to own up to feelings of guilt or shame in their own hearts. This is a vital key to unlocking health and wholeness.

The Bible says, “The heart knows its own bitterness, And a stranger does not share its joy” (Proverbs 14:10). The hurts, pains, disappointments, delayed hopes, and broken dreams of your life are all hidden in the deep chambers of your heart.

A great deal of healing from depression can come as a person gains an understanding of the assault that the brain has made against the heart. A person first must understand that the human heart really does understand the depth of its own suffering. Ultimately, you don’t need another person to tell you how you feel — you know how you feel. You know all of the emotions that lie deep within. You may not readily know how to access those emotions, but they are there nonetheless. The goal we face is to learn to recognize what the heart is trying to say. To understand the depth of our own wounds, we each must learn the language of our own heart.

To understand the depth of our own wounds, we each must learn the language of our own heart.

A cancer survivor once explained how his heart “spoke” to him in very soft messages. He believed he might have spared himself a great deal of physical agony had he learned to listen to his heart sooner. He said:

I learned through my cancer that when the heart speaks, it does so much as a shy child tries to get her busy mother’s attention by repeatedly tugging on her skirt. Like a baby’s frustrated cry as it tries to express its needs without words, my heart sobbed in a primal language that can be understood only when we allow our heart to enter into the constant dialogue between our brain and its body… our heart has a very delicate way in which it tries to get our attention, and to hear, we must focus on our chest and not our head.4

When a newborn infant smiles at you for the first time, when the one you love sends you a sentimental Valentine’s Day card, when your teenage son puts his arm around you and says, “I love you,” where do you feel touched?

Often we touch our hands to our hearts when we feel especially loved, complimented, accepted, or overwhelmed at the generosity another person has shown. Conversely, when we feel wounded, we also feel that wound in our hearts.

The good news is that broken hearts can be mended. We can learn to cherish, nourish, and protect this most precious and sensitive part of our being.

The good news for those suffering from guilt or shame is this: Jesus died on the Cross to remove the stain of guilt and shame from our lives. I encourage you to receive His merciful, free, and generous gift of forgiveness and freedom from these toxic emotions. Then forgive yourself and move forward in your life!

Have guilt and shame clobbered you, too? The Lord can heal our hearts, those broken places which haunt us and keep us down. Forgiveness is ours through Jesus. Come share your thoughts with us. We want to hear from you about getting free from guilt and shame! ~ Laurie McClure, Faith.Full