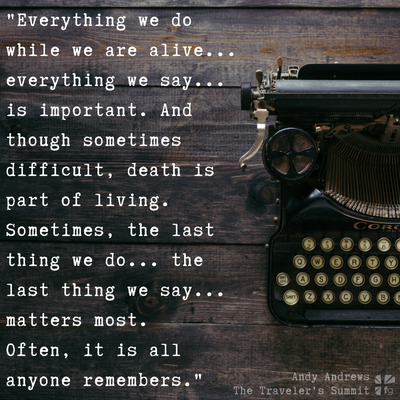 Before I formed you in the womb I knew you, before you were born I set you apart. – Jeremiah 1:5

When people ask what I do for a living, I hesitate to say, “I am an author.”

An author?  That sounds like a “big deal” and I am not one.  I usually say that I am a writer.  How did I become a writer?  Jeremiah 1:5 is the only explanation I have.  Honestly, I wasn’t even the best writer in my senior English class.

But I do love stories…

For a long time, I didn’t understand why I loved stories or why I felt compelled to write them and tell them.  Now, I believe my life’s purpose is accomplished with a story.  But the story I tell must be interesting and thought provoking — perhaps even a bit puzzling…

Why?  Because I want you to be able to use the stories I write as tools to bring people to Christ.

Simply put, I write books that Christians can give to their non-Christian friends that they will actually read, creating an opportunity for conversation between the Christian and the non-Christian.

Some people don’t understand the necessity of that conversation…

Several years ago, when my book The Noticer was released, a “Christian commentator” reviewed it like this: “While The Noticer’s storyline works and the dramatic invention is unique, one cannot help but ‘notice’ the author never ‘notices’ Jesus.”

The critic was correct.  The word “Jesus” did not appear in the book… for the simple reason that I wanted the book to be used as a tool to lead people to Jesus!

Confused?  Don’t be.  This is very simple.  Statistics show that more than 98% of people who accept Christ do so as a result of some form of interaction with another person.

But the key point to me as a writer is that less than 2% of those who accept Christ do so as the result of reading a book.

On the other hand, stories in books can set up some amazing conversations.  Especially if a wise person is ready to lead that conversation…

Did you know that The Traveler’s Gift and The Traveler’s Summit have accredited curriculums that are free and downloadable to teachers?  The Noticer, The Noticer Returns, The Heart Mender, The Butterfly Effect, How Do You Kill 11 Million People? and The Boy Who Changed the World have curriculums as well.

From elementary school to college graduate level courses, the curriculums are available for English, History, Literature, and Creative Writing.  Again, these curriculums are free and downloadable on AndyAndrews.com.  Because of this, the books are currently being used in 2,500 school systems.

These books float through America’s public school system and are taken home, discussed with and often read by the student’s parents.

The following is an excerpt from my latest release, The Traveler’s Summit.  In this scene, David Ponder — the common man chosen by the Archangel Gabriel to lead the summit — is listening to the newest arrival, Joan of Arc, as she recounts certain moments of her life.

Also present is the first “Traveler” to have arrived at the summit, Winston Churchill.  Curiously, the Prime Minister of Britain is listening as Joan describes what, for him, is history that occurred more than 500 years before his time.

“And how did King Charles respond to your plan?” Ponder asked.

Joan shrugged. “He thought me mad. But he gave me troops. The dauphin knew that we French — his father and his father’s father — had been under the English boot for three-quarters of a century. He really had no choice. Quite simply, I was his last” — Joan paused and lifted her chin — “hope.”

David and Winston shared a glance. “What then?” David asked.

“We departed. I led the army to Orleans. We arrived on 29 of April. The siege on the city had lasted seven months. We took the English fortress in nine days.”

David raised his eyebrows and looked at Winston, who nodded.

“After accepting the surrender of the city of Troyes, and every other town along the way, I led the men into Reims on 16 of July. Charles was declared King Charles VII. The following afternoon, I was at his side for the coronation.”

Winston cleared his throat. “Might I ask, Maid…,”  he began, and she signaled for him to continue. “At that time, during your extraordinary conquest of the English armies” — he paused to clear his throat again, trying to be tactful in what he was about to ask — “in the thick of the fighting, were you accompanied by our friend Gabriel?”

“No,” she answered, and when she did, Winston and David nodded as if they had both been wondering the same thing.

“Michael,” she repeated. “Gabriel accompanied me on my travels. Gabriel informed me of my destiny. It was Gabriel who foretold the hope I would bring to a hopeless cause.” Her green eyes narrowed. “But Michael attended me in battle.”

“Michael, the other archangel,” Winston corrected him, shaking his head, eyes wide in wonder.  “Michael — patron saint of the warrior, field commander of the army of God. Oh dear. This does explain a lot. A sixteen-year-old girl crushing the military might of England and all that.”

The two men turned their attention back to Joan, who was waiting patiently. “This is not new information,” she said. “Look in your archives. Read the books. It’s all there. I told everyone. I told them when I was twelve, and I told them at my trial.

“I am curious,” David said carefully. Glancing around, he saw that the entire theater was riveted, anticipating the question they felt certain he would ask. “Where were Gabriel and Michael when you were — ”

“When I was finally captured by the English? When King Charles refused to ransom me? Where were Gabriel and Michael when I was burned alive?” Joan finished.

“Yes,” David said softly. “Where were they?”

Suddenly, Joan’s face softened and she explained, haltingly at first. “Michael was terribly angry, monsieur. He had protected me for so long. Michael asked permission to kill them all but was ordered away. Gabriel… Gabriel was with me. He was with me at the stake. He knew… and I knew… that my destiny — my purpose — required that moment. And I have not a single regret.”

Joan was silent for a moment then narrowed her eyes slightly and said, “Have you read of my death, monsieur? How it was carried out? The words I said as I took my final breath?”

David shook his head. He had not.

In The Traveler’s Summit, the words Joan of Arc spoke as she took her final breath are not revealed.  Instead, the reader is offered the same opportunity as the main character, David Ponder — to read about her death and discover her final words.

As a final thought… just in case you don’t read the book… I’ll tell you what Joan of Arc said in her last moment.  It was a name.  The name.  And she said it three times.  “Jesus… Jesus… Jesus.”

Stories matter. Think about how Jesus taught… He told stories (parables) and amazed the most erudite Rabbis of the first century as well as the most uneducated common people everywhere He went. He told stories that were re-told over and over again because they were profound, understandable, and relatable. Have you found that sharing stories is a great platform for sharing your faith? Come share with us on our blog! ~ Devotionals Daily