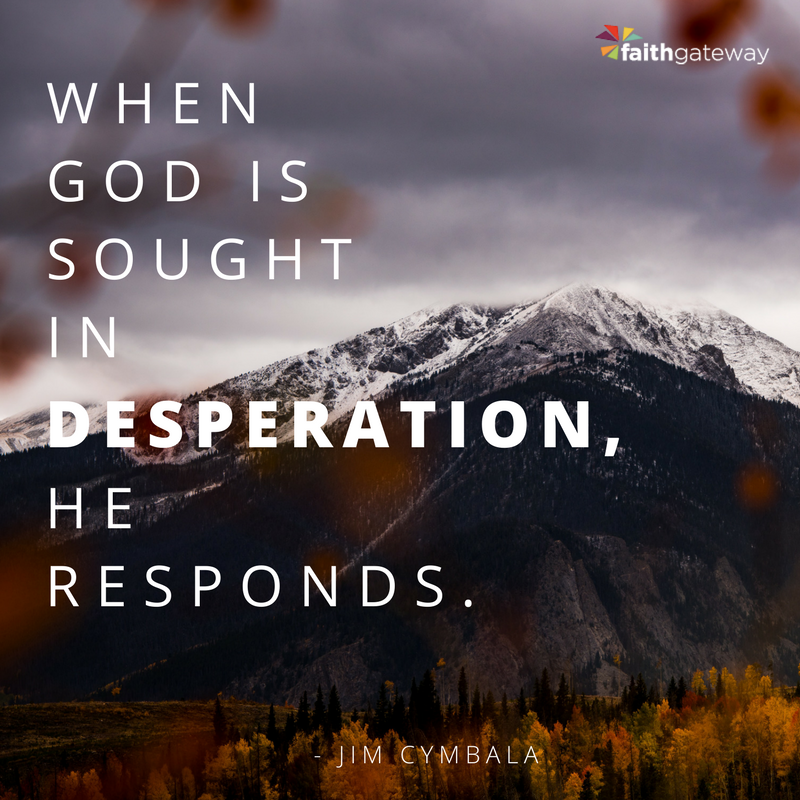 The Power of Desperate Prayer

One Tuesday, while kneeling in my usual spot during our noon prayer meeting, I heard a woman’s voice to my left. Her head was in her hands, and she was praying softly. But something about the way she prayed caught my attention. She was talking to God as if He stood five feet away.

“You know, Lord, I’m going to lose that boy to the world,” she prayed through tears. She started quietly at first, but as her pleading grew stronger, her voice became louder. “I’m going to lose him to the gangs unless You come and help me. I can’t do it by myself.” I could hear the desperation in her prayer. She cried out to God with all the urgency of a heartbroken mom.

I could hear everything she said. “You know his father is dead and gone,” she reasoned. There was a pause, and although I couldn’t see her face, I could hear her weeping. “I’m all alone trying to raise him. And You know all the voices out there calling to him. God, You have to help me!” Her tone was so bold, sincere, heartfelt, and intimate. “If You don’t help me, no one can!” she prayed, before her words dissolved into sobs.

Her prayer moved me deeply. I reached over and put my hand on her heaving shoulder and joined her in intercession for her son.

Someone once said the most awesome thing in the world is when a mere human being prays to the Creator of the universe and is heard. I felt that awe as I listened to this woman, in equal parts confidence and desperation, lift her heart up to God and pour out her soul. It was like watching one of the Psalmists crying out for help.

When someone prays boldly and desperately like this, an old church catchphrase describes it as “storming heaven.”

I have heard lots of prayers like hers at my church, and they have always moved me. How much more must they move our Father in Heaven, who loves us dearly! Desperate and soul-stirring prayers like hers result in answers.

When God is sought in desperation, He responds.

Even in hopeless situations.

After the dark period described in the Old Testament book of Judges, Israel’s desperate situation began to turn around with the prayer of a woman named Hannah. She had had enough and decided she could not take it any longer.

Hannah was one of two wives married to a man named Elkanah. The other wife had children, but Hannah was barren. According to the Bible, Peninnah, the rival wife, would mock Hannah and make fun of her, “provoking her in order to irritate her” because “the LORD had closed Hannah’s womb” (1 Samuel 1:6). Day after day, year after year, Hannah was teased and taunted, mocked and ridiculed.

Every year Elkanah’s family went to the tabernacle of the Lord in Shiloh, which was the center of worship in Israel. There the family would offer sacrifices to the Lord. But that’s also when Peninnah’s taunting of Hannah increased, to the point where Hannah wept so hard she could no longer eat (1 Samuel 1:3-8).

Each year this pattern repeated. Her husband, Elkanah, loved Hannah and gave her extra portions of the sacrifice, but that didn’t heal his wife’s pain. “Why don’t you eat? Why are you downhearted?” he would ask Hannah. “Don’t I mean more to you than ten sons?” (1 Samuel 1:8).

Then one year, something snapped inside of Hannah, and she suddenly refused to endure the taunts of Peninnah and accept her childless status.

Once when they had finished eating and drinking in Shiloh, Hannah stood up. —  1 Samuel 1:9

Hannah left the table and went to pray near the doorpost of the tabernacle. It was a moment with historic ramifications.

In her deep anguish Hannah prayed to the LORD, weeping bitterly. — 1 Samuel 1:10

She didn’t recite mental prayers as we often do; her heart went out to the Lord. Amid the backslidden and even corrupt religious establishment of that day, we see a desperate, simple woman stirred to pray a prayer that will usher in a new day in Israel’s history. In her prayer she promised God that if He gave her a son, she would dedicate him to the Lord for as long as he lived. When she finished praying, she got something to eat, and her face was no longer downcast (1 Samuel 1:18).

It was as if she knew something was about to change.

Hannah’s prayer must have been a lot like that woman’s prayer I overheard that Tuesday at church. Both of these women bared their deepest desires to the Lord, and they did so with such passion! God responds to that kind of praying.

The next morning Elkanah’s family arose and worshiped God before they headed back home to Ramah. Once there, Elkanah made love to his wife as he had so often done before, but this time “the LORD remembered her” (1 Samuel 1:19).

Hannah became pregnant and gave birth to a son.

Now, what was it that stirred Hannah to pray a prayer that changed the future of Israel?

Hannah could have chosen to live in denial. When Peninnah mocked her, she could have said, “Who cares? I’m not into kids. I don’t want to change diapers anyway!” But she didn’t. She faced the truth (as painful as it was), saying, “I want a baby, I want a son, I want to be fruitful.”

Hannah could have forgotten her heartache and just rejoiced in the fact that she was a child of Abraham, Isaac, and Jacob and a part of the covenant people of Israel. Or she could have looked at her situation and said, “I don’t have a child, so it must be God’s sovereign will that I don’t.”

But she didn’t do either of those things. Hannah’s story shows us that she did not deny her barrenness, but neither did she accept it. Her unique prayer became the channel that God both prompted and then used to turn the tide in Israel and bring much-needed blessing upon them. The lesson is clear for us today.

We must not silently accept our lack of fruitfulness and somehow justify it as God’s will for us.

Imagine if Hannah had said, “Well, I guess I’m not supposed to have a baby.”

No, as hard as it was, she honestly faced her circumstances and then desperately prayed for God to change them.

What was in her mighty prayer that God could not ignore?

None of us totally understands the power of prayer, but we know that Hannah’s prayer was powerful and effective, the kind James describes in his epistle (James 5:16). Yet if I had to guess, I would say it was both the heightened element of desperation coupled with deep faith in God. Hannah had no other place to turn. It was as if, in her great anguish and grief, she cried, “Make me fruitful, or I don’t want to go on.” She was at her end. “Give me a child or I will die!”

God heard Hannah’s weeping, and her prayer became the pathway to divine intervention. Furthermore, God wanted her story told in detail in the Bible, so future generations would recognize that Israel’s turnaround started with a lonely, heartbroken woman who just wanted to bear fruit.

I understand a little of that desperation to bear fruit. I have felt it myself.

Excerpted with permission from Strong Through the Storm by Jim Cymbala with Jennifer Schuchmann, copyright Jim Cymbala.

Have you felt that kind of desperation? What’s keeping you from bringing your desperate prayers straight to the Lord. Just like He’s standing right in front of you in one-on-One conversation. He will respond! Come share your thoughts with us on praying with your whole heart on our blog. We want to hear from you! ~ Devotionals Daily